Vancouver Island Brewing seems to be going through a bit of a rebranding, featuring a few old favourites with new names. Of those included in the new campaign is this product, which I picked up a six-pack of recently.

The Carmanah Ale is of the amber ale variety, featuring flavours of pine “as deep as a forest of Sitka spruces”. The 4.8% ABV easy drinking beverage was perfect for a long day of sipping, including drinking games, providing longevity and durability.

Joining the Carmanah Ale (aka Sea Dog Amber Ale) with new packaging is the Piper’s Pale Ale and 48 Dark Lager (formerly Hermann’s Dark Lager). The movement is using geographic coordinates, along with the tagline: “Where’s Next?”

Much like for Christmas, the Sip Advisor was looking for the perfect beer to profile on New Year’s Eve. While that didn’t come as easy as its predecessor holiday, I did come across this product, courtesy of Longwood Brewing.

The Big One IPA is constructed using hops and malted barley grown locally. At 6.5% and 65 IBUs, this beverage is sure to measure on your Richter scale and is available in 568ml extra-tall cans at private liquor stores around the province.

Sure, the beer was designed as a reference to the massive earthquake predicted to hit this part of the world sometime in the future, but I thought it was an ideal selection for the end of this BC Beer Baron project. This is the ‘big one’!

The Nanaimo-based brewery is also home to a brew pub, which I would love to visit on a future trip to Vancouver Island. The location has become “one of Nanaimo’s premier destinations” and that’s good enough for me.

What do you get when you combine two of my favourite beer styles – IPA and Saison? A very happy Sip Advisor, that’s what. It’s no surprise the folks at Moon Under Water Brewing were able to provide this treat at the recent BC Beer Awards.

The Hip As Funk Farmhouse IPA was very good. The brewery describes the 7% ABV, 35 IBU beverage as “Skittles in the attic,” thanks to the use of hops that provide flavours of tropical fruits and the mix of yeast and malts that round out the recipe. 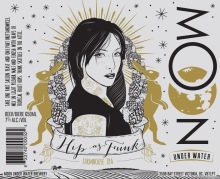 Released on International Women’s Day in 2015 and featuring the image of a strong lady on its label, Moon Under Water intended for the brew to represent the female beer drinker, who is often inaccurately depicted by the industry.

The drink’s label was designed by artist Bjauna Sorensen. “Female craft beer drinkers know what they like and unapologetically drink it,” said brewery co-owner Chelsea Walker. The IPA is available in bomber-sized bottles at private liquor stores.

We’re far from finishing our coverage of all the different products I was able to experience at the BC Beer Awards, but we’ve made it to the last from a brewery I was unfamiliar with going into the event. And what a way to wrap up, with this treat from White Sails Brewing.

Simply put, the Mount Benson IPA is everything the Sip Advisor is looking for in a beverage. The 7% ABV, 60 IBUs flagship release is available in bomber-sized bottles from private liquor retailers. In a similar vein, I’d love to try the brewery’s Snake Island Cascadian Dark Ale (6.5% ABV and 80 IBUs), which received a gold medal at the World Beer Awards in the Best Canadian Black IPA category.

Named after Nanaimo’s Mount Benson, White Sails says of the landmark: “Accept the challenge, savour the reward. With endless coastal views and picturesque forest, an ambitious hike awaits demanding adventure and a smile of­ accomplishment.” Now, imagine drinking this IPA at the mountain’s peak as your prize!

The brewery takes their name from Nanaimo’s city flag, which features a ship with white sail, commemorating those that sailed from England to settle the area. Their tasting room sits on what used to be the Newcastle Hotel, which dates back to the late 1800’s.

Another brewery introduction, courtesy of the BC Beer Awards, came when Mrs. Sip received a sample of this Gladstone Brewing selection. While Oktoberfest beers don’t rank among my favourite styles, I still found this offering to be decent.

Gladstone’s Oktoberfest continues the tradition of Bavarian brewing, where beers were produced in the spring and aged until the fall. When they were released, drinkers rejoiced, providing us with what’s known today as Oktoberfest and what should be an international holiday for all booze hounds.

The 5.5% ABV, 25 IBUs beverage is dark and is highlighted by flavours of caramel, toast and malts. The easy drinking brew has a level of hops that won’t scare any imbibers away, while also having enough there for those that want a bitter finish.

Gladstone is yet another addition to my ever-expanding map of breweries I need to visit on Vancouver Island. The company launched in 2014 and focuses on “Belgian ales, European lagers, and Pacific Northwest style India pale ales”. That covers a fair bit of ground!

My game plan for the recent BC Beer Awards was to hit as many new breweries (at least to the Sip Advisor) as possible. With that in mind, my last ticket of the evening went to Twa Dogs Brewing… and I’m so glad I spent it there!

The Mistress of My Soul Saison was a delicious choice, which helped in not regretting gifting a couple of my tickets to friends, as the night wound down. The 6% ABV, 32 IBUs Farmhouse Ale, dubbed The Mistress, is fruit and spice and everything nice. The hop content is also just right in the mid-range.

Inspired by the Robbie Burns poem ‘Verses to Clarinda’ (which the brewery says is “equivalent of today’s sexting”), the beer can be found on tap at the Twa Dogs tasting room, as well as at various pubs on Vancouver Island. This was the first I’ve seen of the brand in the Lower Mainland area.

Speaking of Robbie Burns, the Twa Dogs Brewery gets its name from one of the poet’s famous works. The brewing company is part of a larger conglomerate, Victoria Caledonian Brewery & Distillery, which also manufactures whiskey products.

Over the weekend, Mrs. Sip and I attended the BC Beer Awards, where copious new beers were tried, including many from breweries I had never had the chance of experiencing before. Among them, was this gem of a beer from Red Arrow Brewing.

The Midnight Umber Ale was among my favourite samples from the entire evening. The 5.1% ABV, 33 IBUs beverage was nice and roasty, featuring flavours of toffee, brown sugar and stone fruit, with just the right level of carbonation. Speaking of awards, the drink took home a silver medal at the Canadian Brewing Awards in the North American Style Amber Lager category. 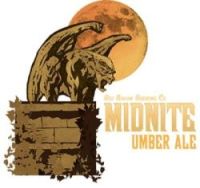 The ale is meant to honour Red Arrow’s guardian gargoyle, Christopher. Christopher has been watching over and protecting the brewery for some time and Red Arrow believes that every brewing operation needs a similar caretaker.

Located in Duncan, BC, it’s become abundantly clear to the Sip Advisor that Vancouver Island has one hell of a craft beer scene developing and a circle tour of the region should be planned post haste. Add Red Arrow to the list of must stop attractions.

While stocking up on supplies for an upcoming camping trip, the Sip Advisor picked up a bottle of this Vancouver Island Brewing new release. Isn’t camping shopping the best!

The Killer White IPA is a wheat ale-IPA hybrid, combining the best from both worlds into one delicious drinking experience. That would include flavours of banana and clove from the hefe yeast and citrus notes from the three different hops used in the beer’s construction.

Vancouver Island writes of the brew: “This white has some bite to it!” The 7% ABV, 60 IBUs summer seasonal is available in bomber-sized bottles at BC Liquor Stores, as well as other booze vendors.

Featuring a label with a jumping killer whale, I assume the beer is an homage to Vancouver Island’s whale watching industry. This season lasts from March to October each year and brings a great number of tourists to this part of the world.

Sadly, I finally worked my way through the set of four bombers Ma and Pa Sip picked up for me from Tofino Brewing, while they were visiting Vancouver Island earlier this year. And what a set those two non-beer drinkers selected for yours truly.

The Dark Lager is unfiltered and all natural. At 4.5% ABV, it is lighter than one would expect, but the roasted malts provide a strong flavour to the beverage. As the folks at Tofino put it, the results in a “delicate balance of dark and light.”

This winter seasonal is available in bomber-sized bottles, as well as on tap at the brewery for growler fills and other servings. Tofino also has a more traditional lager, as part of their lineup.

Having now tried a fair bit of Tofino Brewing’s releases, I would still love to get my hands on their Hunt & Gather Kettle Sour, Cosmic Wave Double IPA, and Spruce Tree Ale, to name a few. I have been greatly impressed with the brewery, thanks to my bomber set experience.

The Sip Advisor loves getting gifts from Mrs. Sip and Ma and Pa Sip, whenever they return from travelling… especially, when they’re of the booze variety. Therefore, when Ma and Pa Sip recently gifted me with a four-pack of Tofino Brewing bombers from their trip to Vancouver Island, I was thrilled.

Among that mixed pack was the Hoppin’ Cretin IPA, which was a very good India Pale Ale with very pleasing stats of a 7.5% ABV and 60 IBUs. This is the type of IPA that drinkers should try before they completely give up on this variety of beverage. They may come away pleasantly surprised. 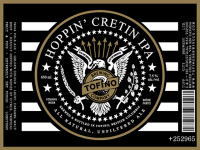 I’m not entirely sure what’s behind the name of this beer, but one description I found for the brew states: “There’s no stoppin’ the cretins from hoppin’”. A cretin, of course is an idiot, so I guess the ol’ Sip Advisor would fall under that category!

I would love to visit Tofino Brewing at some point (as well as other Vancouver Island spots) and just have to find the time to get over there. One day, a bridge will unite the mainland and island, all in the name of fine beer!