The first month of the 365-day challenge here at The Sip Advisor is in the books and what a month it was. We had visitors from all around the world and had fun taking shots at everyone from the entire east coast of North America, to couples choosing terrible baby names, to fellas looking for love in all the wrong places.

Today, in theme with the featured cocktail, I will look at some of the craziest religions out there. I have various beliefs and my own code that I follow (not a Dexter-like serial killer code, of course), but I’m not religious in any way. If you believe in something, than you have every right to. I just find these factions to be a little too far out there for my own liking.

Like the great intellectual, daring, and handsome hero Indiana Jones, I have no weaknesses… except snakes… god I hate snakes. So, given that I also don’t like church, it seems like two strikes to combine the two to form a religion and the third strike comes when you learn that the founder of the modern movement (among other leaders and parishioners) died from a venomous bite. There’s even a court case from Alabama (big surprise there), in 1991, where a pastor was convicted of attempted murder and sentenced to 99 years in prison after he forced his wife to put her hand in a tank filled with rattlesnakes. Divorce (of snakes?) was forbidden by his church, so this was his bright idea as to how he could get out of the marriage.  Snakes on a Plane would have been a drastically shorter movie if it had taken place in a church full of religious zealots and I can just see Samuel L. Jackson: “I have had it with these motherfuckin’ snakes in this motherfuckin’ church.” Famous Follower: Moe Szyslak (The Simpsons)

They don’t drink. Period. I am down with having multiple wives taking care of me, though, minus the multiple children I would have to take care of. Famous Follower: Mitt Romney (U.S. Presidential Candidate) 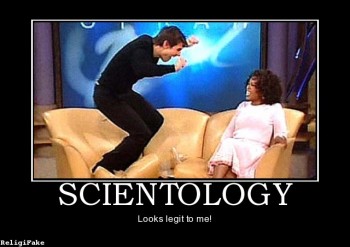 Any religion that’s origin starts with the words “Galactic Confederacy”, “alien ruler”, and hell, “spacecraft” are hard to take seriously. If you want to see a good tearing apart of Scientology, watch any episode of South Park that deals with the religion. They even angered one of their own voice talents (Isaac Hayes, who voiced Chef), who ended up quitting the show, despite the fact the animated comedy rips on every single religion at one time or another. Famous follower: While many Hollywood stars are members of the Church of Scientology, perhaps to gain connections in the industry, Tom Cruise is far and above the most recognized face of the religion and has seen his own career (and possibly marriage, too) take major damage as a result of his devotion.

Another faith that has its origins in alien beliefs. These people use the swastika as a symbol of peace… oh yeah, that’s going to go over really well. Then they have the gull to ask for territory in Israel to put an embassy for extra-terrestrials (and we’re not talking about the bicycle flying, Reese’s Pieces eating type)… even I know that’s beyond stupid… and I wrote the book on stupid. It’s called The Idiot’s Guide to Being an Idiot by The Sip Advisor. However, I will give them credit for their belief that women should be able to go as topless as men can. Equality for all, right? Famous Follower: Rael’s Girls posed for an October 2004 spread in Playboy magazine.

Hulk Hogan once ran a restaurant called Pastamania, but I don’t think even he showed such high praise and devotion to pasta, like these folks do. These peeps aren’t that bad, though, preferring to take a light-hearted view towards religion. Amongst their beliefs are that a Flying Spaghetti Monster created the universe after drinking heavily (really sounds like my type of deity), that pirates are divine beings and that every Friday is a holy day. Wow, where do I sign up? Famous Follower: One site I was reading said Jesus Christ was a Pastafarian… I should really find more reliable sources!

My main issue with this group is how can the church exist when the followers advocate that people kill themselves? It seems a little oxymoronic that they hold events like any other church, but if they truly follow what they believe, then shouldn’t they all be dead? Their gripe is with the overpopulation of the earth and therefore they advocate suicide, abortion, cannibalism (only of already dead people, duh!) and sodomy (because it doesn’t result in procreation) . Now I’m listening! Famous Follower: If I listed someone here, would they have to kill themselves? In that case, I pick Elmo.

You don’t believe in birthdays and Christmas??? Fuck it, I’m out! No further discussion… I’m out. Famous Follower: Toss up between Michael Jackson and Lark Voorhees (Saved by the Bell)… gotta give it to Lark!

I can’t even begin to delve into the cults and religions based on race that exist in the world. My head is spinning from all the information I’ve already had to research. Let’s just get on with the drink o’ the day!

For those who want to subscribe to The Church of Sip, we convene every single day here. We will exercise your demons and get you drunk while doing so. Amen!

Sip Advisor Bar Notes (5 Sips out of 5):
Cranberry Ginger Ale has to be one of my favourite finds throughout this project. Then you add Kraken Black Spiced Rum and Amaretto and you have the makings of an amazing cocktail.