As we delve into some Frangelico hazelnut liqueur, I thought it would be a good time to discuss the good, the bad, and the ugly of the nut world, or better put: the ones I love versus the ones I loathe!

Peanuts – I am a certified peanut fiend. I like most all types, with the exception being peanuts in shells and with their skins still on. I’m just not a fan of the fuss and mess that comes with them. I’m currently in the process of devising a masterful trail mix recipe, set to include honey roasted peanuts, Smarties, chocolate covered raisins, and cashews (more on them later).

Almonds – These are best smothered in chocolate and not being sold by one of those groups that charges an arm and a leg for a small box. Charity be damned when I want my almond fix. Almonds also work on their own, roasted or salted. I also have massive respect for almonds for the flavouring they lend to Amaretto, one of my preferred nightcaps.

Macadamia Nuts – The Hawaiian treat, which everyone must bring back when vacationing on the islands, is a favourite of mine and Mrs. Sip. We are particularly fond of the Mauna Loa line, which includes varieties such as milk and dark chocolate, honey roasted, Maui onion and garlic, and coffee glaze. A couple companies have also devised Macadamia Nut liqueurs, which are very tasty.

Cashews – I absolutely love cashews, but they are so darn expensive that I only get them on very special occasions (ie. when other people serve them and I’m lucky enough to be on hand to help them with their abundant supply). Figuring everything was cheaper in southern Africa, during our recent travels, I grabbed a pack of cashews, without even looking at the price. When they were scanned at the checkout, my jaw dropped, but I’m not one to leave an item behind. They were delicious and got me through some long bus days.

Pecans – I like pecans in Turtles chocolates, but little else. I think it’s because the other ingredients make up for this lackluster nut. There’s just something about the taste of pecans that I can’t wrap my head around. The texture is also an issue for the Sip Advisor.

Chestnuts – The roasted ones at Christmas smell so good, but it’s like eating warm paste, if you bother to buy a pack. My displeasure with chestnuts has even caused me to question my enjoyment of the yuletide classic The Christmas Song, which opens with the line “Chestnuts roasting on an open fire”…

Walnuts – It’s amazing how odd these nuts look, inside their cases. They remind me of a turtle shell and don’t look very appetizing. I think I turned on walnuts when considering the work it takes to get one open, using a nutcracker (which, given its name, brings about many images of horror) and then having to clean up the mess that creates.

Corn Nuts – These are the jawbreakers of the nut world and while they come in many interesting flavours (some of which I’d like to see brought over to other nut and even potato chip options), I just don’t enjoy the munching experience that comes along with corn nuts.

There are also a few nuts that I just don’t have any opinion on one way or the other. These include hazelnuts (funny enough, given today’s liqueur choice), Pistachios, and Brazil Nuts. Have I missed anything?

As we continue to celebrate the gloriousness that is the Sip Advisor (with my recent birthday and all), today we will look at the greatest writers out there in the land of fiction. Write-on my brothers and sisters!

It seemed like a good idea for writer Jack Torrance to take a job as a caretaker, looking after the massive Overlook Hotel estate in the Colorado mountains over the winter off-season… especially when he could use the solitude to get down to work. Only problem is the silence and seclusion turned an already damaged man into a complete psychopath, set on hunting down his own wife and son. Remember, “all work and no play makes Jack a dull boy!” 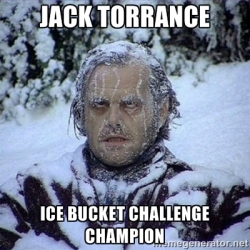 This often pretentious dog considers himself a future legendary scribe, except for the fact that for the longest time, he only talked about writing the great American novel, never sitting down to actually pen it. When he finally does, Faster Than the Speed of Love, is shredded by critics. His follow-up self-help title Wish It, Want It, Do It becomes a best seller, but the fame and fortune for Brian is fleeting, as he lets it all go to his head and alienates those that love him.

I would never expect my work to get me into trouble (unless I give a liquor company a bad review and they boycott serving me!), but that’s exactly what happens to Paul Sheldon, after he decides to end his popular series of romance novels. He just so happens to also be in the custody of his ‘number one fan’ Annie Wilkes, when this conclusion is published and that leads to a whirlwind of pain, instead of being nursed back to health by the former medical professional.

It’s pretty easy to get ideas for your best-selling mystery novels when real-life murders seem to follow you around like you’re death personified. Jessica Fletcher may reside in the sleepy, rural town of Cabot Cove (where there’s an out-of-proportion murder rate), but thanks to her success as an author, she often travels the world and… you guessed it, comes across even more brutality. At least she’s always able to solve the crime, outwitting bumbling police officers everywhere.

Along with being a sidekick and companion, Dr. John Watson also took it upon himself to record the extensive case files of Sherlock Holmes. As a fan of a good mystery, I wonder where we would be without the writings of Dr. Watson (who was originally to be named ‘Ormond Sacker’). Dr. Watson becomes a biographer of sorts for Holmes, largely because he can’t stand others taking and receiving credit for the solving of high-profile crimes.

Made up of 18,000 islands, Indonesia is home to many unique people. Perhaps not as visible as people living under the six recognized religions in the country, of which citizens have to pick one and can only marry outside of their religion if one person converts, are the many tribes that inhabit some of those islands. Let’s take a look at some of those fascinating folks!

With all the zombie fiction that exists today, it’s not surprising that some have gone on to take it all a little too seriously… but what if those people had no access to any media and up until about 1970, believed they were the only people that existed. Living high above the forest floor in treehouses (which are also used to mark the passage of time), for fear of “walking corpses” at night below, the Korowai are cannibalistic, while also being hunter-gatherers. Numbering 3,000 people, the tribe is expected to vanish with the next generation as more and more young members leave for Dutch missionary settlements.

Fellow cannibals (not of the Fine Young variety!), the Asmat had a feared reputation as headhunters and just being scary folks. Any explorers landing nearby would be met with loud noises and explosions of white powder, causing them to flee. The group (with a population of 70,000) is famous for their woodcarving, which is collected worldwide, even bringing Michael Rockefeller (yes, of that Rockefeller family) to Indonesia. When Rockefeller disappeared, the Asmat were launched into the public eye and given their way of life, you can only assume what happened to Rockefeller’s never-discovered body.

Called Sea Dayaks (I think they were trying to be derogatory) by British Colonists, this tribe was constantly at war with other factions and were known for headhunting, both acts necessary for life on an overcrowded island. The skulls collected by Iban warriors were regarded as their most-prized possessions. The people also took a lot of stock in jars and brass instruments, which they believed depicted wealth. Today, the Iban have largely evolved. Although some still live in traditional longhouses, these homes have been equipped with modern technology and utilities.

At average heights of under five feet, the Yali are officially recognized as pygmies. If you want to visit the Yali, you better be prepared for an arduous journey through treacherous trails that wind through the Jayawijaya Mountains. Once you get there, things may not get much better, as the tribe also has a history of cannibalism, going so far as to grind their victims bones to dust, ensuring they would never return. That said, the tribe’s women get to live in their own houses, while the men reside in communal homes. Each family has their own vegetable garden, so they do have that going for them.

Yet another group of ferocious warriors, who had to constantly fight to hold their land, thought to be the most fertile on the island. Unlike others, the Dani were not cannibals, but they are unique for turning their most honourable chiefs and warriors into smoked mummies, which they gladly put on display for visitors to the tribe. Also, after an enemy was killed, the Dani would engage in a two-day dance-a-thon, showing off weapons and other possessions taken from their victim(s). Sweet potatoes are used as currency, for trade and dowries by the Dani, so make sure to pick up some packs of yam fries before heading to Indonesia.

The Mentawai are easily recognizable thanks to their heavily tattooed bodies and sharpened teeth, which they do because they believe it makes you beautiful and elegant. I’m not sure vampires would agree, but they can’t even see themselves in mirrors anyway! The tattoos are used to record age, social status, and profession. Children receive their first tattoo at 11 or 12 years old on their upper arms. Then, at the age of 18, tattoos are added to the thighs. Finally, the rest of the body, head to toe is tattooed. The tattoos are important for Mentawai afterlife, helping tribal members recognize family based on the designs.

Indonesia: End of the Line

As people around the world prepare to celebrate the coming of the New Year, another unique Indonesian custom should also be noted: Hindus living there celebrate a Day of Silence, which includes no work, travel, electricity, entertainment, talking, or eating. This causes the streets to empty, the airport to shutdown, and tourists to be restricted to their accomodations. Only emergency vehicles carrying passengers with life-threating issues and women in labor are allowed.

Sip Advisor Bar Notes (4 Sips out of 5):
What a perfectly titled cocktail to end the Around the World project, of which I have greatly enjoyed! And we went out with a bang, as this drink is very good, warming the body and soul. How can you go wrong with combining bananas (Pisang Ambon) and nuts (Frangelico)!? The Crushed Peanuts for garnish were a nice touch for a snack to go along with the martini.