Each week, the Sip Advisor will alphabetically travel the United States, discovering the best each state has to offer in a variety of subjects. I’m going into this stop with some apprehension, as Rhode Island isn’t even an island. If you lie about that, what else are you hiding? Anyway, let’s join high society in The Ocean State and have us a little fun:

Motto: “Hope” – While I like the simplistic nature of this motto, it feels like something is missing…

Drink: The State Drink of Rhode Island is Coffee Milk, which is made by mixing milk with a coffee syrup. Autocrat Coffee Syrup is the preferred product to use, according to the state’s own government website. In 2013, Autocrat teamed up with the Narragansett Brewing Company (once known as “New England’s Beer”) to release a Coffee Milk Stout.

Site to See: The Newport Cliff Walk is one of Rhode Island’s top tourist attractions. The trail allows visitors to walk along Newport’s shoreline and take in sights such as Narragansett Bay and a number of the mansions that make up the city. The Cliff Walk was closed from October 2012 to June 2014, due to damage caused by Hurricane Sandy.

Street: As Rhode Island was once the playground of the rich and famous, there are a number of notable mansions found in the state. Bellevue Avenue, in particular, is teeming with luxurious estates, including Vernon Court, Belcourt Castle, Marble House, Chateau-sur-Mer, and The Breakers, among others. The route became a National Historic Landmark in 1976.

TV Show: Given its enduring popularity, animated sitcom Family Guy has to be mentioned here. Family Guy is entering its 19th season, which is quite a feat, given it was cancelled after its second and third seasons before being brought back. I also wanted to give a shout out to comedy Another Period, which was set in Newport during early 1900’s.

Movie: The Farrelly Brothers have set a number of their films in Rhode Island, including Sip Advisor favourites such as Dumb and Dumber (before they head out on their road trip) and Me, Myself & Irene. Other movies from the brothers that feature Rhode Island are Outside Providence, There’s Something About Mary and Hall Pass.

Book/Author: Horror writer H.P. Lovecraft was born in Providence. His works became celebrated posthumously, most notably, The Call of Cthulhu, which created the Cthulhu Mythos. The character of Cthulhu has since appeared in countless movies, TV shows, games, songs, comics, and other works. The H.P. Lovecraft Memorial Square can now be found in his hometown.

Fictional City: Once again, we go back to the Family Guy universe, with the show being set in Quahog. A quahog is Rhode Island’s State Shell and is used in a number of the previously mentioned dishes the state is famous for. According to series creator Seth McFarlane (who attended the Rhode Island School of Design), Quahog is based on the city of Cranston.

Actor/Actress: Viola Davis, star of the TV show How to Get Away with Murder, as well as the movie Fences, was raised from a very young age in Central Falls. In 2017, Davis became the first black actor to complete the Triple Crown of Acting, winning an Emmy, Oscar and Tony. Rhode Island College, Davis’ alma mater, awarded her an honourary doctorate in 2002.

Song: While the song Rhode Island, It’s for Me is the State Song, the tune Rhode Island is Famous for You garners similar distinction in the state. Written by Howard Dietz and Arthur Schwartz, the track was performed as part of the Inside U.S.A. musical revue, with a collection of songs based of places from across the country.

Band/Musician: George M. Cohan is known as the father of the American musical comedy, thanks to his lengthy career in the entertainment industry. He wrote over 50 shows and 300 songs, including Over There, Give My Regards to Broadway, The Yankee Doodle Boy and You’re a Grand Old Flag. He was also called the man who owned Broadway, prior to World War I.

People: Journalist and TV personality Meredith Vieira was born in Providence. Vieira rose to fame due to her role as the original moderator of The View talk show. Vieira also hosted Who Wants to Be a Millionaire from 2002 to 2013. She left The View to join The Today Show in 2006 and later hosted her own talk show, The Meredith Vieira Show.

Animal: Because I can’t find anything else, this category goes to anthropomorphic dog Brian Griffin, from Family Guy. Although fictional and animated, Brian is one of the show’s most popular characters for merchandising and when he was killed off of the show, the reactions of fans saw him return only two episodes later. I like that he enjoys a good drink.

Invention: As a fan of these eateries, both for their menus and design, I have Rhode Island to thank for the creation of diners. The first one was located in Providence, operated by Walter Scott, whose horse-drawn lunch wagon serviced workers at the Providence Journal. While much has changed since Scott’s 1872 concept, a lot has remained the same, which is why diners are so beloved.

Crime: The most shocking detail about the murders committed in Warwick by Craig Price, was the fact he was 13 and 15 years old for them. His victims were all neighbours, with each stabbed numerous times. Being a minor, Price was due to be released from incarceration at the age of 21, but additional offences committed while in jail have kept him where he belongs.

Law: It should be noted, Rhode Island never ratified the prohibition amendment, turning a blind eye to bootleggers and rumrunners, who capitalized on the state’s location along the Atlantic Ocean. My kind of people!

Sports Team: While Rhode Island has no professional teams, two top level minor league franchises play in the state. The Pawtucket Red Sox are the Triple-A affiliate of the Boston Red Sox, while the Providence Bruins are the American Hockey League partner of the Boston Bruins. Also, America’s Cup yacht races were held in Newport from 1930 to 1983, while the inaugural X Games were hosted in the state.

Athlete: Baseball Hall of Famer Nap Lajoie was born in Woonsocket. His career spanned 20 years, playing for the Philadelphia Phillies, Philadelphia Athletics and Cleveland Naps (the team was named after him). For a handful of seasons with the Naps, Lajoie served as a player-manager. Lajoie still holds the modern day record for highest batting average in a season at .426.

Famous Home: One estate we have yet to cover is Hammersmith Farm, the childhood home of First Lady Jackie Kennedy, in Newport. The mansion and estate served as the reception site for the wedding of Jackie to John F. Kennedy and because of the time the two spent there while JFK was President, the place was referred to as the Summer White House.

Urban Legend: Inspiration for horror movie The Conjuring was the Perron family farmhouse in Harrisville. According to the family, ghosts were originally friendly, but things quickly turned, with spirits becoming more threatening, particularly suspected witch Bathsheba Sherman. The home experienced a number of suicides and tragic deaths prior to the Perron’s purchasing it.

Museum: The International Tennis Hall of Fame is housed in the former Newport Casino. The facility includes a museum, as well as a variety of styles of tennis courts. The Newport Casino is a good choice for the museum’s location, given the city was home to tennis’ first U.S. Open (then called the National Lawn Tennis Championship) in 1881.

Firsts: In December 1790, the first cotton mill in the U.S. began operations in Pawtucket. The water-powered mill was invented by Samuel Slater, earning him the nickname ‘Father of the Industrial Revolution’. Rhode Island was also the first colony to abolish slavery and first state to abolish the death penalty for all crimes (although it was reinstated for a time).

Company: Originally Hassenfeld Brothers, what’s now toy and game business Hasbro was founded in Providence in 1923. Their first toy was Mr. Potato Head and they were early licensees of Disney products. Today, the company is headquartered in Pawtucket, with products including Nerf, Monopoly, G.I. Joe, Star Wars, Transformers, and My Little Pony lines.

Events: The first attack by a New England colony against the British occurred in Newport in 1772. Known as the Gaspée Affair, it involved the burning of British customs ship the HMS Gaspée. The rebellion is celebrated annually with Gaspée Days, including a festival and parade. Later, Rhode Island would be the first colony to declare its independence from England.

Miscellaneous: Rhode Island was founded by Roger Williams, whose views regarding freedom of speech and religion led to him being banished from Plymouth, Massachusetts. Those ideals were later incorporated into the creation of The First Amendment. To honour Williams, many things around the state have been named after him, including a National Memorial, park, zoo and university.

This cocktail was created by bartender Vincenzo Marianella, while working at Los Angeles bar the Providence. Rhode Island Red refers to the State Bird, which is a domestic chicken. The birds are loved so much, there’s a Rhode Island Red Monument in Adamsville. I hope they taste as good as they look!

As we continue to celebrate the gloriousness that is the Sip Advisor (with my recent birthday and all), today we will look at the greatest writers out there in the land of fiction. Write-on my brothers and sisters!

It seemed like a good idea for writer Jack Torrance to take a job as a caretaker, looking after the massive Overlook Hotel estate in the Colorado mountains over the winter off-season… especially when he could use the solitude to get down to work. Only problem is the silence and seclusion turned an already damaged man into a complete psychopath, set on hunting down his own wife and son. Remember, “all work and no play makes Jack a dull boy!” 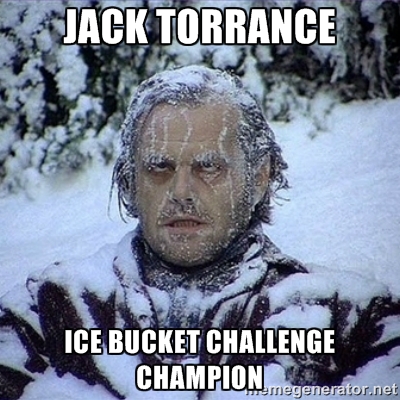 This often pretentious dog considers himself a future legendary scribe, except for the fact that for the longest time, he only talked about writing the great American novel, never sitting down to actually pen it. When he finally does, Faster Than the Speed of Love, is shredded by critics. His follow-up self-help title Wish It, Want It, Do It becomes a best seller, but the fame and fortune for Brian is fleeting, as he lets it all go to his head and alienates those that love him.

I would never expect my work to get me into trouble (unless I give a liquor company a bad review and they boycott serving me!), but that’s exactly what happens to Paul Sheldon, after he decides to end his popular series of romance novels. He just so happens to also be in the custody of his ‘number one fan’ Annie Wilkes, when this conclusion is published and that leads to a whirlwind of pain, instead of being nursed back to health by the former medical professional.

It’s pretty easy to get ideas for your best-selling mystery novels when real-life murders seem to follow you around like you’re death personified. Jessica Fletcher may reside in the sleepy, rural town of Cabot Cove (where there’s an out-of-proportion murder rate), but thanks to her success as an author, she often travels the world and… you guessed it, comes across even more brutality. At least she’s always able to solve the crime, outwitting bumbling police officers everywhere.

Along with being a sidekick and companion, Dr. John Watson also took it upon himself to record the extensive case files of Sherlock Holmes. As a fan of a good mystery, I wonder where we would be without the writings of Dr. Watson (who was originally to be named ‘Ormond Sacker’). Dr. Watson becomes a biographer of sorts for Holmes, largely because he can’t stand others taking and receiving credit for the solving of high-profile crimes.