Each month, the Sip Advisor will alphabetically travel Canada, discovering the best each province has to offer in a variety of subjects. We will also feature a drink the area is known for. Today, we journey to Newfoundland and Labrador, affectionately known as The Rock. The place is called Canada’s Happy Province, so let’s see if that’s true:

Motto: “Seek ye first the kingdom of God” – Do you have a map I can borrow?

Food: What do you get when you throw salted beef, cabbage, potatoes, carrots, and turnips into a bowl and boil the whole collection together? You get the Newfie culinary delight known as Jiggs Dinner. The meal is typically followed by servings of pease pudding or figgy duff for dessert. Another edible tradition from the province is Fries, Dressing and Gravy (aka Newfoundland Fries), which is similar to poutine.

Drink: Newfoundland Screech is a rum distributed by Rock Spirits in St. John’s. The spirit gets its name from the term for any cheap, high alcohol booze, such as moonshine. Screech is famous for the ritual of the “screech-in”, which is performed by Newfoundlanders onto visitors to the island. The mainlander will take a shot of Screech, recite a prepared verse and kiss a codfish or suitable substitution. 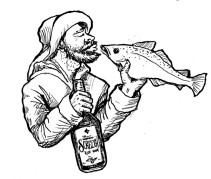 TV Show: Republic of Doyle is a comedy-drama series set in St. John’s. Airing for six seasons and 77 episodes, the show followed the adventures of private investigator Jake Doyle and his family. Stars such as Russell Crowe, Victor Garber and Luis Guzman made guest appearances during the series’ run. The show was nominated for a number of Canadian media awards.

Movie: Come From Away is a film version of the live musical of the same name, which depicts the events following the 9/11 terrorist attacks, when around 7,000 airline passengers were redirected to and stranded for a week in the small town of Gander. The movie was released on Apple TV+ on September 10, 2021, right before the 20th anniversary of 9/11.

Book/Author: The Shipping News by Annie Proulx, is about a New York newspaper reporter, who moves to Newfoundland, where his father’s family had lived, in the hopes of restarting his life. It won the 1994 Pulitzer Prize for Fiction (along with the 1993 National Book Award for Fiction) and was later adapted into a 2001 movie, starring Kevin Spacey, Judi Dench and Julianne Moore.

Actor/Actress: Shannon Tweed was born in Whitbourne. The 1982 Playboy Playmate of the Year had roles in soap operas such as Falcon Crest and Days of Our Lives, along with numerous guest appearances on TV shows, including Fantasy Island, The Dukes of Hazzard, Baywatch and Frasier. Tweed is married the Kiss frontman Gene Simmons and featured prominently on his reality series Family Jewels. 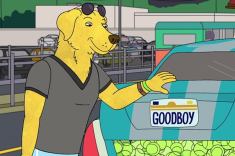 Song: Ode to Newfoundland is Newfoundland and Labrador’s official provincial anthem and was once the area’s official national anthem, until Newfoundland became a Canadian province in 1949. It was composed by Cavendish Boyle in 1902, and sung by Frances Daisy Foster. The song is still sung at public events today, although typically only the first and last verses of the four-verse poem.

Band/Musician: Great Big Sea was formed in St. John’s in 1993. The folk rock band is perhaps best known for their songs When I’m Up (I Can’t Get Down) and Ordinary Day, which both featured on the Canadian RPM charts. The group retired following their 20th anniversary tour, although some of the members have continued on with solo careers and playing Great Big Sea songs.

Animal: A pair of dog breeds, the Newfoundland Dog and Labrador Retriever, come from the province. Both breeds developed from working with fishermen. The most famous Newfoundland Dog was Napoleon the Wonder Dog, a circus performer, while some notable Labrador Retrievers, include Marley (aka “the world’s worst dog”), who was the subject of the book and film Marley & Me, as well as other service and rescue animals.

Invention: The gas mask was invented by St. John’s physician Cluny Macpherson. He was serving during World War I and quickly developed the device, originally called the Hypo Helmet and later the British Smoke Hood, following Germany’s first poison gas attack on April 22, 1915. For his work, Macpherson was named a Companion of the Order of St Michael and St George.

Crime: The murder of one-year-old Zachary Turner in St. John’s, by his mother Shirley Turner, who then committed suicide, stunned the nation and brought forth changes to Newfoundland’s child welfare system and Canada’s bail laws. Shirley killed her son while on bail and awaiting extradition to the U.S. for the murder of Zachary’s father, Andrew Bagby. Zachary’s Bill was later passed, allowing courts to refuse bail for serious crimes, in order to protect accused’s children.

Sports Team: The Newfoundland Growlers of the East Coast Hockey League are the closest thing the province has to a professional franchise. Previously, the St. John’s Maple Leafs and St. John’s IceCaps of the American Hockey League played on The Rock. It should also be noted, the Royal St. John’s Regatta is the oldest annual North American sporting event, existing since 1816.

Athlete: Kaetlyn Osmond, born in Marystown, won a medal of each colour in figure skating, over two Olympics. At the 2014 Sochi games, the Canadian team took a silver medal, improving to a gold medal at the 2018 Pyeongchang games. Also in 2018, Osmond won a bronze medal in individual competition. It should also be noted, Daniel Cleary was the first Newfoundlander to win a Stanley Cup, accomplished in 2008 with the Detroit Red Wings.

Famous Home: Hawthorne Cottage in Brigus, was the home of famous Arctic explorer Captain Robert Bartlett… you know, when he wasn’t out adventuring. Artifacts and memorabilia from Bartlett’s storied voyages are on the display at the home now. Hawthorne Cottage was named a National Historic Site in 1978 and a Federal Heritage Building in 1993.

Urban Legend: Some call this apparition the Ghost of Dobbin’s Garden, while other’s dub it the Hag of Bell Island. Whatever you want to call her, she was featured as part of a 2016 Canada Post stamp series, highlighting spooks and specters from across Canada. The story behind this character is that she was murdered by German soldiers during World War II and now haunts the area, as revenge for not being saved during her attack.

Museum: The Rooms in St. John’s, is part art gallery, part museum and part archives. Opened in 2005, the cultural facility highlights all things Newfoundland and Labrador, with an amazing panoramic view of the city’s downtown and its port. Exhibits examine the province’s relationship with the Atlantic Ocean, military history and animals who call the region home.

Firsts: Newfoundland’s location has allowed it to become part of some very interesting feats in history. The Rock has received the first transatlantic wireless signal in 1901, as well as been the starting point of the first non-stop transatlantic flight (from St. John’s to Clifden, Ireland) in 1919. Additionally, the first New World smallpox vaccine occurred in Trinity in 1798. 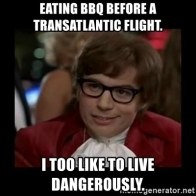 Company: When franchisees tried to open the first Golden Skillet fried chicken restaurant in Canada in 1969, they were forced to change the name due to legal issues. Thus, Mary Brown’s Chicken was born, with the first location being at St. John’s Avalon Mall. The chain has since grown to 200 stores across Canada, continuing to sell the recipes created by Mary Brown Guthrie, wife of the Golden Skillet’s founder.

Events: Following two referendums held in 1948, it was narrowly voted by Newfoundlanders that the colony should enter into confederation with Canada, becoming the 10th and last province. The British North America Act was passed and Newfoundland official joined the country at midnight on March 31, 1949. Newfoundland added Labrador to its profile on December 6, 2001.

Miscellaneous: Some Newfoundland and Labrador eccentricities should be noted. First, the province has its own time zone, Newfoundland Time, which is 30 minutes ahead of Atlantic Time. The province also has its own dictionary, used for pronunciations and definitions of “Newfoundland English”. Finally, Newfie’s participate in Mummering, the act of getting into disguise and visiting friends and family during the Christmas season.

I just had to use a Screech Rum recipe for the Newfoundland and Labrador drink. I mean, it gave me an excuse to add another bottle to my collection! Mrs. Sip and I hope to get to Newfoundland at some point in our travels. I can see us having too much fun on George Street!