There are a lot of rum memes out there and I’ve narrowed it down to the best of the lot. Once again, I do it for all you little sippers… free of charge!

As I’ve written before, I often get an odd look when I’m pouring myself a drink in the early hours of the day. I personally see nothing wrong with a nip in the morning. Call it the breakfast of champions, if you will. At least now I know I’m not alone and I properly belong as an audio-animatronic on Pirates of the Caribbean!

I’ve always felt akin to felines and now I know we share the same feelings on rum and the fear of discovering it’s all gone. Luckily, I always keep a thorough stock of the spirit, usually in a variety of styles and flavours. Relax little kitty, you’re always welcome to come party with the Sip Advisor!

I hate running… but if I saw a group of people running with the thoughts that we were all chasing down some sweet liquor, I’d be right at the head of the group and doing everything I could, Wacky Races style, to finish first. Like this meme, though, the minute I learned everyone was just going for a jog, I’d quietly disappear!

Now this is my kind of exercise. Bringing your glass routinely to your lips is a form of bicep curls and if you’re constantly getting up and down to make a new beverage, that could be looked at as doing squats. Finally, drinking while also not dying can be thought of as breathing exercises, and now you’re getting a full body workout! 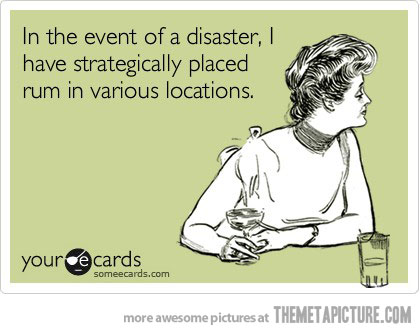 We can learn a lot from our elders, particularly this wise meme lady. I need to do a better job of having contingency liquor. Right now, I have everything in one basic spot and that’s not planning ahead properly. Most importantly, everyone should have one bottle stashed in their bedroom in case they don’t feel like getting out of bed!

Today we drink the daiquiri, one of the world’s most noble cocktails. Join me, won’t you!

Sip Advisor Bar Notes (3 Sips out of 5):
Last month, I included the Wildberry Daiquiri as part of Frozen Cocktail Week, but it’s such a classic cocktail, it had to be done for Rum Week, as well. This version isn’t too bad, but there’s not a whole lot going on and the Light Rum taste isn’t masked as well as most might hope for. I like my drinks to play on the strong side, so that’s okay with me, but other’s might want to hesitate.

Cereal and advertising slogans go hand-in-hand. All of us remember them from our childhood, when breakfast mascots seemed to rule the world. Today, many of these jingles and mascots have gone the way of the dodo, so let’s give them one more chance in the sun. Thanks for the memories!

The officially-licensed breakfast of the NRA. Why not have a bowl, thus justifying the need for firearms in every home.

“Brings out the tiger in you, in you!” – Frosted Flakes

So does hockey, naked women, Texas hold’em poker (because I always lose the allowance Mrs. Sip provides me), go-kart racing, and afternoon naps! Tony the Tiger, I am not, however. 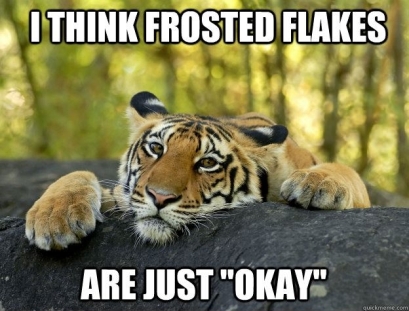 Yeah, actually I can. I never liked Sugar Crisp. It just tasted funny to me. Sugar Bear was pretty cool, though. He seemed like a total junkie, always needing his fix!

Thanks for teaching me how to spell Monsieur Apple Jacks (sounds like it could be a French name, although I guess it would be Apple Jacques)… especially when cereals like Quisp have a catchphrase like “Quisp for Quazy energy.” At least one company isn’t dropping the education ball.

It’s like the cereal is talking to me, man. Seriously, Rice Krispies must be responsible for a number of mental patient and drug-induced freakouts. 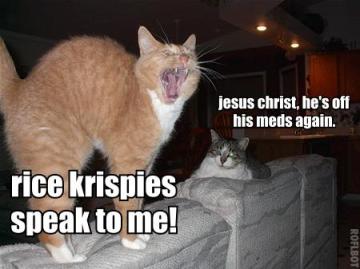 Unfortunately, Toucan Sam isn’t the same tracking bird he once was. A combination of old age and a terrible cocaine addiction have left the poor guy without the ability to sniff out Froot Loops. His nephews (Puey, Susey and Louis – what a rip-off of Huey, Dewey and Louie) have taken over in his absence, but as with most other things, this new generation of cereal hunters just don’t have the drive, passion or respect to live up to Sam’s legacy.

Sonny Cuckoo is a fiend for Cocoa Puffs. He is the high-strung opposite of Sugar Bear’s laidback stoner ways. The kind of bird that commits violent crimes to procure the money he needs for his habit.

Pissing-off Irish and leprechaun-looking people for years, the fine folks at Lucky Charms are now being forced to pay reparations to the Emerald Isle; its angry, drunken citizens; and the United Union of Leprechauns. These are people you really don’t want to mess with.

You know the Trix Rabbit actually got to eat the cereal once. There was a write-in vote cast (one that I paid more attention to than any government election I’ve ever had to suffer through) that saw kids get to choose whether or not the “Silly Rabbit” would finally get his hands on the fruity breakfast. He won the vote, restoring my faith that all kids aren’t dicks and got to eat one bowl of Trix before going back to being a perennial loser.

To a generation of obese kids today(most likely thanks to foods just like Corn Pops), this slogan just means they want another Diet Coke (worse for you than normal Coke, of course). I can’t help but notice Corn Pop’s grammar sucks, too… what do you expect when all kids can do nowadays is text short-form words and barely have the attention span to get through an episode of some Japanimation garbage on their tablet.

“The Breakfast of Champions” – Wheaties

This slogan will remain false until my picture is plastered on the box, as I am a reigning four-time liquor champion of the world. Our sport just isn’t given the respect it deserves.

“I vant to eat your cereal!” – Count Chocula

How in the world is Count Chocula still more of a badass than those losers from Twilight?

“It tastes like a chocolate milkshake, only crunchy!” – Cocoa Krispies

What’s wrong with a crunchy chocolate shake, I ask? Are you saying that I don’t make good milkshakes just because they’re a little crunchy? Well, my milkshake brings all the boys to the yard, so suck it! And how come Snap, Crackle and Pop weren’t African-American for these Cocoa Krispies ads?

It was Alpha-Bits that first stoked the fires for me to become a writer. A very young Sip Advisor used to take his bowl of cereal and write prize-winning blogs for Mama and Papa Sip. I was paid in chocolate chip cookies… that and stock options.

Oh man, this could get dirty. You know what, I’m going to take the high road and let sleeping dogs lie. The Sip Advisor is growing up!

“How do they cram in all that graham?” – Golden Grahams

It’s simple arithmetic: you calculate the square root of the graham, divided by the hypotenuse of the golden and then you know how much you can cram. Don’t need a Nobel Prize in Mathematics to figure that out. 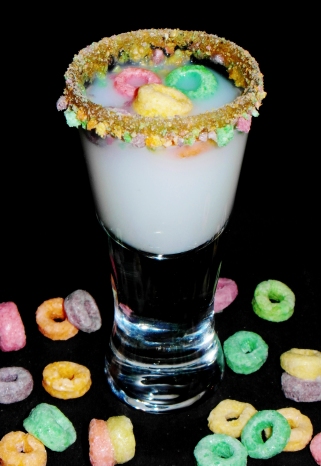 I finally got to try the Loopy (Froot Loops-flavoured) Vodka, thanks to Cousin Sip bringing it around to The Sip Advisor employee retreat. Next year’s team building event will be for everyone to stay home and spend the weekend in their pajamas. I’m the best boss in the world!

Sip Advisor Bar Notes (4 Sips out of 5):
My only regret with this shot is that the Froot Loops, when crushed, lose their wonderful colour and kind of become a normal brownish cereal colour. Still, the whole appearance looks great and the shooter is delicious.