Every time Lays Potato Chips brings out new flavours (often part of ‘Do Us a Flavour’ contests), the Sip Advisor gets excited. Sure, some of the products produced are misses, but there always at least one option that hits the spot.

The Sizzlin’ Szechuan variety is pretty tasty with a sweet and spicy red pepper burn that lingers at the end of each bite. Also part of the line this year is Paprika & Sweet Onion, which Ma Sip has purchased, but I haven’t cracked into just yet.

In the US, 2017 ‘Do Us a Flavour’ options include Crispy Taco, Everything Bagel with Cream Cheese, and Fried Green Tomato, none of which I’ve experienced for myself. Of those, I think the Crispy Taco sounds the most appealing.

As for previous incarnations of the competition, I still like the Chicken & Waffles, Southern Biscuits & Gravy, and Creamy Garlic Caesar releases. Only the last of those three came from the Canadian-based promotion.

Coca-Cola and Pepsi. The two are synonymous with one another, and have waged one of the greatest feuds of all-time. Let’s take a look at some of the tactics used by each company during the infamous Cola Wars, which has been simmering for decades:

Looking to update their traditional recipe and leave Pepsi behind in their dust, Coca-Cola released New Coke. Despite a large marketing campaign, featuring the likes of Bill Cosby, this reboot backfired greatly on the company. Cosby even ended his relationship with Coke, stating that his credibility had suffered after endorsing the relaunch. Little did he know his character would fall to much greater depths years later.

Coca-Cola has often used cute mascots in its advertising. Heck, they are credited with creating the likeness that we now identify Santa Claus as. Their polar bear family has also been quite popular and Pepsi hasn’t crafted their own character, in reply.

Touring North America, the Pepsi Challenge tested consumers tastes over whether they preferred Pepsi or “the other brand”. It certainly increased the awareness of Pepsi and the original Pepsi Challenge is often cited as the impetus for the New Coke debacle.

The Pepsi Points initiative allowed drinkers to collect points from the products and redeem them for prizes. In response, Coca-Cola launched the Coke Rewards program. One funny story involved a Pepsi Points collector suing the company when he attempted to redeem the jet plane (with an advertised price of seven million Pepsi Points) featured in one of the commercials for the campaign.

On one side of the battlefield, you have General Coke, Sergeant Sprite, Brigadier Barq’s, Major Minute Maid, Private Powerade, and other enforcements. Their counterparts, of course, include Pepsi, 7-Up, Mug, Tropicana, Gatorade, and the rest. And that’s without even delving into their snack food businesses and other tentacles of the conglomerates. For every addition to one company’s line, there is a counterpoint from the opposition.

One of the biggest pissing contests between the two companies can be seen in who they pay to endorse their products. While Coke seems to be the athlete’s choice, with LeBron James and Wayne Gretzky coming onboard, Pepsi has reeled in top music acts, such as Michael Jackson, Britney Spears, Kanye West, and Beyonce.

You’d think each company’s slogans wouldn’t matter too much, but they are loaded statements. For example, for Coke to call itself, “The Real Thing”, they’re pretty much saying that Pepsi is a copycat or fraud. On the other hand, Pepsi has gone so far as to use the catchphrase “The Best Drink Created Worldwide”… there’s no ambiguity with that.

The war rages on to this day, with both companies battling for big-time sponsorship deals and getting into various venues as the exclusive beverage provider. I will admit that I’ve always been a Pepsi fan and find Coca-Cola to only be a tolerable substitution when there’s no other option to be had.

Sip Advisor Bar Notes (4 Sips out of 5):
Also known as Calimocho, this drink – simple as it is – has become a hit within Spanish culture, so I had to give it a shot. Other recipes for the cocktail include a splash of Lemon Juice, but I didn’t have any on hand. The drink is actually quite tasty, reminding me of a Sangria-like beverage. Mrs. Sip, a member of the anti-pop lobby, even tried a quick sip and liked it. The Watermelon garnish was the result of that being the only fruit I had in the fridge.

Vancouver Island Brewing seems to be going through a bit of a rebranding, featuring a few old favourites with new names. Of those included in the new campaign is this product, which I picked up a six-pack of recently.

The Carmanah Ale is of the amber ale variety, featuring flavours of pine “as deep as a forest of Sitka spruces”. The 4.8% ABV easy drinking beverage was perfect for a long day of sipping, including drinking games, providing longevity and durability.

Joining the Carmanah Ale (aka Sea Dog Amber Ale) with new packaging is the Piper’s Pale Ale and 48 Dark Lager (formerly Hermann’s Dark Lager). The movement is using geographic coordinates, along with the tagline: “Where’s Next?”

While dressing is not a snack in a traditional sense, when it’s used on a variety of snack items, it can become an extension of that amazing family. Such is the case with this delicious product from Hidden Valley Ranch.

On a recent trip to shop in the US, the Honey BBQ Ranch dressing caught my eye and I have since returned to grab another bottle. The sauce is a beautiful blend of sweet from the honey, spice from the BBQ and tang from the ranch.

The Sip Advisor is a sauce junkie (our fridge is filled with flavours) and therefore, this product will be a permanent staple of my south-of-the-border shopping lists. I suppose there are worse things to be addicted to.

To celebrate Cousin Sip’s birthday, the Sip Family made our way to the Fort Langley area, for a meal at Trading Post Brewing’s Taphouse & Eatery. There, I was able to reacquaint myself with this beer, which I hadn’t tried since the brewery opened.

The Three Bears Breakfast Stout had a very heavy espresso flavour, which was a little much for the Sip Advisor, given I don’t drink coffee and even abhor the beverage and the culture that has grown around it. That said, I still enjoyed the 6.7%, 40 IBUs drink. 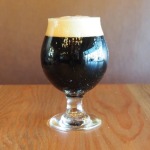 Trading Post has named many of their beers based on the stories of early BC settlers. This beverage gets its moniker from Hudson’s Bay Company chief factor Gavin Hamilton’s tale of encountering three bears and only needing two bullets to save himself.

Prior to this birthday gathering, I didn’t know that Trading Post had a Taphouse & Eatery, having only visited their tasting room before. The eatery had some great food dishes on their menu. I went with the Pulled Pork Poutine, which really hit the spot.

Much like for Christmas, the Sip Advisor was looking for the perfect beer to profile on New Year’s Eve. While that didn’t come as easy as its predecessor holiday, I did come across this product, courtesy of Longwood Brewing.

The Big One IPA is constructed using hops and malted barley grown locally. At 6.5% and 65 IBUs, this beverage is sure to measure on your Richter scale and is available in 568ml extra-tall cans at private liquor stores around the province.

Sure, the beer was designed as a reference to the massive earthquake predicted to hit this part of the world sometime in the future, but I thought it was an ideal selection for the end of this BC Beer Baron project. This is the ‘big one’!

The Nanaimo-based brewery is also home to a brew pub, which I would love to visit on a future trip to Vancouver Island. The location has become “one of Nanaimo’s premier destinations” and that’s good enough for me.

Each month, as part of this 366-day BC craft beer extravaganza that I will be sharing with you throughout 2016, I will highlight a specific style or theme of beers for a whole week of articles. Already the best time of the year, the fact it’s Winter Ale season makes it that much better.

Just like the character of the Grinch experienced his heart growing three sizes thanks to the Whovillians, perhaps the same happened with Bridge Brewing, given their bevvy of seasonal releases for Christmas. Of course, that’s not to say the folks at the brewery were bad to begin with…

The Grinch Winter Ale is a limited edition beer, providing the elements one would expect in a winter warmer, such as flavours of caramel, plum pudding and spices. Bridge has created a great Seussian poem for the 6.5% ABV, 26 IBUs beverage that really should be read before enjoying the brew.

There is also a barrel-aged version of The Grinch, which I have yet to try. This variation features the recipe being aged in bourbon and Sherry Wood Single Malt Whiskey barrels. Apricots also used by Sons of Vancouver in their amaretto have also been added to the mix.

As far as Christmas-themed beers go, Bridge also has the Sleigh Booster Imperial Red Ale, which comes with stats of 9% ABV and 71 IBUs. Mrs. Sip gave me both The Grinch and the Sleigh Booster in a self-made beer advent calendar last year and it resulted in a wonderful Christmas!