Yesterday we looked at some wonderful TV shows that were never given a fair chance to find an audience. Today, we discuss shows that were given more lives than they were ever entitled to and probably should have never seen the light of day. Enjoy!

Apparently only “reality-based” shows with sexy people worked in the late 1990’s. This show starred Jenny McCarthy as a convenience store clerk who inherits a large fortune from the father she never knew, moves into his Hollywood mansion and pursues a career as a screen star. If only it was that easy for all us store clerks. Only 10 of the 17 episodes produced ever aired and you have to assume that there’s some serious TV gold on those last episodes. Spoiler alert: viewers would eventually find out that Jenny’s father wasn’t dead, only missing.

Pamela Anderson as a breasty bookstore employee (as close to a librarian as you can get) seems like it should have pulled in the young male demographic, at the very least… providing they’ve received the proper hepatitis vaccinations. Christopher Lloyd was even a cast member. Maybe if the show had been about time travel and ol’ Doc Brown had travelled to 2005 to check out blonde bimbos, the program might have caught on.

Because who doesn’t like to see a family fighting crime together. Sadly Julie Benz left her role on Dexter to be part of this series, which lasted a mere 20 episodes. The super powers they doled out were a little ridiculous in this show. Dad gets super strength, mom gets super speed, daughter gets telepathy and son gets… intelligence!? That’s it? Seriously? And here I thought getting stuck with telepathy sucked.

How many times must we see that wheel spin and some moron guess a letter of the alphabet? Vanna White gets paid to do something any computer could do electronically nowadays. Used to be she was actually turning letters over. Now she just touches them. Seems like a job even I could do, with my fourth grade level of reading. I’d like to waste some of my winnings and buy a vowel, Pat… that cool with you? At least it provided us with this classic South Park moment [below]…

I can just see how this pitch went to the studio: Producer – Okay, we want to take a chef, with no acting skills whatsoever and only a small following based on his catchphrase (BAM!) and give him his own half-hour comedy. Network Executive – “Fantastic idea, but I have one little tweak, let’s pay him tons of money for 11 episodes of work”. This series was such a disaster that it doesn’t even have a Wikipedia entry. I have to admit though, I did like Emeril as Marlon the Gator from Disney’s The Princess and the Frog! 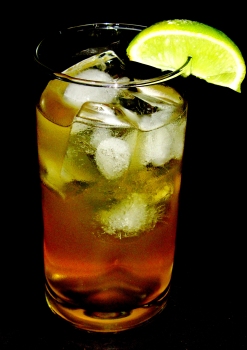 In doing some research for this post I saw that one person’s list of shows that should have been cancelled quickly included Buffy the Vampire Slayer and its spinoff Angel. Had to chuckle as these are two of Mrs. Sips favourite all-time programs. (See, hon, I’m not the only one who thinks this!)

Sip Advisor Bar Notes (5 Sips out of 5):
What a fantastic drink! I went out on a limb and used my Apple-Lime Juice as the mixer and what a fantastic choice it was. This is an obvious 5-star drink and I urge all of Sip Nation to put together the ingredients needed to pull this off on your own. You will not be disappointed.