While on a recent craft beer crawl in the Brewery Creek neighbourhood, we stopped into R&B Brewing’s new Ale and Pizza House – a debut visit for the Sip Advisor. There, along with some fantastic pizzas, I ordered a flights of beers, which included this very unique selection.

The Kettle Sour Export Stout is something I have never seen on a brewery’s menu before. I liked the mix of roasted stout flavour combined with a tart finish. At 7% ABV and 50 IBUs, the beer is definitely strong and complex. With each sip, you’ll notice different elements and those components even evolve as the drink changes temperature. 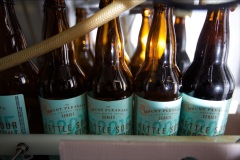 Originally released at the beginning of 2016, the Kettle Sour Stout is part of the brewery’s Mount Pleasant Series. Suggested food pairings include desserts, such as Black Forest Cake and sea-salted or bitter chocolates. When launched, the beer was available in bomber-sized bottles, but I didn’t see any at R&B during this stopover.

The Sip Advisor was thrilled to see the Ale and Pizza House finally open. In February, Mrs. Sip and I were allowed to peek inside, as they were doing “final touches”. Then, the planned soft opening on St. Patrick’s Day came and went and the delays kept coming, due to BC Liquor Board holdups. Congrats to R&B!