A Movie of Their Own

With the Minions (more on them later) getting their own movie, out in theatres this weekend, the Sip Advisor thought it would be a good time to look at other characters that proved so popular that they earned their own film(s). Kind of like how Mrs. Sip keeps trying to break away from me and launch her own brand… too bad for her, she’s under contract for years to come!

After a brief appearance in The Mummy Returns (in one of the worst CGI effects of all-time), wrestling star The Rock launched his Hollywood career with his own film, as the titular Scorpion King. While it wasn’t going to garner any Oscar consideration, the action in this movie was great and the story pretty good, too. Three additional movies have joined the franchise, although The Rock vacated the role. 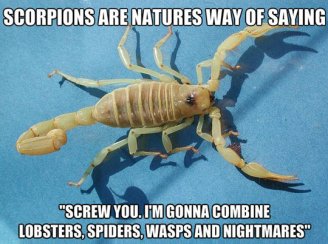 It’s funny that the ultraviolent Machete first appeared in the children’s movie franchise Spy Kids, before branching out on his own vigilante activities. Played to badass perfection by Danny Trejo (a former prison inmate before turning to acting), the Machete character has enjoyed two film installments to date, featuring massive deadly weapons, beautiful women, and a lot of creative kills.

This suave little kitty stole out hearts, starting with Shrek 2, en route to his own movie and Netflix TV series. Puss in Boots may have existed since 1697, but he has never been more popular than when he sliced and purred his way through various enemies in the DreamWorks films. Voiced by Antonio Banderas, Puss is based on the classic character Zorro, another role tackled by Banderas. 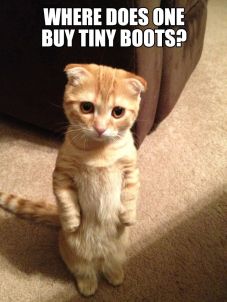 This bumbling detective character is a favourite of the Sip Family, as is star Peter Sellers. Just a side character in the first film of the franchise, The Pink Panther, Sellers stole the show away from lead David Niven and never looked back. As Clouseau, a number of additional movies were made under the Pink Panther banner, up until Sellers died in 1980, at the age of only 54.

I love these little yellow guys, despite the fact I can’t understand most of what they say. The trailer for this movie is pure gold, with the Minions switching from one evildoer to another, after accidentally killing their masters throughout the ages, including an Egyptian pharaoh, Dracula, Napoleon, and others.  I can’t wait to check out the movie and I know I’m not alone in that desire!

Honourable mentions include Jay and Silent Bob, the Penguins of Madagascar, and Aldous Snow (Get Him to the Greek). I wasn’t sure how to handle comic characters, such as Wolverine and Elektra, as they are their own entities, so I’ll leave them in this section. Hate if you want, but let’s all just relax and have a drink!

Power to the People

Vigilantes fascinate me to a degree. People who are willing to take justice into their own hands and set the wrongs of the legal system right, taking up a cause and fighting for the people who have no voice. This list will not include super heroes who have special powers, but just ordinary folks, trying to make a difference:

While the Teenage Mutant Ninja Turtles are vigilantes in their own right, it’s Casey Jones who goes out night after night with no special powers to protect him and takes care of business with an array of sports-themed weapons, highlighted by his protective mask and hockey stick armament. Jones is best remembered for his appearance in the original TMNT movie, where Michelangelo calls his “Wayne Gretzky on steroids!” and he joins the team and helps take down Shredder and the Foot Clan. 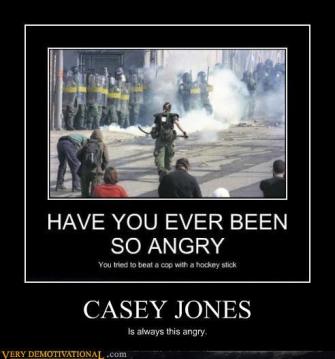 The serial killer of serial killers, Dexter is there to pick up the scraps whenever the justice system fails. Operating under a code passed down to him by his father, police officer Harry Morgan, Dexter stalks his prey and once he has confirmed that they are indeed guilty as charged, he puts them in his kill room and under the knife… quite literally. It’s funny how much you can like someone that would normally be so reviled. Does the end justify his means? After all, Dexter is still a murderer.

The former Mexican Federale (played by real-life ex-inmate Danny Trejo) is one badass you don’t want to mess with. Still, some idiot – drug kingpin Rogelio Torrez – decided to murder Machete’s wife and daughter, which sends Machete over the edge and seeking revenge. Machete’s kill count soars to astronomical numbers and the bloodshed is immense while his vengeance is being sought. Amusingly, Trejo’s own mother has likened calling her son by his killer character’s name. 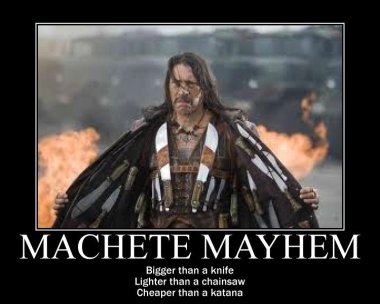 Before becoming a “superhero,” Dave Lizewski had hoped to make a difference in his crime-ridden city. He gets beat up pretty bad on his first attempt, but this results in severe nerve damage and numerous metal plates being surgically implanted in his body, thus making him somewhat impervious to pain. Along with fellow do-gooders like Hit-Girl, Colonel Stars and Stripes, Night Bitch, and Battle Guy, Kick-Ass takes to the streets to dole out some vigilante justice and keep would-be criminals in check.

After his family is killed by members of organized crime, Frank Castle has nothing left to lose and becomes The Punisher, a vigilante who is hell bent on extracting revenge for his fallen kin and ridding the world of evildoers. The Punisher has become more of an anti-hero thanks to his willingness to take on all contracts and for the ruthless nature in which he operates. The man gets the job done, though, unwilling to let anyone get in the way of his end goal: total villain annihilation.

Honourable mentions go to the A-Team, the Boondock Saints, and Batman, who narrowly misses this list because of his immense wealth, unlike other less fortunate crime fighters. Now, I will surely have Batman haunting me and stalking the Sip Advisor like some easy-to-catch prey!

Sip Advisor Bar Notes (4 Sips out of 5):
There are other Punisher/Vigilante recipes out there that I considered, but I felt this one best represented the character. I was missing both Mudslide Mix and Whip Cream (which you’re supposed to garnish the drink with), but mixed my own Mudslide ingredients (Irish Creme, Kahlua, Vodka, Milk) and went with some Chocolate Sprinkles for presentation points. The best part of this shooter is that it couldn’t be further from a punishment and is actually quite delightful!

In honour of all the dudes out there that are growing mustaches that make their partners less attracted to them, all in the name of raising awareness for men’s health, particularly prostate and testicular cancer, here’s a look at some of the greatest whiskers in the media world!

Magnum PI – Tom Selleck is so associated with his trademark facial hair that the network wouldn’t allow him to get rid of it for his role on Blue Bloods. Can you believe Selleck turned down the role of Mitch Buchannon (later went to David Hasselhoff) on Baywatch because he didn’t want to be a sex symbol… uh, hey Tom, too late, buddy! 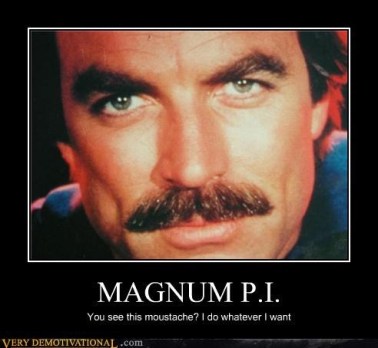 Hulk Hogan – Hogan’s Fu-Manchu plays a vital role in his image as a do-gooder and leader of Hulkamaniacs everywhere. So much so, that when he finally became a bad guy and leader of the reprehensible New World Order, a dirty black beard was added to show he had fully embraced the dark side.

Ned Flanders – Everyone’s favoruite religious zealot has had many storylines center around his nose neighbour. Usually when Ned is forced to shave the facial hair, good things come his way. Surprisingly, when he refused to rid his upper lip of fur, the omnibenevolent one was labeled and rebel and troublemaker.

Yosemite Sam – Sam has such a wicked moustache that it actually encompasses his entire face, including around his eyes. Sam is a mentor of mine, as just like him, I am prone to obscenity-laced tirades when I’ve been outsmarted by a no-good varmint. 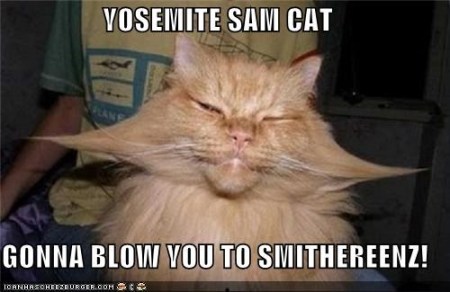 Captain Hook – Whether the cartoon character or the live action depiction by Dustin Hoffman, Captain Hook’s trademark cookie-duster is comical and to be feared all at the same time. If you were in his position, wouldn’t you also grow a mustache and do anything else to distract from the hooked hand!?

Snidely Whiplash/Boris Badenov/Dick Dastardly – It seems that back in the day, you couldn’t be an animated villain without sporting some sort of soup strainer. These are some of the most despicable dudes to ever exist and they evilness was only accentuated by their lower brow.

Ron Swanson – The man’s man of the Parks and Rec crew just wouldn’t carry the same respect if he was sans mustache. He is such an aficionado that he’s gone on to teach others how to grow a great mustache and NBC even has t-shirts with Swanson’s likeness available in their shop.

Mario, Luigi, Wario & Wailuigi – These four guys have a yearly competition to see who has the best lady tickler. My vote goes to Wario and his lightning bolt-esque flavour saver!

Machete – What would an anarchist assassin be without a badass ‘stache!? For Machete, the facial fur is all part of the look meant to strike fear in the hearts of those he is paid to dispose of.

Cleveland Brown – In flashbacks, it’s revealed that Cleveland has had a rockin’ ‘stache since his teenage years and when his son shaves it off in an act of revenge, we learn why. Apparently Brown’s voice is created thanks to the hairs and without the mustache, it sounds squeaky and pathetic. 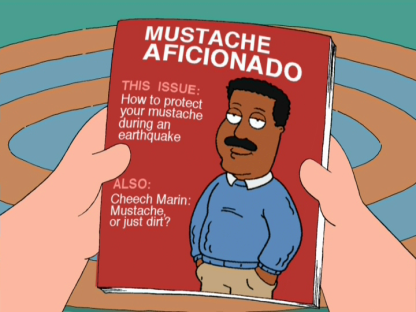 Inspector Clouseau – Clouseau’s mustache was based off of fellow fictional investigator Hercule Poirot, but I’ll take the funny man over the more serious detective any day… providing it’s the Peter Sellers version and not the Steve Martin one.

Borat – I just can’t imagine Borat without his goofy lip foliage. The Kazakhstan journalist has been an inspiration to me and millions around the world, showing us all what lengths we should go to in order to get a story done.

Ron Burgundy – What would a 1970’s newsman be without an epic crumb catcher? In fact, some posters for the upcoming Anchorman sequel prominently focus on the icon’s mustache and that’s all you really need to know before going into the theatre! 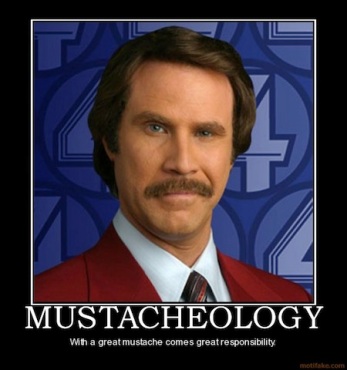 J. Jonah Jameson – The Spiderman hater sports a push broom similar to one Adolf Hitler… could there be a connection there? I’m sure Spiderman and all his employees would think so.

Evil Abed/Evil Cartman/Evil Spock – For some reason, a character can be turned “evil” simply by adding facial hair to their usual look. I’ve experimented with this theory every Movember, by becoming a complete and total dick throughout the month! 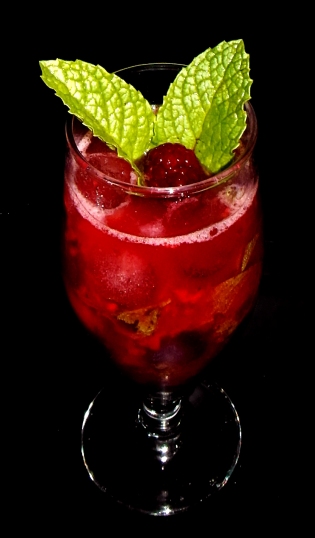 Who possesses your favourite upper lip caterpillar? Unfortunately, this is one area where you won’t all be shouting my name. I just can’t seem to grow great facial hair. Good, yes… but great… not for the Sip Advisor.

Sip Advisor Bar Notes (3 Sips out of 5):
There’s a lot going on in this cocktail and I think that detracts from the overall enjoyment on the drink. When you get a focused sip of the Chambord, for example, it’s very good. On other sips, however, you get a mix of different juices and so on and it’s hard to pinpoint a taste. I’m not a fan of weird, combined, unidentifiable flavours, so it’s too bad that happens in this recipe. I tried to make the mint leaves look like a moustache… mission accomplished!