This weekend, the Sip Alliance made our way to Yeast Van Brewery District for the 2nd annual East Van Brewery Open House. The event ran from 1-5pm, featuring 14 breweries. Although we got off to a late start, we managed to hit a handful of places and had a fantastic time in doing so.

Our journey began at Coal Harbour Brewing, which I’ve never been inside, as they don’t traditionally operate a tasting room. While they are in the process of changing that, it was great they opened the doors to the public and joined the rest of the neighbourhood for this event. While at Coal Harbour, I enjoyed free samples of their Rye Pale Ale, Mango Saison Cask and Smoke & Mirrors Imperial Smoked Ale, which is a favourite of the Sip Advisor. Drinkers could also pay $5 for a glass etched with Coal Harbour’s logo and a pour of beer. 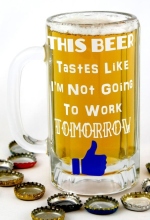 Moving on, we travelled to Andina Brewing. This was another inaugural visit for me, as the company is one of the newest additions to the landscape. Hard to miss given it’s bright yellow exterior, we’d like to return and enjoy some South American food in their tasting room. On this stop, we tried their Session Ale, which was available in 12-ounce pours for $3.

Next up was Bomber Brewing, which came with a brief lineup, as they have a very limited capacity. The wait was worth it, though, as I was able to enjoy a pint of their Super Pest Double IPA with Pomegranate (7.5% ABV, 80 IBUs). They were also selling Girl Guide Cookies, so you can bet we snagged a box and feasted on the treats.

After finishing our drinks, we crossed the street to check out Off the Rail Brewing. There, you could buy drink tickets, good for either the SMASH Pale Ale or Raj Mahal India Ale. Mrs. Sip also purchased one of the cheese twists that are popular icons of BC craft breweries and pair ever so nicely with beer.

Our final brewery stop was Luppolo Brewing, yet another first time seating for yours truly. We split a flight of their wares, comprised of the Agreste Wild Farmhouse Ale (which has recently become the company’s first bottled release), Belgian Blonde, Pale Ale and West Coast Farmhouse. Each variety brought something else to the game and was enjoyable to drink.

To sum up, we particularly liked the places that opened up their brewing spaces to accommodate more visitors. I know serving laws likely hindered some locales, but we weren’t willing to wait outside any operation that had a long lineup. This included some of our favourite places within the industry. While it was busy, we liked seeing so many people out and enjoying the neighbourhood. Of particular note, was how many babies were out with their parents, something Mrs. Sip and I will likely be doing when the 3rd annual Open House occurs in 2018.