Home for a Rest

While many don’t know the song “Home for a Rest” by Spirit of the West, it’s a Canadian classic. And after a year away from Canada, travelling the virtual world, I have FINALLY returned home. The journey has me feeling a little weary, as like the song states: “I’ve been gone for a month (a year in the Sip Advisor’s case), I’ve been drunk since I left!”

I’m far from complaining however, as it’s been a wonderful year abroad. In the last 12 months, we’ve visited 52 countries, featuring seven rums, six vodkas, five whiskeys, two beers, six wines, nine liqueurs, and a whopping 15 spirits. Hell, we even tried two different types of gin! Along the way, we’ve learned about historical figures, sports and athletes, artists and the arts, products and inventions, tourist attractions, foods, and events. Milestones have been passed, including our 100,000th site view and 500th cocktail and 100th shot recipes!

“These so-called vacations will soon be my death,” but the fun can’t stop yet. We have so much more to discover together. Here’s what to expect over the course of the next year:

The big project of 2015 will highlight 52 different flavours, never once repeating a taste as the main ingredient in a cocktail. For example, when I use my Evan Williams Elegant Crisp Gin (apple flavoured), I can’t later use apple rums, vodkas, liqueurs, mixers, or anything else as a featured element. By the end, the Sip Advisor will be like the Baskin Robins of booze… Viva la revolution!!!

Thursday – Out and About/This Week in Liquor

Each week, we’ll delve into the latest news from the booze world. Just in time for your weekend trip to the liquor store! In these articles, we will include a feature titled: Out and About with the Sip Advisor. Here, I will be able to detail what I’ve personally experienced in the week that was. That may include visiting new craft breweries, tasting new spirits, attending cocktail events, etc.

The triple-S-D will enter its third year of existence and will continue to feature the best in Top 5 lists on whatever subject I feel like covering. Suggestions are always welcomed, but otherwise, expect a lot of coverage on the fictional world… where we all prefer to reside!

It wouldn’t be a true New Year’s celebration without some drinks. Since I’m back in my own backyard, I figured we could enjoy some Newfoundland Screech Rum and conquer a rite of passage for my friends from the east! 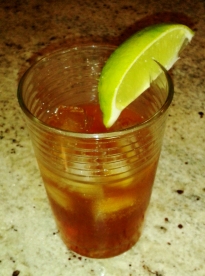 Thank you one and all for your support over the last two years. Please continue to follow the Sip Advisor adventures and enjoy all we have to offer you in 2015. Happy New Year!

Sip Advisor Bar Notes (4 Sips out of 5):
A friend was hosting a party where we were all invited to sample Screech, an Eastern Canadian rum and get “Screeched In,” so I figured, what better way to wrap up the Around the World tour than to finish right where it started! The Screech was nice, paired with the very tasty Elderflower Liqueur. I certainly liked the drink and it seemed everyone at the party who I made it for enjoyed it, as well.