Each week, the Sip Advisor will alphabetically travel the United States, discovering the best each state has to offer in a variety of subjects. I’ve been forewarned, don’t mess with Texas and today we explore the Lone Star State. Let’s see if, in fact, everything is bigger in Texas:

Motto: “Friendship” – Short and sweet… so much for everything being bigger!

Drink: A favourite mixer of the Sip Advisor, Dr Pepper was invented in Waco in 1885 by pharmacist Charles Alderton. The drink gained national attention when it was exhibited at the 1904 St. Louis World’s Fair. The recipe for the soda is kept top secret, split in half and stored in two safety deposit boxes across two Dallas banks. Waco is home to the Dr Pepper Museum, inside a former bottling plant. 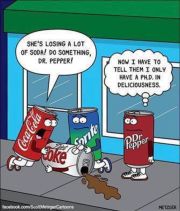 Site to See: Space Center Houston is among the top tourist attractions in Texas. Visitors can learn about the history and future of the NASA space program, through replicas of a space shuttle and space station, among other exhibits. The adjacent Johnson Space Center and Mission Control can also be toured, making for quite a day of space exploration inside earth’s atmosphere.

Street: Sixth Street in Austin is a historic district of the capital city. Formerly named Pecan Street, the Pecan Street Festival occurs every spring and fall, highlighting local food, art and music. The route is affectionately referred to as Dirty Sixth, thanks to its many entertainment options, including music and film festivals, as well as biker rallies.

Movie: Office Space (also from Mike Judge), starring Ron Livingston and Jennifer Aniston, is a fantastic movie and all the more enjoyable if you’ve ever worked in an office. The cult film sees programmer Peter Gibbons grow tired of his mundane job and life, pushing him into an embezzlement scheme against his employer. The movie made red staplers a must-have supply.

Book/Author: The Lonesome Dove series by Larry McMurtry consists of four western novels about a group of Texas Rangers during the formative years of the Republic of Texas. The books have been adapted into five TV miniseries and two TV series. Also, children’s novel Old Yeller by Fred Gipson is set in the fictional town of Salt Licks. It was adapted into a live-action Disney film.

Fictional Character: While I’d like to give this category to Sheldon Cooper from The Big Bang Theory, I have to go with a character that will scare the hell out of most, Leatherface from The Texas Chainsaw Massacre franchise. Face hidden by a mask made of the stitched together skin of his victims and wielding a constantly-revving chainsaw, is there a more intimidating horror baddie?

Fictional City: Once again, we go to Mike Judge’s two cartoon comedies, King of the Hill and Beavis and Butt-Head, which are set in Arlen and Highland, respectively. Arlen is based on a combination of Dallas-Fort Worth towns, such as Garland, Arlington and Allen. Highland is thought to be located near the Texas-New Mexico border. Perhaps we’ll learn more in the upcoming series revival.

Actor/Actress: So many Hollywood A-listers are from Texas, making this a tough category to narrow down. These stars include Jamie Foxx, Woody Harrelson, Matthew McConaughey, Tommy Lee Jones, Owen Wilson, Renée Zellweger, Jennifer Garner, Jim Parsons, Patrick Swayze, and Steve Martin. Many of them have worked with one another over their careers. 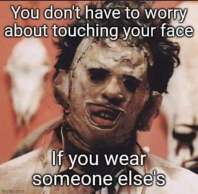 Song: Deep in the Heart of Texas was written by June Hershey and Don Swander has become an anthem for the state. When it was originally released, five recordings by different artists appeared on the Billboard charts. It was also the title song of the 1942 movie of the same name. The tune’s most memorable version may be by Gene Autry (the Singing Cowboy), who was a Texan.

People: Eccentric businessman Howard Hughes was born in Humble. Hughes dabbled in many industries, including aviation, Hollywood films, engineering and Las Vegas hotels and casinos. He was also known for his obsessive-compulsive disorder, which led to him being reclusive in his later years. Hughes’ life was documented in the 2004 movie The Aviator, starring Leonardo DiCaprio.

Animal: Bevo the Texas Longhorn steer is the University of Texas at Austin live mascot. The team has had a steer as mascot since 1916 and is currently on the fifteenth version of Bevo. The steer’s head and horns has provided the school with a hand symbol and chant, known as Hook’em Horns. Bevo has been called “the toughest-looking animal mascot in sports”.

Invention: The temptation to select Silicone Breast Implants for this category is quite… titillating, but I will go with the Microchip, which has evolved to allow folks to have personal computers, smartphones and other devices. This was possible thanks to Texas Instruments electrical engineer Jack Kilby inventing the integrated circuit in 1958. In 2000, Kilby was awarded the Nobel Prize in Physics.

Crime: Among a long list of candidates, the assassination of John F. Kennedy was one of those moments where people remember where they were when they heard the news. On November 22, 1963, Kennedy was shot in the head as his motorcade went through Dallas’ Dealey Plaza. His killer, Lee Harvey Oswald, was also murdered two days later by Jack Ruby. Conspiracy theories persist to this day on the subject.

Law: In Texas, it’s illegal to graffiti another person’s cow… but with your own, go nuts! Sticking with cattle, if you steal any, it’s a hangable offense.

Sports Team: Texas is well-represented across the state, in each of the Big 4 sports leagues. Dallas is home to the Cowboys (NFL), Mavericks (NBA), Stars (NHL) and Texas Rangers (MLB), while Houston has the Texans (NFL), Rockets (NBA) and Astros (MLB). There’s also the San Antonio Spurs (NBA) to round things out. Texas is football mad, so college and even high school programs are well attended. 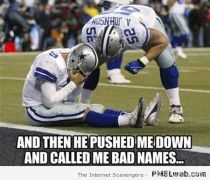 Athlete: Texas seems to be a hotbed for professional wrestlers, including international superstars The Undertaker, ‘Stone Cold’ Steve Austin, Shawn Michaels, Jake ‘The Snake’ Roberts, and Booker T, as well as horde of famous grappling families such as the Guerreros, Von Erichs, Rhodes’ and Funks. Texas-based World Class Championship Wrestling was a major promotion, peaking in the mid 1980’s.

Famous Home: Woodland, in Huntsville, was home to Sam Houston, a key figure in the Texas Revolution and first president of the Republic of Texas. The one-room log cabin can be found on the grounds of Sam Houston State University, with free tours available. The city of Houston (once the capital), the largest city in the state, is named after him.

Urban Legend: Given its proximity and history with Mexico, much of Latin culture is intertwined in Texas, including its legends. These include La Llorona (The Weeping Woman), El Muerto (Headless Horseman) and Chupacabra (Goat-Sucker). There’s also the mystery of what happened to Debbie from Debbie Does Dallas, but that’s a story for another day.

Museum: The Texas Ranger Hall of Fame and Museum is located in Waco. The Texas Rangers, the oldest law enforcement agency in North America, has been involved in thwarting assassination attempts and pursuing notorious outlaws, such as Bonnie and Clyde. Honourary Texas Rangers include John Wayne, Will Rogers, Chuck Norris and George H.W. Bush.

Firsts: A number of things that can now be found around the world, originated in Texas. This includes the first drive-in restaurant Kirby’s Pig Stand, serving up sandwiches and sides starting in 1921; shopping center (a group of stores with shared parking lot) Highland Park Village, established in 1930; and domed stadium the Astrodome, opened in 1965.

Company: Entertainment is important to Texans, with companies such as Dave & Buster’s, Chuck E. Cheese and Six Flags all headquartered in the state. While not affiliated, Dave & Buster’s and Chuck E. Cheese share many similarities, while being geared toward adult and child audiences, respectively. Six Flags was named for the six national flags that have flown over Texas.

Events: The Texas Revolution (October 1835-April 1836) against Mexico, led to the infamous Battle of the Alamo, where legendary figures such as Davy Crockett and Jim Bowie perished in an outnumbered fight. Although a tactical loss, the event inspired many to take up arms for Texas independence. Today, the Alamo is a top tourist attraction in Texas and the country.

Miscellaneous: In 2005, the small town of Clark (population 201, as of the 2010 census) agreed to change its name to DISH, in honour of satellite TV provider Dish Network. Part of the deal saw every home receive 10 years of free basic TV service and a digital video recorder (DVR) from Dish Network. That’s an arrangement the Sip Advisor can get down with. 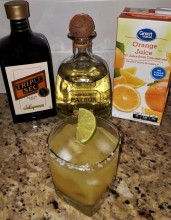 The addition of Orange Juice is what turns a Margarita into a Texas Margarita. You could do this Margarita in a frozen blend, to salute the Frozen Margarita Machine being invented in Dallas in 1971 by Mariano Martinez. That early machine now sits in the Smithsonian National Museum of American History.