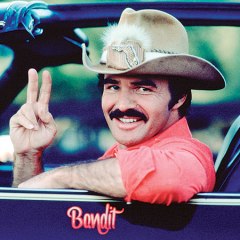 The mustachioed legend has been linked to a number of women throughout his life and can you blame them… the moustache rides alone would keep them coming back for more. Speaking of that ‘stache, there aren’t many guys out there whose push broom could rival his. I’m partial to the Magnum P.I. look, but Burt is a close second in my books.

Looking over his massive list of credits over the years, it’s interesting to note that Reynolds has had some of the greatest character names ever. In an episode of The Twilight Zone, he was Rocky Rhodes. Of course there’s one of his best known roles, The Bandit, in the Smokey and the Bandit franchise. And let’s not forget ‘Man Walking in front of Brewster and Lilah’ in the Kenny Rogers movie Six Pack.

Today we honour Mr. Reynolds, who has been suffering poor health as of late, and we wish him a very happy 77th birthday!

While enjoying this shot, you must hold a finger under your nose to represent a moustache of your own… unless you have a legit caterpillar. That’s the rule. I don’t make them, but this is a rare directive that I’m happy to follow!

Sip Advisor Bar Notes (3.5 Sips out of 5):
I thought it would be funny to garnish the shot with a mustache, but I’m not sure anymore whether that was a good idea. Perhaps if I had used a fuzzy mustache instead of a paper one, that would have worked better. Ah, regrets! The liquid tasted alright, but wasn’t amazing by any means.