Despite the fear these animals cause for many people, the following entries are loveable rats, mice, chipmunks, etc. It might help that they’re all animated (or at least began their existences that way) as that’s just how you can get the most cuteness out of what could otherwise be considered vermin. Here are the Top 5 rodents:

This rat may be one of the few Parisians I actually like! The fact that Remy is voiced by Patton Oswalt is simply a bonus. Interestingly, Oswalt was cast in the movie based off of his food-based stand-up routine. Want some more Ratatouille trivia? Did you know that a wine branded with the name of the film was supposed to be released in a joint venture between Disney, Pixar and Costco, but was pulled because the label featured the animated Remy, something the California Wine Institute was not pleased with, arguing that it encouraged underage drinking.

Remy certainly has some swagger!

Chip, Dale, Monterrey Jack, and the voluptuous Gadget (the only member of the team forced to wear pants!) may be the world’s smallest crime fighters, but they are thorns in the side of villains like Professor Norton Nimnul, Fat Cat, and Rat Capone. Sadly, little Zipper can’t be included in this entry because he’s not a rodent… sorry, buddy. Back to the team, we will get to see them again in the coming years, as Disney has announced plans for a live-action/CGI animation movie. As long as they keep the wicked opening theme song in some capacity, fans everywhere will rejoice!

These two made trying to take over the world fashionable… sure, their zany plans regularly go awry, but that doesn’t mean a strategy won’t ever work and we’ll all become the slaves of genetically-enhanced lab mice! The duo proved so popular that they were given their own series, sadly invaded by Elmyra from Tiny Toon Adventures. There’s a great theory out there that Pinky is actually the intelligent mouse, while The Brain is the insane one out of the two. That would explain why he’s hell bent on escaping his cage and ruling the earth. 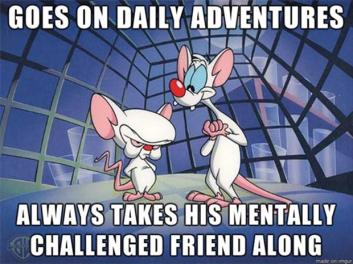 The wise sensei and father figure of the teen turtles may be a rodent of advanced age, but he can still fight when pushed to do so, often defending his shelled family. The one thing that pisses me off about Splinter is how his origin story changes from time to time. In some projects, he was a human turned into a rat, while other times, he was always a rat, who transformed thanks to the mutagen. He’s at his most awesome in the original Turtles movie, when he battles and defeats The Shredder, sending him crashing from a high-rise rooftop into the back of a garbage truck.

While I’ve never been a huge fan of Mickey, some of my favourite things in this world wouldn’t exist without him. Think about it: I met Mrs. Sip in Disneyland, which was only possible thanks to the success of early Mickey cartoons, leading to more animated gems from Walt Disney and company. With those facts, you just have to respect Mickey and everything he’s done in the name of entertainment. As Walt himself famously said, “I only hope that we don’t lose sight of one thing – that it was all started by a mouse.” 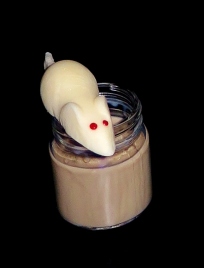 Honourable mentions go to Bernard and Bianca (The Rescuers); Jerry Mouse (Tom & Jerry); and the trio of Alvin, Simon and Theodore Seville (Alvin & The Chipmunks). I really wish I could have included The Chipmunks, who got the Sip Advisor through some tough times with their upbeat music!

Sip Advisor Bar Notes (3 Sips out of 5):
The shot was one thing (it was what you’d expect from mixing Irish Creme and Sambuca), but I think my choice to garnish the shooter with a Gummy Mouse was spectacular. Thankfully, Ma Sip had a few on hand, which I was more than happy to use in the production.