With tonight’s massive super fight between Floyd Mayweather and Manny Pacquiao, I thought we should have a little look into the world of boxing… or at least the fictional side of the sport. Here are some of the greatest characters to ever step into the ring:

I never played Rock’em Sock’em Robots, but any game where the goal is to knock your opponents head off sounds like a lot of fun. The toy was so successful that it has become a pop culture icon and has been turned into video games and an action figure line. The robots even appeared as characters in the movie Toy Story 2, which is a crowning achievement for any game. I never knew that the robots had their own names, including Red Rocker and Blue Bomber (and at one time, Bolt Crusher Bob and Gear Grinder Greg).

Butch Coolidge’s tale in the serial Pulp Fiction begins with his change of heart about throwing a fight. Despite the consequences of disobeying mobster Marsellus Wallace, Coolidge not only doesn’t take a dive, but he knocks out the fighter he was supposed to lose to and even kills him. Things end up getting pretty weird for both Coolidge and Wallace, as they find themselves the prisoners of two sadistic serial killers, who are intent on raping and torturing the men, before putting them out of their misery. Coolidge escapes and saves Wallace, thus earning his freedom from the mob.

Drederick Tatum is The Simpsons universe version of former Heavyweight Champion and ‘Baddest Man on the Planet’ Mike Tyson, right down to having a manager (Lucius Sweet) similar to Don King. Homer Simpson also took a turn at boxing, when it was learned he could take a massive beating and not get knocked out. Guided by boxer turned bartender turned manager Moe Szyzlak, Homer was even placed into a fight with Tatum, for the former champions return to the ring after a prison stint for pushing his mother down the stairs! 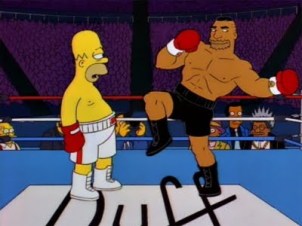 You might not understand a single word this bloke says, but the talking he does with his fists, you will certainly make sense of… unless you’re on the receiving end of his blows and then you might not even remember your own name! Much like Butch Coolidge, Mickey agrees to throw a fight, only to knock out his opponent… twice! Thanks to betting on himself, O’Neil makes quite the killing and at the same time, avoids becoming the victim of a horde of gangsters. Those gypsies are a tricky bunch and that’s before they even get into the ring.

I’m not a fan of Sylvester Stallone – not many are – but I will give him credit for his work with the Rocky franchise. Through the films, the Italian Stallion goes from unknown, small-time fighter to Heavyweight Champion to American hero. Balboa’s battles with the likes of Apollo Creed, Clubber Lang, Ivan Drago, Tommy ‘The Machine’ Gunn, and Mason ‘The Line’ Dixon, are legendary.  The training montages alone in these films are iconic, from boxing in a meat locker, to running triumphantly up stairs, to trying to figure out how to defeat a machine-like Russian.

A special shout out has to go to the characters of the Punch-Out video game series, including Little Mac, King Hippo, Glass Joe, and Bear Hugger. Heck, even Donkey Kong found his way into the franchise and a pair of boxing gloves!

Sip Advisor Bar Notes (3 Sips out of 5):
My first inclination was to use a flavoured vodka to lessen any harshness in the shooter. But I reconsidered, wanting to let the lime flavour do as much as it could to influence the shot, rather than any other tastes. I settled for Zubrowka Bison Grass Vodka to hit on both of my thoughts. The sugar added to the concoction solved any issues with it being too strong and it was much more pleasant than I ever thought it would be.