Legend has it that the word s’more (one of the most popular marshmallow concoctions) is a contraction of “some more”, as in “I want some more s’mores!” As a wordsmith and general random information hound, I’ve often wondered where other words and concepts come from… here’s the answer to some of those origin stories:

I never really thought about the fact that the term Ponzi Scheme (taking money from new investors to pay older investors) came from an actual person. In fact, it came from the originator of the practice. In the early 1920’s, Charles Ponzi started taking money from investors for international postal coupons, promising returns of 50% in 45 days and 100% in 90 days. Although he never purchased the coupons, Ponzi quickly raked in $15 million as the scam went as viral as things could back in that time. Ponzi was later arrested and convicted, but went on to launch other schemes after his release. He eventually died in Brazil, an impoverished man. 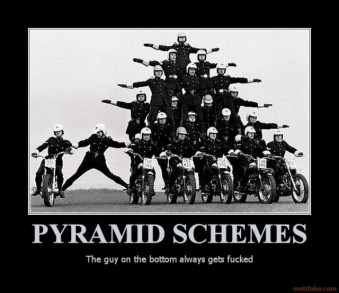 Today, people boycott products and concepts for all sorts of reasons. We have Charles Boycott to thank for that, although it’s not like he ever wanted things to turn out this way. When Boycott tried to evict a number of tenants during the Irish Land War of 1880, the result was being ostracised by his own workers, who refused to lift a finger for their employer; the disruption of trade between Boycott and other local businesses; and even the stoppage of mail being delivered to Boycott. A number of famous boycotts have occurred since, including countries refusing to attend various Olympic Games and the use of boycotts to invoke changes in civil rights, such as the Montgomery Bus Boycott.

In 1789, Dr. Joseph-Ignace Guillotin suggested to the French government that they find a more humane way of executing prisoners. His solution was to rapidly lop off their heads, rather than stick with the traditional methods used previously, such as beheading by sword and axe. The Guillotine would go on to be called France’s ‘National Razor’ – a term Gillette should steal for themselves – and was an immensely popular device, causing spectator events and parties surrounding executions. Despite this, Guillotin was not happy to be so closely associated with the device of death, his ancestors even trying to change its name, by appealing to the French government.

Two of the big four that make up the BDSM culture, can be attributed to people who practiced the acts, as well as wrote extensively on the subjects. Respectively, Marquis de Sade and Leopold von Sacher-Masoch can be credited with being the faces for these sexual behaviours, as introduced by Richard von Krafft-Ebing, a German psychiatrist, in his 1890 work ‘New Research in the Area of Psychopathology of Sex’. Half of Sade’s life was spent in various prisons and asylums, where he wrote many of his compositions. While Sacher-Masoch avoided jail time during his life, he also ended up in psychiatric care. Now, if only we could also explain bondage and domination in a similar fashion.

This right to remain silent, while being arrested by police in the United States, can be attributed to Ernesto Arturo Miranda, who argued that he was not informed what he was confessing to could be used against him as self-incriminating evidence, when he was detained, in 1963, on suspicion of kidnapping, rape, and armed robbery. Miranda was retried without his admissions being used in his subsequent trial and was convicted again. Upon being paroled, in 1972, Miranda would sell autographed Miranda Rights cards for $1.50 each. That was until he was killed in a bar fight in 1976. Many other countries have adopted similar warnings, since this case occured.

The largest s’more ever made weighed 1,600 pounds, consisting of 20,000 marshmallows and 7,000 chocolate bars. This was possible thanks to a 1927 Girl Scout Handbook recipe, which not only outlined the ingredients needed, but gave the treat its name!