The fine folks at Fernie Brewing (how’s that for alliteration – although I’m sure they are actually fine folks!) travelled a fair distance to make this collaboration with P49 work and their efforts definitely paid off with a delicious beverage. 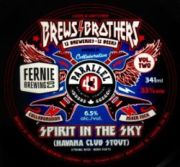 The Spirit in the Sky Havana Club Stout combines two of my favourite things in this world: Havana Club Rum and stout beers. Using oak spirals that have been aged in seven-year-old Havana Club Rum, this stout is potent (6.5% ABV), but also enjoys the traditional attributes of a smooth, mellow, flavourful stout.

Each beer is named after a classic rock song and the Havana Club Stout meets its match with Norman Greenbaum’s Spirit in the Sky. An interesting note about Mr. Greenbaum, was that at one time, he was a member of the psychedelic jug band Dr. West’s Medicine Show and Junk Band. I don’t know why, but that has me incredibly intrigued… and a little scared!

As we wrap up our all-too-brief stay at one of Cuba’s all-inclusive resorts, it’s time to pick up some souvenirs for the folks back at home. A must-have, providing you’re not returning to the United States, is Cuban cigars. Mrs. Sip picked up one for me when she visited the Communist country a few years ago and it was one fine stogie. Here are some interesting facts on Cuba’s trademark treat:

Torcedores are recognized worldwide as being the best cigar rollers and are greatly respected in their homeland of Cuba. In the Seinfeld episode ‘The English Patient’, Kramer brings his own Cuban cigar rollers to New York City, but they are merely Dominicans posing as Cubans. This causes Kramer’s financial backing to fall through and his latest entrepreneurial enterprise to fail. The Dominican’s go on to roll crepes in a restaurant, but roll them too tightly, causing filling to burst out of the pastry and burn customers.

President John F. Kennedy signed the United States trade embargo against Cuba (which is still in effect today) in 1962… but the wily politician waited until he received 1,200 H. Upmann brand petit corona Cuban cigars before putting his pen to paper! It was also revealed later that the trade embargo originally sought to have cigars be exempt. The whole ordeal has branded Cuban cigars as “forbidden fruit” within the U.S. Some Cuban cigar manufacturers moved their operations to the Dominican Republic so they could maintain a profitable partnership with America.

It has been estimated that 95% of the cigars advertised as being “Cuban” and sold in the U.S. are counterfeit. Buyers beware when grabbing smokes across the States.

One Sigmund Freud (the famous and groundbreaking psychoanalyst) was a Cuban cigar aficionado. When asked about the phallic shape of cigars, of which Freud smoked about 20 per day, he replied, “Sometimes a cigar is just a cigar.” Freud’s smoking habit led to him suffering cancer of the jaw and eventually led to his death, which was done in an assisted suicide manner. 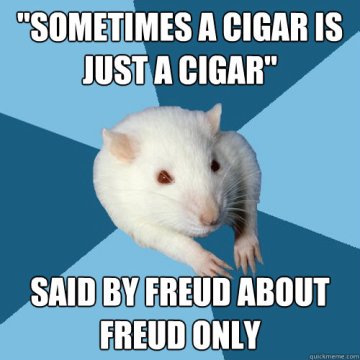 The Cohiba cigar company was established to honour Cuban leader Fidel Castro, with products manufactured only for “friends of the Revolution”. The company finally launched commercial sales in 1982. Interestingly, Cohiba only employs female cigar rollers.

Cuban cigars have gained their reputation and popularity as the world’s top choice in smoking thanks in large part to the country’s environment and temperatures. The island’s humidity makes growing and drying the tobacco leaves easy, especially the leaves used to wrap the cigar, said to be the most important part of the production. The U.S. trade embargo has also caused the cigars to gain a mystique about them, adding a quality of danger to the stogie, as well as driving prices up.

Revolutionist, Che Guevara, once said, “A smoke in times of rest is a great companion to the solitary soldier.” That about sums up the item used to celebrate weddings, births, and other landmark events in one’s life.

I don’t smoke very often at all, but every once in a while, it’s fun to light a cigar up and relax with a drink in the other hand. This is all preferably done in the comfort of a hot tub, so if anyone is offering, I’ll be over as soon as possible!

Sip Advisor Bar Notes (3.5 Sips out of 5):
I don’t know what it is about Ginger, but it seems to work in cocktails, given your libation that extra little bite of flavour. I was worried that this drink would be quite strong with the high Rum quotient, but it wasn’t. It even passed the Mrs. Sip test!

From the Great White North of Canada, we jet set our way to the Republic of Cuba. We have to leave via Canada because no flights from the U.S. go to the communist country. Speaking of communism, it has been discovered that the government of the United States tried to assassinate Fidel Castro an estimated 638 times, as they opposed the dictator’s rule. Here are some of the craziest plans they drew up!

We’ve all seen the famous exploding cigar cartoon gag and apparently the CIA thought it was a pretty good idea, too. Heck, if Bugs Bunny can make it work, why couldn’t they. Castro was known to have a love of cigars (Cuban, of course), so why not slip an explosive one into his collection and let him light his own ending. The CIA also had a plan for cigars contaminated with botulin to be given to Castro, showing smoking definitely can kill! 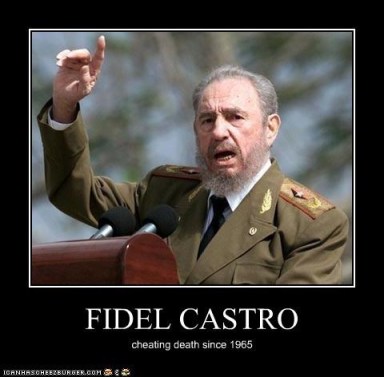 As much as Castro loved his stogies, he also had a penchant for milkshakes, particularly the ones made at the Havana Hilton. Therefore, the CIA tried to poison his frosted treat. Apparently, the plan went awry when the deadly pill froze to the surface of where it was being held and when the would-be assassin tried to pry it loose, the capsule split and the poison was lost. According to longtime Castro bodyguard Fabian Escalante, this was the closest Castro came to meeting his maker.

The Cuban Prime Minister was also an avid scuba diver and this factored into two attempts on his life. First, plans were hatched to give Castro a scuba suit infected with spores of tubercle bacilli. When that fell through, discussion turned to rigging a conch shell with explosives and placing it in one of the areas Castro frequented and favoured when diving.

In their attempt to oust Castro from power, the CIA even turned to some of his many mistresses, hoping they would be vengeful enough to kill the Latin lover. One, Marita Lorenz, even smuggled poison capsules into Castro’s bedroom, but they dissolved in the jar of cold cream they had been stashed in. According to Lorenz, when Castro learned of the plot, he handed her his gun and challenged her to shoot him… she couldn’t even do that.

If only things worked as well for the CIA as they always seem to for James Bond, thanks to gadget wizard Q. The CIA brainstormed such spy contraptions as a hypodermic needle inside a pen, with the hopes someone could get close enough to prick Castro and inject him with deadly toxins and get away with it. Speaking of deadly bacteria, there were also plans to give Castro an infected handkerchief, more commonly known as a snot rag.

If they couldn’t kill him, the American government figured they could at least take him down a couple pegs and taint his image with Cubans. First, they strategized destroying his trademark beard with thallium salt, hoping this would make him look weak to citizens of the republic. Plans were also concocted to fill a radio station he was appearing on with LSD through an aerosol spray, hoping he would embarrass himself to the audience and lose their trust.

Castro once joked about the assassination attempts: “If surviving assassination attempts were an Olympic event, I would win the gold medal.” If you have a clever way you would have used to eliminate the former Cuba leader, share it below. It can’t be any worse than some of the stuff the CIA and others actually tried!

Sip Advisor Bar Notes (4 Sips out of 5):
I have written before about my dislike of Champagne, but this recipe may change my wicked heart. I love Mojitos and it was fun to have the bubbles associated with Champagne as part of the traditional cocktail. The sweetness level can be changed with how much Simple Syrup you choose to add. The group I sampled this drink with preferred little to no sweetness and enjoyed the dryness of the cocktail.