Well, this site has hit a new low (a near weekly occurrence, though!)… I never thought I’d write an article about pop star Rihanna, but here we find ourselves on the beautiful beaches of Barbados and she just happens to be one of the biggest things to ever come from the island country. Let’s take a look at her story:

Rihanna began singing at the age of seven and her career was launched when she signed with rapper Jay-Z’s Def Jam Records (to a six-record deal, no less). It wasn’t until her third album Good Girl Gone Bad, featuring the track ‘Umbrella’ that things really took off for the artist. Since then, Rihanna has worked with some of music’s biggest names, including Eminem, Kanye West, Coldplay, and, of course, Jay-Z. Her other hits include ‘Take a Bow,’ ‘Disturbia,’ ‘Only Girl (In the World),’ ‘We Found Love,’ ‘Diamonds,’ and ‘Stay.’ 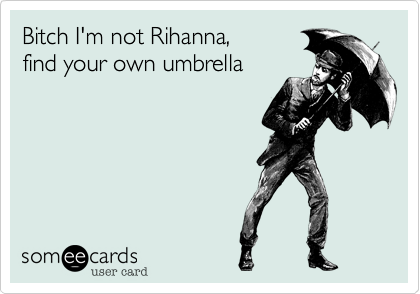 Ironically, Rihanna had to ban people from bringing umbrellas to her concerts, afraid that fans would try to impersonate her dance moves with the rain deflectors and wind up injuring fellow concert-goers. It is for these same reasons that I banned people from bringing cocktail shakers into my performances. Nobody knows how to make love to a shaker like the Sip Advisor!

In an industry run amuck with nicknames, Rihanna is no different. Her monikers include RiRi, the Barbados Babe, Caribbean Queen, and even Rihanna… that’s because the singer’s real name is Robyn Fenty and her middle name has become her stage name. I wonder if the same goes for Madonna, Bono, Sting, and the list goes on and on. Speaking of Madonna, Rihanna has referenced the ‘Material Girl’ as her idol, going so far as to say that she wants to be the “Black Madonna”. Janet Jackson, Whitney Houston, Mariah Carey, Beyoncé, and the late Aaliyah, among others, have also influenced the Barbadian.

Rihanna has taken home seven Grammy Awards, eight American Music Awards, 22 Billboard Music Awards (these must be easier to get), and two BRIT Awards. Her worldwide sales total 30 million albums and 120 million singles. She has enjoyed 13 chart-topping songs and has seen her name on lists like Forbes’ Most Powerful Celebrities and TIME’s 100 Most Influential People in the World.

This year, Rihanna will receive a Fashion Icon lifetime achievement award from the Council of Fashion Designers of America. The girl is only 26 and she’s already being handed lifetime achievements. Damn, the fashion world is so ridiculous. Chew’em up and spit’em out before they’re 30… that’s a lifetime in fashion.

I won’t go into details about the elephant in the room; Rihanna’s assault at the hands of Chris Brown, as that loser doesn’t deserve any attention from this site. All I’ll write, is that this wasn’t the first time her life was tumultuous. Growing up, her father was addicted to cocaine, marijuana, and alcohol and her parents rocky relationship ended in divorce when she was 14. Rihanna was an army cadet growing up, with fellow performer Shontelle as her drill sergeant, but dropped out of school before graduating to pursue her musical career.

Not solely devoted to the music world, Rihanna has appeared in four movies, including Bring it On: All or Nothing; Battleship; This is the End; and Home (an animated film to be released later this year). For her role as Petty Officer Cora Raikes in Battleship, Rihanna was bestowed both a Golden Raspberry Award for Worst Supporting Actress and a Teen Choice Award, proving that adolescents today are idiots.

The sex symbol has also appeared on the cover of a number of publications, most notably, Maxim, FHM, Rolling Stone, and GQ has been romantically linked to baseball player Matt Kemp, as well as rapper Drake. Despite the magazine appearances, she has turned down offers to pose for Playboy on several occasions.

Following in the footsteps of other bombshells, Rihanna has unleashed a few fragrances upon the world. Her scents include ‘Reb’l Fleur’ (2011), ‘Rebelle’ (2012), ‘Nude’ (2012), and ‘Rogue’ (2013). MAC Cosmetics also released a Rihanna line of makeup dubbed ‘RiRi hearts MAC’ (begging the question: who comes up with all these shitty names!?).

And somehow she still became a fashion icon!

For the fans of inked girls out there, Rihanna offers a number of tattoo options. The list actually seems almost endless, but working our way from head to foot: Pisces sign behind right ear; star in left ear; a trail of stars down her neck, as well as a rebelle fleur; the date 4/11/1986 in roman numerals on her left shoulder; “Never a Failure, Always a Lesson” on her right shoulder; a cross on her collar bone; “Freedom in Messiah” and a handgun on her ribs; a Sanskrit prayer on her hip; a goddess Isis on her stomach; a henna-style dragon claw on her hand; “Love” on her left middle finger; “Shhh…” on her right index finger; “Thug Life” on her knuckles; a skull with a pink hair bow on the back of her foot; a gun-shaped Egyptian falcon on her right foot; and music note on her ankle. I think I covered them all, but now I’m out of breath! 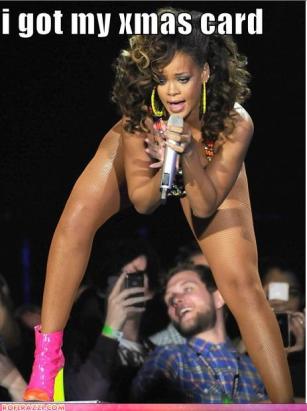 After winning Gillette’s Venus Breeze ‘Celebrity Legs of a Goddess’ Award in 2007, Rihanna promptly insured her gams for $1 million. That same year, she was named the official face of Barbados tourism and holds the title of Ambassador for Culture and Youth. The home country accolades continued to roll in for Rihanna in 2008 when a national holiday was created in her honour. She responded with a free concert for her country folk.

In 2013, Rihanna joined some prestigious company when she had a UK Singles Chart number one for the seventh consecutive year. The others to achieve the feat were Elvis Presley and The Beatles. She is also tied for third most number one singles (13) on the Billboard Hot 100 with Michael Jackson. 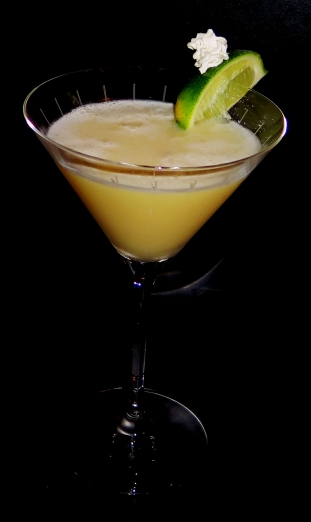 This wraps up the TMZ edition of The Sip Advisor. Before this article, I could probably only name a couple songs by Rihanna or featuring Rihanna… and I’m thankful to say that fact remains true! Nothing against the pop princess, but it’s just not my type of music.

Sip Advisor Bar Notes (4.5 Sips out of 5):
This was a tasty, light martini that provided a rare occasion to appreciate Pineapple Juice. It wasn’t too sweet, which I was worried about going into the drink. The Whip Cream dollop on top of the Lime Wedge was fun and unique. The recipe I read says you should float the Lime Wedge, but when I tried that, it just sank into the cocktail. Perhaps a thin lime wheel would have been more suitable.