With the haunting season just getting underway (although Halloween candy was already on sale during the summer), the Sip Advisor figured it was as good a time as any to delve into the paranormal world. There are so many great ghosts out there that I decided to split the list between animated and humanoid (aka live action) ghouls. This week, we go cartoon ghost hunting. I hope you join me because I’m already a little scared!

I love these three broskis, who are like the departed spirits of the Three Stooges. Instead of Larry, Curly, and Moe, you have Meako, Shreako, and Freako, a trio of ghost hunters, who just happen to be spirits themselves. The only thing bringing their rank down a little is the fact they only appear in one Scooby Doo movie, but it is my favourite of all Scooby adventures. This tale sees Shaggy, Scooby, and Scrappy Doo travel to the estate of Colonel Beauregard, Shaggy’s deceased uncle, who has left everything to his nephew. While there, the gang has to search for the family jewels while solving the mystery of who is haunting the home. 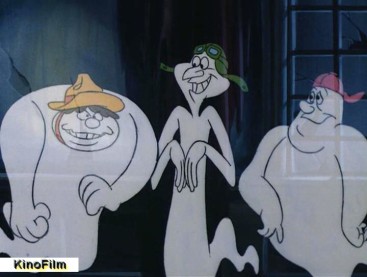 I always liked the creativity that went into the Super Mario Bros. ghost house levels. Avoiding the creepy little apparitions that only follow you when your back is turned added a whole new element of gameplay. There is also the massive King Boo, leader of all Boos, who you have to contend with from time to time. Boo became such a popular character that he joined the gang for their go-karting and board game adventures. His laugh when selected or after doing something naughty to another player is one of the best elements to choosing the spirited one.

This gelatinous blob is pretty disgusting when he makes his very first appearance in the halls of the Sedgewick Hotel, devouring a guest’s leftover room service, before sliming Ray Stantz and covering him with green goop (otherwise known as ectoplasm). Slimer really came into his own during the Ghostbusters cartoon, assisting the team in their escapades. Some quick trivia: Slimer was actually voiced by Ghostbusters director Ivan Reitman in the movies, and Dan Aykroyd referred to Slimer as the ghost of his good friend John Belushi, who was slated to star in the film before his death. Slimer was so popular, he even had his own toothpaste product released.

Delighting and spooking guests since 1969, the Grimm Grinning Ghosts of the Disney theme parks Haunted Mansion attractions are among numerous characters featured on the revolutionary ride. There is rumoured to be 999 happy haunts in each Haunted Mansion and they’re always looking for one more soul to join their party. Sometimes, a hitchhiking ghost may even hop into your doom buggy right before exiting the ride, so beware! Each park’s Haunted Mansion is themed differently and has its own unique storyline, with most characters seeming to have their own backstory. Guests are known to each have their own favourite.

He may be the ‘Friendly Ghost,’ but methinks there’s a dark side to the little guy. No one is “that” friendly without wanting something in return… just ask Mrs. Sip about my behaviour. Anyhoo, I love the parallel The Simpsons made comparing Casper to Richie Rich and wondering if the two were the same. That’s the kind of stuff that blows your mind and keeps you awake at night. Casper is sometimes tormented by his three uncles, the Ghostly Trio of Stretch, Stinky, and Fatso (although their names have varied over time), but Casper seems to have a good handle on things… until his much-rumoured inner darkness in unleashed!

I have to say that I also love the use of ghosts in South Park, including Eric Cartman (thinking he had died from eating KFC and was stuck in limbo), Biggie Smalls, Edgar Allan Poe, and the host of recently deceased (at the time) personalities to appear in the episode Dead Celebrities. South Park… making death fun!

Sip Advisor Bar Notes (3 Sips out of 5):
It’s been a while since I did a drop shot drink and this one sounded pretty interesting. I envisioned an almost root beer float type effect occurring as everything mixed together, but that didn’t necessarily happen. The taste was decent, though and it looked cool watching everything meld.