Hola, amigos! It’s day two of Tequila Week and it’s probably time for a little education on the subject.

I know what you’re thinking, friends: as if you need another liquor lesson so soon after the last one. But fear not, for today is special. We are being joined by The Sip Advisor’s Mexican correspondent, Señor Juan Agave (pictured below). Judging by his photo, he really knows his tequila, or as I like to sometimes call it, to-kill-ya! 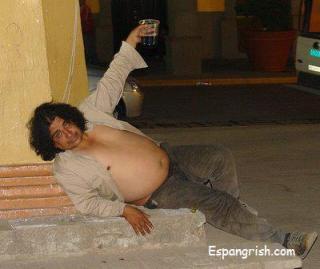 There are five different categories of tequila:

The Extra Añejo category has only existed since 2006 and Joven is not very common, with Blanco, Reposado and Añejo being the most recognizable distinctions. The difference between all the categories, is in smoothness, with longer aging meaning a less harsh taste. If you’re not too picky, don’t worry about it. The booze all ends up in the same place, after all… with the same results. 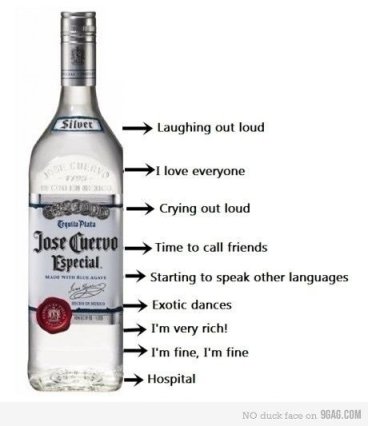 On the other hand, awesome Añejo tequilas can be found for reasonable prices (in places other than Canada, that is) and these can really improve the taste of any mixed drink.

Now let’s tackle the worm myth… I’d put money on the fact that every person who reads this and has taken a trip to Mexico, had at least one person tell them: “Don’t drink the worm, man!” There is no worm. You will never find a reputable bottle of tequila with a worm in it. A worm in tequila is like some kind of moonshine-maker project. If you do find a bottle of tequila in some back alley in Mexico with a worm in it, drink it immediately… this is the true fountain of youth. Please report back to me on your results… after you’re released from the hospital, of course.

There are two municipalities in Mexico named Tequila and both are producers of the liquor. One is located in Veracruz and the other in Jalisco. In Jalisco, the people are known to chase their tequila shots with a drink called Sangrita, meaning “little blood”. It’s comprised of orange juice, lime juice, grenadine, chili powder or hot sauce and a slice or two of jalapenos… hey, why not add the jalapenos? Also, in Jalisco, there is a train called the Tequila Express. Imagine if Agatha Christie’s famous novel was actually titled Murder on the Tequila Express and featured all the characters getting liquored up and into fist fights while solving the crime.

And, very randomly, the song Tequila, originally performed by The Champs, reached #1 on the Billboard Charts on March 28, 1958. It was recorded in just three takes and was never intended to be more than a B-side jam session track. I’m totally going to blast that tune while doing this Saturday’s Super Shot!

As for the Tequila Sunrise and it’s trivial pursuit, well, it has been used for the title of a movie, a pair of songs (by The Eagles and Cypress Hill, respectively) and was the finishing move of pro wrestler Konnan. 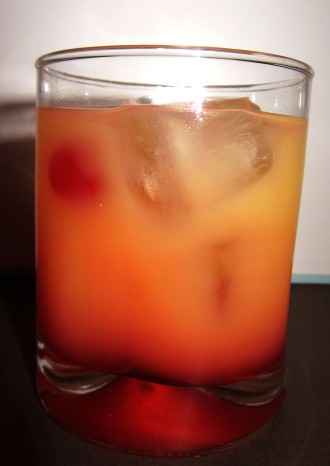 If done properly, or as I usually work, above average, you will have the makings of a beautiful liquid sunrise, with the red atmosphere rising to greet the day and a little fireball in the sky. Mix it all up and the sunrise is complete. In the future, I will also be making the Tequila Sunset, which substitutes blackberry liqueur or brandy for the grenadine!

Sip Advisor Bar Notes (3.5 Sips out of 5):
For some reason, I often find Orange Juice-based drinks disappointing and this recipe was no different. Sure, it looks neat with the Grenadine floating through the juice, but I can’t completely get behind the taste of the mix.