Today is all about education at The Sip Advisor. At least this isn’t a science course and I’m not teaching you about real sea breezes. No, where we’re going, you don’t need any stinkin’ notepads. We’re learning through drinking. So, take off your hats and glasses, because this here’s the wildest ride in the wilderness! (*Gold star if you know where the reference comes from…)

The fraternal twin of the Bay Breeze gets its chance to shine today. What’s funny about the Sea Breeze is how many times the recipe has changed over the years. It’s as if makers of the drink were never fully satisfied with the ingredients… that or they got too drunk and forgot how to make it properly, stumbling upon better recipes accidentally. It began as a gin and grenadine mix during prohibition times, which would later include apricot brandy and lemon juice. Then it consisted of vodka, dry vermouth, Galliano and blue Curacao in the 1930’s (so yes, Sea Breezes used to have blue in it like… well, the sea!) . When cranberry juice began to be a popular mixer with alcohol, the Sea Breeze saw another adjustment to its formula (gone went the blue so that the closest ingredient referencing the sea today is if you use Ocean Spray cranberry juice).

Sea Breeze also has a family, known as the Cape Codder drinks. Descendant from papa Codder are sisters the Greyhound and the Salty Dog, as well as broski, the Bay Breeze. All these drinks saw a dip in popularity during the 1960’s as the U.S. Department of Health announced that cranberry crops were contaminated with toxic herbicides (who dropped the ball on that one?), before making a resurgence in the 1970’s, likely because of disco music (okay, I don’t know that last part for a fact, but you have to blame something and it might as well be disco. What’s disco going to do? Come after me? Get all up in my face and challenge me… to a dance off… which I would lose… dammit!)

Many popular actors and actresses have ordered the Sea Breeze on TV and in movies. This list includes Meg Ryan (French Kiss), David Spade (Just Shoot Me!), Woody Harrelson (The Walker) and perhaps neatest of all, especially for all the geeks out there who were into the whole Buffy/Angel series (which I may know all about having been forced to watch both entire series – that’s 12 seasons of awful – by a girl I once dated… and still married, despite the torture), the collectible figure of Lorne from Angel comes with his very own Sea Breeze accessory, as it was the character’s drink of choice.

Now let’s all reenact the “Oh Captain, my Captain” scene from Dead Poets Society… no, you don’t want to do that for me… alright, but Robin Williams – the original Furby – is going to hold this over my head for years to come. 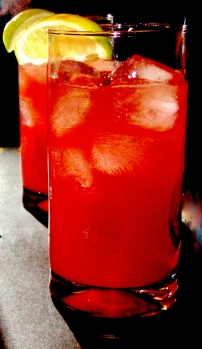 Please turn in your pencils, as time is up on the exam. Your final grades will be in at the end of the week and have a great summer. It may only be January, but it’s nice to think ahead to those warmer months, those colder drinks and the wonderful smell of barbecued meat!

Sip Advisor Bar Notes (3 Sips out of 5):
The Sea Breeze fared just as well as its sibling the Bay Breeze in that it was a decent drink, but nothing to take your breath away. They are both nice summer drinks and maybe I made the mistake of reviewing them in January.