If the Sip Advisor had to put his money on which soda war had the best advertising campaigns, it would probably go to the great battle of lemon-lime beverages, fought primarily between 7-Up and Sprite forces. Here are the most memorable promotions from each combatant:

Featuring Orlando Jones of Mad TV fame, this series first showed the comedian walking the streets in a shirt that said “Make 7” on the front and “Up Yours” on the back. He would then tell passersby to “Make 7 Up Yours”, to which those he offended would respond by saying stuff like “Same to you!” Taking advantage of the popularity of the slogan, t-shirts were even released, of which the Sip Advisor proudly owned one. The other commercials were also very funny.

Sprite: “Image is nothing. Thirst is everything. Obey your thirst.”

This campaign featured a series of ads that poked fun at other drink company promotional concepts. One in particular, featured legendary wrestler Sting showing up to wrestle an adolescent boy, who thought swigging some Sprite would give him the skills necessary to battle the grappler. Another sees cute orange drink mascot Sun Fizz come to life, only to terrorize an entire family, including their dog. Damn, the late 90’s to early 2000’s were fun. 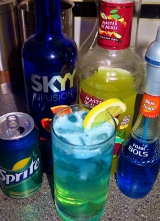 Of the two campaigns presented above, I find it very hard to pick a winner. I think I have to give the slight edge to 7-Up, given I actually owned the t-shirt and have been a long-time Mad TV fan.

Sip Advisor Bar Notes (3.5 Sips out of 5):
I feel I’ve seen recipes similar to this before, with different names. For the Blue Curacao content, I went with my trusty foam pump, which helped finish the cool colouring of the drink. I also used Skyy Blood Orange Vodka to complete the citrus experience. All in all, the cocktail was pretty good, if a little on the sweet side.