A Pirate’s Life for Me

The Pirate Code was introduced by Bartolomeu Português of Portugal in the 17th century. From there, each captain adjusted the regulations to fit their desires and sometimes even changed the rules for each journey. Each crew member was then asked to sign an agreement ratifying the code, before swearing an oath of allegiance to the captain and ship. All the expected stuff was there, such as how to split any booty (wow, that came out much more sexually than I had intended) and what punishment was to be expected for abandoning the crew in times of battle. Let’s take a look at some of the more interesting items the code produced:

Article: Rights to fresh provisions and strong liquors, unless they become scarce

Nuts to the provisions, let’s go straight to the strong liquors! I’m sure an argument could be made, even if supplies ran low that you were simply trying to fend off scurvy and needed whatever booze was available. Granted, other ingredients are needed to fight the disease, but pirates wouldn’t have known that. 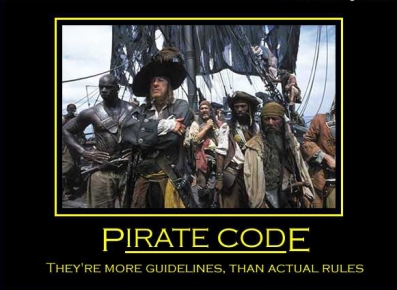 Article: Lights and candles are to be put out at eight o’clock at night… if any crew wants to continue drinking, it must be done on the open deck

Eight o’clock doesn’t seem very badass and not what I expected from buccaneers, but at least you can continue getting your drink on if you were so inclined. I would have expected pirates to stay up until at least 12, maybe even 13, singing songs of the sea and setting towns ablaze to light their parties.

Article: Not allowed to fight on the ship, but save it for land, using swords and pistols duel style

The pirates duel was kind of crazy. After their paces, they were allowed one shot with a loaded pistol and if that failed, it was a race back to the starting point where cutlasses were used until blood was drawn. That sounds like the makings of a hot new reality TV series, which I’ll soon put into production.

Article: To compensate any injured crewman, according to the severity of his injury

We’re always told that pirates were in it for themselves and nothing else, but this article proves they were willing to look after each other. A lost limb usually meant a payout of 600-800 Pieces of Eight, while more minor inflictions were judged on a case by case basis. Interestingly, in some codes, a right arm or leg was worth more than a left arm or leg… take that sinister ones. Hands, fingers, and even eyes were the least valuable body parts. Who needs their vision, right!? 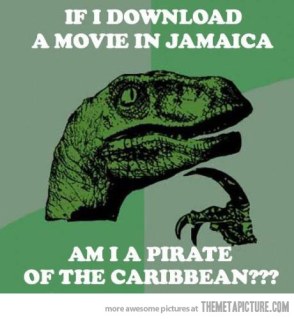 Article: If a crewman betrays the ship, he will be marooned with one bottle of water, one bottle of powder, one weapon and one shot

I gotta say, I’m greatly disappointed that the pirates wouldn’t at least include a little flask of booze for the disowned crewman, but that just leaves more for those still aboard the ship. If I was the marooned pirate, I would ration that bottle of water to the very last drop, hoping some other ship passes and takes me into their crew.

Article: To be amorous with a woman without her consent should be punished by death

This kind of proves the Pirates of the Caribbean (where most of us have learned the entire extent of our pirate knowledge) women chasing scene all wrong. They say that there is no honour among thieves, but this may counter that theory, although the bad acts towards women probably still occurred regularly.

Article: Whoever sees a sail first, shall receive the best pistol found aboard the vessel when plundered

This is like an epic game of ‘I spy with my little eye!’ Problem is most pirates were probably so out of their mind drunk that their blurred vision couldn’t win them this awesome prize, had they even wanted it. On a side note: I have to incorporate the word plunder into my vocabulary more regularly.

Article: Anyone drunk during pirating will be punished according to what the captain and majority of the crew see fit

This could end with the Sip Advisor walking the plank. It also begs the question: Is there any reason to be a pirate if you can’t be shitfaced most of the time? Being a pirate is about breaking the bonds that normal folks are tied to and going on adventures… and many of those adventures should be of the inebriated variety!

In a perfect world, we would still live according to the Pirate Code and I would thrive and flourish in that society. I’m good at following the rules, as well as getting deep into drinking, making me a prime candidate to work my way up the pirate ladder and eventually becoming a captain of my own ship. Perhaps I should explore career options with today’s Somali pirates!

Sip Advisor Bar Notes (4.5 Sips out of 5):
This drink was strong (not too strong, mind you), but had a very nice taste. The citrus notes, such as Grand Marnier and Lime Juice were particularly pleasant, as was the Port. I actually used Cachaca as my Rum addition and I think that helped with the whole blend.