Each month, the Sip Advisor will alphabetically travel Canada, discovering the best each province has to offer in a variety of subjects. We will also featuring a drink the area is known for. Today, we’re in Manitoba, the province at the longitudinal center of Canada. Let’s see just how centered Manitobans are:

Nicknames: Among monikers like Keystone Province (for Manitoba’s shape and location amongst the rest of Canada) and Postage Stamp Province (also for Manitoba’s shape), I lean towards Canada’s Heart Beats – Travel Manitoba’s catchphrase since 2014 – or Friendly Manitoba, which adorns licence plates in the province.

Motto: “Glorious and free” – If you’re going to be free, you might as well be glorious, too!

Food: The Salisbury House restaurant chain claims to have introduced hamburgers to Manitoba in the 1930s. Known affectionately as Sals, the eatery is famous for their Nips, burgers which are a nip or a bite of Salisbury steak, the dish which the restaurant was named after. Sals also serves another Manitoba institution, the Flapper Pie, which they call a Wafer Pie.

Drink: Crown Royal Whiskey – a preferred alcohol of the Sip Advisor… seriously, I currently have five bottles of different varieties from the brand – is manufactured in Gimli. It was first introduced in 1939 for a tour of the country by King George VI and Queen Elizabeth and has grown to become the top selling Canadian whiskey in the U.S. Crown Royal is perhaps best recognized for the felt-like bags the bottles come in.

Site to See: Churchill is known as the Polar Bear Capital of the World and it is accessible for people to tour in the safety of caged tundra buggies. It is best to visit in the fall, when the bears can be viewed hunting seals on ice floes. Churchill even has a polar bear prison and locals are asked to leave car doors unlocked, in case people need to escape from a bear.

Street: Where the Red River and Assiniboine River meet in Winnipeg is known as The Forks. The area was designated a National Historic Site in 1974. Today, the popular Forks Market can be found there, hosting numerous restaurants, shops and stalls. During the winter, an outdoor skating rink is a widely used attraction of The Forks.

TV Show: Falcon Beach originally began as a made-for-TV movie before becoming a series that lasted two seasons and 26 episodes. The show was similar to The O.C. and was unique in that for each episode, two versions were filmed, one meant for Canadian audiences and another for American viewers, each using locations and terms unique to that country. The series was filmed at Winnipeg Beach.

Movie: The Ice Road, starring Liam Neeson and Laurence Fishburne, is about the aftermath of an explosion at a Manitoba diamond mine, which has trapped 26 miners. Neeson and Fishburne play truck drivers who lead a mission to save the miners, traversing the province’s frozen lakes and icy winter roads to get there. It was filmed in Île-des-Chênes and Gimli.

Book/Author: The Stone Angel was written by Margaret Laurence. It tells the tale of Hagar Shipley, searching for closure in her life, as she prepares to be moved into a nursing home by her son and daughter-in-law. The book was made into a 2007 film, starring Ellen Burstyn. The movie also features Elliot Page, before his breakout role the same year in Juno.

Fictional Character: Shirley Holmes, the great-great niece of Sherlock Holmes, is the titular character of the children’s mystery TV series The Adventures of Shirley Holmes. Shirley was played by Meredith Henderson, who won a Gemini Award for Best Performance in a Children’s or Youth Program or Series for her portrayal. Filmed in Winnipeg, the series contains many nods to the stories of Sherlock Holmes.

Fictional City: Manawaka is a fictional setting often used for the novels and short stories by Margaret Laurence. It is based on Laurence’s hometown of Neepawa. Works using Manawaka include The Stone Angel, A Jest of God, The Fire-Dwellers, A Bird in the House, and The Diviners. Laurence was a top figure of Canadian literature and was among the founders of the Writers’ Trust of Canada.

Actor/Actress: Anna Paquin, star of True Blood (as Sookie Stackhouse) and the X-Men franchise of movies (as Rogue), was born in Winnipeg. Paquin won an Oscar for Best Supporting Actress at the very young age of 11, for the film The Piano. It was also her acting debut, so that’s a good start to a career. Paquin is still going strong through both movie and TV roles. 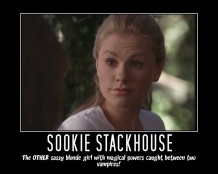 Song: There’s a song called Murder Me In Manitoba, but I think I’ll go with Stompin’ Tom Connors ode to the province, simply titled Manitoba. I mean, the ditty includes lines such as “Manitoba, you’re my heaven”. It should also be noted, rock classic Takin’ Care of Business was created by Winnipeg formed group Bachman-Turner Overdrive, and the province probably thinks of the song as an unofficial anthem.

Band/Musician: Manitoba has quite the musical history. Among the artists to hail from the province, rocker Tom Cochrane has enjoyed a long and successful career. Cochrane began with the group Red Rider, before going solo with hits such as Life is a Highway. I also have to give a special shout out to children’s musician Fred Penner, whose songs and TV show are memorable from my childhood.

People: It’s hard to believe the inspiration for Ian Fleming’s famous character James Bond was Winnipeg-born soldier and spymaster Sir William Stephenson. Fleming once wrote: “James Bond is a highly romanticised version of a true spy. The real thing is… William Stephenson.” Best known by his codename Intrepid, Stephenson worked as a conduit between Franklin Roosevelt and Winston Churchill, even being credited with bringing the U.S. into World War II as a Western ally.

Animal: The bear A. A. Milne used as his inspiration for Winnie the Pooh was named Winnipeg, given the moniker by Lt. Harry Colebourn, after his hometown. Following World War I, Winnie was supposed to make her new home at Assiniboine Park in Winnipeg, but remained at the London Zoo until she died in 1934, at the age of 20. Despite never reaching Assiniboine Park Zoo, a bronze statue of Winnie, as well as a gallery of items regarding the famous bear, can be found there.

Invention: Winnipeg’s Harry Wasylyk (along with Larry Hansen of Ontario) invented the polyethylene garbage bag. The bags were originally sold to the Winnipeg General Hospital, as they weren’t intended for domestic use. Once Wasylyk and Hansen sold the invention to the Union Carbide Company, green garbage bags for home use were released in the late 1960s, known as Glad garbage bags.

Crime: A crime that made headlines across Canada was the 2008 beheading of Tim McLean aboard a Greyhound bus. The attack was committed by Vince Li, a complete stranger to the victim. Out of nowhere, Li began stabbing McLean, causing the bus driver and other passengers to flee the vehicle. Li then decapitated McLean and even ate some of his flesh. Following a standoff with police, Li was arrested. Less than a decade later, Li was absolutely discharged and lives free.

Sports Team: The Winnipeg Jets (NHL) and Winnipeg Blue Bombers (CFL) are the two major pro sports teams in the province. There was an earlier version of the Jets, which began in the World Hockey Association before that league merged with the NHL, but the franchise moved to Phoenix, Arizona in 1996. American Hockey League club the Manitoba Moose shares an arena with the Jets (their NHL affiliate).

Athlete: Manitoba is known for their decorated speed skaters, including Susan Auch, Cindy Klassen and Clara Hughes. Winnipeg’s long track speed skating oval is named after Auch, who won two Olympic silver medals and a bronze over her career. Meanwhile, Klassen won six Olympic medals, including five at the 2006 Games. Lastly, Hughes has competed at both the Winter and Summer Olympics, winning at both in speed skating and cycling, respectively.

Famous Home: Dalnavert, also known as MacDonald House, was designated a National Historic Site in 1990. It was the home of former Premier Hugh John Macdonald, the son of Canada’s first Prime Minister, John A. Macdonald. The estate was originally restored by the Manitoba Historical Society and welcomes visitors year round.

Urban Legend: The Manitoba Legislative Building is said to be haunted. Of note, the building’s grand staircase is said to be where the ghost of a man wearing a top hat is thought to reside, while other spirits inhabit the area nearby. Meetings between all these spectres are said to occur, with security guards being sure to knock before entering any room, so as not to disturb the proceedings.

Museum: The Canadian Museum for Human Rights can be found in Winnipeg. It’s mission is to “explore the subject of human rights with a special but not exclusive reference to Canada”. Opened in 2014, the museum was the first national museum created since 1967 and first ever located outside the National Capital Region of Ottawa. Exhibits include a look at Indigenous issues, as well as the Holocaust and other genocides from around the world.

Firsts: Beginning in 1959, Winnipeg became the first North American city to operate a central emergency system. They originally went with the number 9-9-9, but changed to 9-1-1, when the number was proposed by U.S. representatives. Manitoba was also the first province to let women vote in provincial elections and ban indoor smoking in public places.

Company: Old Dutch Foods, makers of some of my favourite potato chips of all-time, have their Canadian headquarters in Winnipeg. They also have a production plant there, so I must make a pilgrimage to the holy land one day. It should also be noted, restaurant chain A&W was founded in Canada in Winnipeg in 1956. A&W mascot The Great Root Bear originated in Canada in 1974, appearing in the U.S. two years later.

Events: The Red River Resistance/Rebellion of 1869 resulted in Manitoba eventually becoming a Canadian province in 1870. The uprising was led by Louis Riel, leader of the Red River Colony. During the conflict, Thomas Scott, a pro-Canada opponent to Riel, was arrested and later executed by firing squad. Years later, this would be remembered and referenced as a reason Riel himself was hanged.

Miscellaneous: Wheelchair Rugby, also known by the tame title Murderball, was created in Winnipeg by wheelchair athletes Gerry Terwin, Duncan Campbell, Randy Dueck, Paul LeJeune, and Chris Sargent, in 1975. Today, the game has grown to be a Summer Paralympic sport, played in 30 countries. The activity is comprised of elements of ice hockey, basketball, handball and rugby. 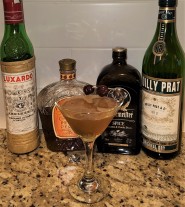 There were some interesting Manitoba-created cocktails I would have loved to make for this article, but I’m not sure where I would find Saskatoon Berries, needed for both the Manitoba Martini and Manitoba Made beverages. Thus, I went with The Winnipeg, feeling Crown Royal Whiskey should be included. I used Jagermeister in place of Amaro, as it’s an herbal liqueur I had on hand.