Each week, the Sip Advisor will alphabetically travel the United States, discovering the best each state has to offer in a variety of subjects. Today, we travel to Massachusetts, a state that has more nicknames – Bay State, Pilgrim State, Old Colony State, Puritan State, Baked Bean State – than seems necessary, but it’s a place the Sip Advisor has always wanted to actually visit, so I’m looking forward to this foray:

Motto: “By the sword we seek peace, but peace only under liberty” – What results do you get with a gun?

Food: Massachusetts folks must have quite the sweet tooth. Boston Cream Pie, cake stuffed with custard or cream and finished with a chocolate glaze, is the State Dessert. The state is also famous for Fluffernutter sandwiches, which combine peanut butter and marshmallow fluff (invented in Massachusetts). Even Boston Baked Beans have a sweetness to them, thanks to the molasses used in their production. 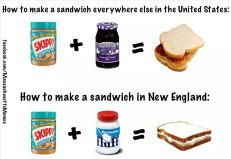 Site to See: Martha’s Vineyard and Cape Cod, the popular summer resort areas, connected by a ferry, draw countless tourists each year. A number of celebrities, from actors and musicians to politicians and other luminaries have homes on the affluent Martha’s Vineyard or are regular visitors to the area.

Street: Another top attraction for the state is the Freedom Trail, which stretches for 2.5 miles through Downtown Boston. Along the route, 16 attractions relating to the founding of the country can be found, including the site of the Boston Massacre, the Paul Revere House and the Bunker Hill Monument.

TV Show: Dawson’s Creek… just kidding, the pick here has to be Cheers, the bar-set sitcom, which entertained audiences for 11 seasons and 275 episodes and won 28 Emmy Awards out of a record 117 nominations. Fans of the series can visit the Boston bar, which provided the exterior shots for the show. Formerly known as Bull & Finch, in 2002, the pub officially changed its name to Cheers.

Movie: The Departed is among the Sip Advisor’s all-time favourite films. Starting with an all-star cast, including the likes of Jack Nicholson, Leonardo DiCaprio, and Matt Damon, this tale of police and gang infiltration on the streets of Boston, takes many twists and turns with viewers never knowing what to expect next. The Departed won the 2007 Oscar for Best Picture. 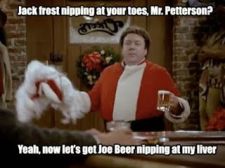 Book/Author: A number of celebrated authors hail from Massachusetts, but none are more beloved than Theodor Geisel, better known as Dr. Seuss. Born in Springfield, Seuss would go on to write children’s classics Horton Hears a Who!, The Cat in the Hat, How the Grinch Stole Christmas!, Green Eggs and Ham, and many others over a long and successful career.

Fictional Character: Ted, the teddy bear come to life in a pair of comedy films, may have started out sweet and cuddly, but as he grew older, he became a sex-crazed, foul-mouthed stuffed being. Voiced by Family Guy creator, Seth MacFarlane (who also wrote and directed the movie), Ted still manages to be loveable, despite his crude behaviour.

Fictional City: After using Dawson’s Creek for a joke earlier, I will give the teen drama a little love here. The setting was originally supposed to be North Carolina, based on creator Kevin Williamson’s experiences, but was changed by the studio to Massachusetts and the fictional town of Capeside. North Carolina was used still used for primary filming, though.

Actor/Actress: Hollywood A-listers, Ben Affleck and Matt Damon, grew up together in Cambridge and are synonymous with Boston film. They have appeared together in films, most notably the Boston-set Good Will Hunting, which they co-wrote and won a Best Original Screenplay Oscar for. Other top stars from Massachusetts, include Mark Wahlberg, Uma Thurman, John Krasinski, Kurt Russell, Steve Carell, Elizabeth Banks, Amy Poehler, Chris Evans, and countless others.

Song: I’m Shipping Up To Boston by the Dropkick Murphys (formed in Quincy) is an amazing track, best remembered as the opening theme to The Departed. Written by folk singer-songwriter Woody Guthrie, it is also used as an anthem for Boston-area sports teams.

Band/Musician: Rock legends, Aerosmith, were formed in Boston, in 1970. The group has released numerous albums and are best known for hits such as Sweet Emotion, Dream On, Walk This Way, and I Don’t Want to Miss a Thing. Aerosmith was most recently doing a concert residency in Las Vegas and had planned to celebrate their 50th anniversary on September 18, 2020, with a concert at Boston’s Fenway Park.

Animal: The State Dog of Massachusetts is the Boston Terrier, which was voted the Boston University (BU) mascot, in 1922. The real-life dog was named Rhett, after the Gone with the Wind character, for his love of Scarlett, as BU’s primary colour is scarlet. Rhett attends BU Terrier’s games and other school events and has a rivalry going with Boston College’s eagle mascot, Baldwin.

Invention: Massachusetts is the birthplace of sports like basketball and volleyball, as well as being where the telephone and birth control pill were successfully conceived. However, one creation tops them all, the chocolate chip cookie, which was introduced to the world in 1938, by chef Ruth Graves Wakefield, while she owned the Toll House Inn, in Whitman.

Crime: The Boston Strangler was credited with the deaths of 13 women in Boston, in the early 1960’s. The case is also known as the Silk Stocking Murders, as many of the victims were strangled with their own nylons. Albert DeSalvo confessed to the crimes (later recanted), although some dispute the number he was involved with. DeSalvo, who was killed in prison, while serving a life sentence, had his DNA linked to the last Boston Strangler victim, in 2013.

Law: It is illegal to use tomatoes when making clam chowder, as that turns it into the red Manhattan variation of the dish, while the New England version, which is very popular in Massachusetts, is white. There’s also a clear style, served mostly in Rhode Island.

Sports Team: Boston is home to the Red Sox (MLB), Bruins (NHL), and Celtics (NBA), while the New England Patriots (NFL) play in nearby Foxborough. The state is also well known for the annual Boston Marathon, which sadly was the site of a bombing during the 2013 edition of the race. 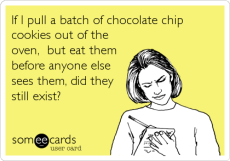 Athlete: Born in Brockton, boxer Rocky Marciano remained undefeated (49-0, with 43 knockouts) throughout his entire career, highlighted by a reign as heavyweight champion from 1952-1956. Marciano is largely credited as the inspiration for Sylvester Stallone’s Rocky Balboa character. Sadly, Marciano died at the age of 45, in an August 31, 1969 plane crash.

Famous Home: The Lizzie Borden House, located in Fall River, is now a bed and breakfast, but it was once the site of a grizzly double axe murder, with Lizzie as the prime suspect and her father and stepmother as the victims. Lizzie was acquitted at trial and lived the rest of her life in Fall River, but in a different home.

Urban Legend: The Bridgewater Triangle is a 200 square mile area in southeast Massachusetts that has been referenced for sightings of everything from UFOs to ghosts to Bigfoot-like creatures. Landmarks include, Hockomock Swamp, Dighton Rock, Freetown-Fall River State Forest, Profile Rock, and Solitude/Suicide Stone.

Museum: The Museum of Bad Art has four locations throughout Massachusetts, home to “art too bad to be ignored.” The museum’s mission statement is: “to celebrate the labor of artists whose work would be displayed and appreciated in no other forum.” Two pieces have actually been stolen from the museum, leading to humourous responses, such as a reward offer of $6.50 for one piece to be returned and the installation of a fake security camera. 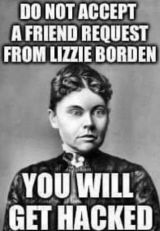 Firsts: On May 17, 2004, Massachusetts became the first state to legalize same-sex marriage. Within the first week of legalization, 2,468 couples obtained licences to be married, including some from outside the state. Same-sex marriage was finally legalized across the country in 2015.

Company: Dunkin’ Brands, the parent company of Dunkin’ Donuts and Baskin-Robbins, is headquartered in Canton. The first Dunkin’ Donuts was opened in Quincy, under the name Open Kettle, in 1948. That location is still in operation today (rebranded Dunkin’ Donuts, in 1950), outfitted in a retro style that makes patrons feel like they’re stepping back in time.

Events: The American Revolution was largely born in Massachusetts and propelled by the 1773 Boston Tea Party, which saw protesters board British ships and dump the cargo of tea aboard them into Boston Harbor. The Boston Tea Party Museum features replica ships from the incident, as well as an authentic tea chest.

Miscellaneous: Massachusetts is known for some other very notable events in history. These include the Salem Witch Trials, where 20 women and men were executed for being suspected witches, as well as the First Thanksgiving, at Plymouth, where a successful harvest was celebrated, in 1621, with a three-day feast. 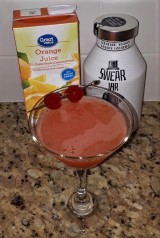 This cocktail has quite the story attached to it, said to be created in celebration of the election of politician Martin M. Lomasney to the Massachusetts legislature, honouring the area which helped him win, Ward 8. When originally created in 1898, at the Locke-Ober restaurant in Boston, the drink was garnished with a mini Massachusetts State Flag.