There are jokes out there that Boxing Day got its name from people packing up the gifts they got for Christmas, in order to return them to stores for refund or exchange. Same goes for people hastily packing up their holiday ornaments mere hours after their family celebrations. While both are completely untrue, here are some things you could be doing on Dec. 26! 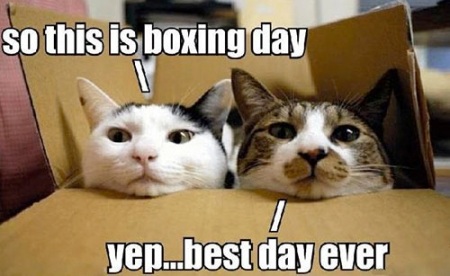 Malls and stores are madhouses on this day and I prefer to not have to deal with either. I don’t really think great deals are achieved and the headache of waking up early and dealing with crowds isn’t worth it. The couple times I have previously gone Boxing Day shopping were more hassle than anything else, like the year I bought a new laptop, with very little savings, and in the outlet’s haste, they didn’t even load it up properly and I had to return to the outlet numerous times to drop off and pick up my new computer.

This year, like last Boxing Day, I have been given the task of playing barkeep for my family and in-laws, as they enjoy the Christmas afterglow with food, treats, and being incredibly lazy. Thankfully, this year, I’ve taken Dec. 27th off from work and can join in the celebrations, instead of having to drive home later in the evening and get ready to return to work the next day. It will be a rocking open house, indeed!

As I outlined in an earlier post, there’s a lot of sports to be consumed during the holidays. Boxing Day features the kickoff of both the World Junior Hockey Championship and Spengler Cup, as well as test cricket matches and a yacht race in Australia. In the UK, each football league holds a full slate of matches and throughout Africa, prize fights are held, given true meaning to the name ‘Boxing Day’! Apparently, Boxing Day is also a popular day for horse racing in different parts of the world.

Polar Bear Swim… yeah, that could be worth watching, too!

If you’re not cozied up watching sports, you could pop outside into the fresh air and enjoy some physical activity. There used to be an annual fox hunt in England, but while that has been outlawed, the powers that be can’t ban us from playing sports like hockey, soccer, and football, or participate in winter activities like skiing, snowboarding and ice skating. Make sure to include the young ones and give them an idea of what it’s like to be outdoors for a change.

Boxing Day could provide the perfect opportunity to pitch in somewhere in your community and help those less fortunate. My donations to this world are this wonderful website and all of its free content, which until I’m paid to operate, will serve as my community service. There are so many other ways for you normal folks to lend a hand, but I’ll leave that decision to you… or you could just send money my way and turn this non-profit into a fully functioning industry!

What do you prefer to do with your extra day off for Boxing Day? If it’s enjoying your new gifts while getting drunk off your ass, join the club!

Sip Advisor Bar Notes (4.5 Sips out of 5):
This cocktail is perfect for dessert or a nightcap, with Chambord kicking in a bit of berry flavour amongst the Devil’s Food Vodka chocolate taste. Sometimes something as simple as a couple Jellybeans can make a really nice garnish. Simplicity can be a beautiful thing!