As we make our way to the country of Chile (not the food, although that sounds pretty good too and would go well with today’s drink) the Sip Advisor makes a point of learning something new every day… and today’s fresh factoid is a doozy: Did you know that Easter Island, located among the Polynesian islands and home to the Moai statues, is actually Chilean land? The more you know *rainbow star swipe*! Let’s take a closer look at this mysterious island:

The entire island, also known as Rapa Nui, is a UNESCO World Heritage Site, as it offers a spectacular chance for researchers to learn about some of the world’s earliest civilizations. The Moai statues, for which the Easter Island is best known, were constructed between 1100-1680 CE. 887 of the figures have been catalogued and it’s estimated that each statue took one year to complete and was carved by a team, using volcanic ash from the extinct Rano Raraku volcano. Each sculpture represented the deceased head of a family.

The Moai civilization believed that the dead provided everything their people needed, including health, successful crops, good fortune, etc. Most Moai settlements were located along the coast and that is why the statues are found there, facing inwards to look over the people and with their back to the spirit world of the sea.

The Birdmen Cult, whose leader could be anyone from wrestler Koko B. Ware to basketball star Chris Andersen (both enjoyed careers with the nickname Birdman), also once inhabited the island, following the Moai era. Also known as Tangatu Manu, they form a large part of the Rapa Nui mythology and their decorations can still be found at churches on Easter Island.

Easter Island covers only 63 square miles and is one of the world’s most isolated locations, inhabited by a population of only 4,781, as of 2009. Back in the day, constant clashes between tribes occurred on the small space and with limited resources and disease, it wasn’t long before the island fell to pieces. Chile gained control of Easter Island in 1888 and used it as an expansive sheep farm, protected by the Chilean Navy, until opening it to the public in 1966. At that time, the leftover Rapa Nui citizens were made people of Chile. 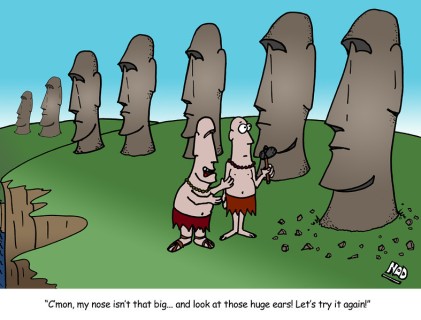 As a massive fan of water, the Sip Advisor finds it incredibly disappointing that Easter Island lacks any freshwater source. That said, it is a freakin’ island, which receives a fair amount of rain. For this Vancouverite, it would certainly feel like home. Tourists can stay on Easter Island, but like other remote locations, goods and services can be much more expensive than in other parts of the world. The area is accessible by the Mataveri International Airport.

You might be asking: What else is there to do on Easter Island, other than view the statues. Well, part of the Red Bull Cliff Diving World Series is held there, giving the Sip Advisor and fellow thrill-seekers a chance to join the Moai with smushed-in faces. Fishing is also a popular activity, as is watching the beautiful Polynesian women dance in revealing outfits!

In recent years, Easter Island has been cited as an example of what can happen when natural resources are mass consumed, which caused its basic extinction at one point in history. The island has been used as a metaphor by some scientists to show what could happen if the earth’s population doesn’t change its ways, although there are also opponents to this example. 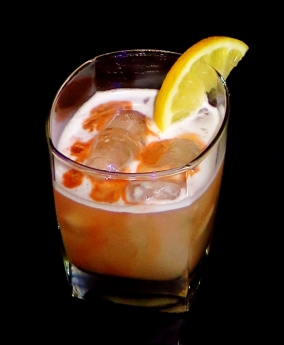 If I know Mrs. Sip as well as I think I do, then you can bet we will one day travel to this unique destination. Hopefully they serve drinks in Moai statue-themed glasses and they’re not one of those anti-alcohol locales!

Sip Advisor Bar Notes (4 Sips out of 5):
This is one of Mrs. Sip’s favourite cocktails, although she enjoyed them in Peru, instead of Chile. It was a first try for me, as I kept saving the cocktail for when this project rolled around. I enjoyed it, but I wonder what the drink would taste like with Lemonade subbed in for the Lemon Juice? I’ll have to give that a try at some point. For those who haven’t yet tried Pisco, it reminds me of Tequila, but it perhaps a little sweeter.