Christmas is right around the corner and these are some of the gifts you wouldn’t want to find under your tree. In most cases, the thought is there, but the results just don’t pan out. Let’s see what will be sent to donation in the very near future:

All Bart wanted for Christmas was the violent video game Bonestorm, going so far as to steal a copy from the local Try-N-Save department store. Of course, he gets caught, breaking his mom’s heart. After making amends for ruining the family holiday photo, Marge says that she has found the perfect gift for Bart. When it’s video game-shaped, he quickly unwraps the package to reveal… Lee Carvallo’s Putting Challenge. It’s not what he wanted, but having his mom’s love again is all he really needs. 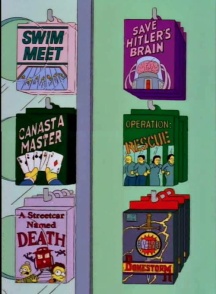 While the rest of the WNYX staff receive sports cars – after complaining about their original gifts of repurposed baseball hats from station owner and eccentric billionaire Jimmy James – Matthew is left out, receiving only a set of Fibber McGee and Molly tapes. Not only does he miss out on a car because Mr. James tried to get personal gifts for the staff after his first misfire (before resorting to the expensive cars), but Matthew’s favourite old time radio show is Jack Benny.

#3: A Pebble – A Muppet Family Christmas

Don’t get me wrong, this Christmas special is beloved by the Sip Advisor and the entire Sip Kingdom, but a pebble as a present is a horrible idea. You can tell it’s bad because after the Fraggles give the rock to Robin the Frog (complete with song trying to justify why such an awful offering has occured), he quickly flips it, re-gift style, to Grover. I never really got the whole Fraggle Rock crew and am glad they spent most of this momentous Christmas celebration underground. 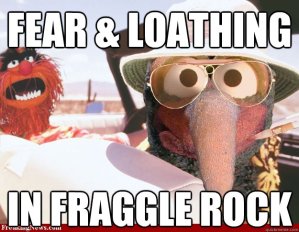 As Mr. Bean and his girlfriend are shopping for Christmas gifts, they walk by a jewellery store, where she drops hints that she’d like a ring. Of course, Mr. Bean completely gets the wrong message and thinks she wants the photo frame that sits nearby the jewellery. So, a frame and hook for that frame is what she receives, causing her to flee his apartment in tears. Mr. Bean does treat his stuffed bear better, though, replacing the button eyes Teddy was in need of.

Okay, the bratty Angelica ends up getting exactly what she wants for Christmas (a Deluxe Cynthia Beach House), even after she has been a total terror… but Santa might have left a little something to strike some fear in the girl’s black heart, when opening the house’s garage door reveals some coal residue. I guess she did try to remedy all of her bad behaviour upon warning from Grandpa Lou about what wicked kids can expect from Santa as far as gifts go.

Researching these TV articles was not an easy task and so if I’ve missed any of the worst gifts given in small screen history, please let me know. Merry Christmas, my little sippers!