Mrs. Sip and I feel we’re fairly entrenched in the craft beer scene and know what’s going on with new operations opening up and such. Imagine our surprise then, when we were planning what to do upon leaving our Cultus Lake campsite recently and discovered that Chaos & Solace Brewing had opened and we had absolutely no clue.

When we popped into the brewery, we shared a flight of the beers they had on tap, which for the Sip Advisor was highlighted by the Five Corners IPA. The beer has a typical alcohol content at 6% ABV, but is hoppy as heck at 85 IBUs. The beverage uses “a shwack” of local hops from Chilliwack Hop Farms in the recipe, thus jacking up its bitterness and flavours and aromas of citrus and fruit. 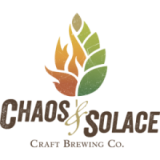 Not content to stop at just the Chilliwack hops, Cascade, Centennial and other west coast variations are also added to the concoction. As the company writes: “Love hops?  This is the beer for you!” The drink’s name, Five Corners, refers to the city’s downtown core, which received the name when established in the late 1800’s.

Chaos & Solace just opened a couple months back, but already have a solid lineup of beers available at their downtown Chilliwack tasting room. Unfortunately, a few of those items were already tapped out when Mrs. Sip and I visited, but that’s understandable for a new operation. We look forward to future developments.