As we continue our trek across Canada’s often frozen tundra, we discover another of the country’s greatest products: poutine. For those who are unfamiliar with the term, it basically means fries with gravy and cheese curds, but it can also be so much more. Let’s take a look at Canada’s cultural cuisine.

As with most things that earn a cult status and become famous, there are many that claim to have created the dish. A number of French Canadian cities also assert that they are the home of poutine’s invention. Drummondville, Saint-Jean-sur-Richelieu, Victoriaville, and Warwick each have ponies in this race.

It is commonly believed that poutine earned its name (which is French slang for “a mess”) when a trucker asked cook Fernand Lachance to add cheese curds to his fries in the 1950’s.

You can really make anything with the poutine base of fries and curds. Butter chicken, ribs, ground beef, pulled pork, and most other meats can be used in recipes. There are also Greek and Italian poutines which include Greek salad and gyro meat and Bolognese sauce and Italian sausage, respectively.

Chef Chuck Hughes even won an episode of Iron Chef America with an offering of lobster poutine, which sounds so amazingly fantastic. Not so fantastic (to the Sip Advisor, at least) are recipes which include foie gras, caviar, and truffles. I’d still give them a shot, though and probably end up eating crow.

Despite its wonderful taste, one major downside of poutine is its high-caloric value. Servings can range from 750-1,500 calories depending on how many ingredients are thrown on top of the base.

A number of fast food joints have also jumped aboard the literal gravy train. New York Fries, KFC, Burger King, Dairy Queen, A&W, Wendy’s, and even McDonald’s, known for their world famous skinny fries, have got in on the poutine act. A number of poutine specific restaurants have also began popping up across Canada. In a small area of downtown Vancouver, you can find La Belle Patate, Smoke’s Poutinerie, Mean Poutine, and others.

My favourite rendition of the meal is available at my local watering hole, Jimmy’s Taphouse. It’s not an elaborate serving of the delicacy, but what pushes it over the edge is the chipotle drizzle they put over the fries, giving it a bit of spice. The menu item is also on the bar’s half price happy hour menu, which makes it all the more amazing.

Jones Soda released a poutine-flavoured beverage for a limited time in 2013, which was met with mostly harsh reviews. Still, I wish I could track it down and use it in a drink recipe. If you have a bottle lying around, donations to The Sip Advisor are always accepted and like a church offering plate are strongly encouraged!

All this talk of poutine has worked up quite an appetite for me, so we’ll close with a note on perhaps the most famous moment for the popular dish. For Rick Mercer’s satirical ‘Talking to Americans’ segment on This Hour Has 22 Minutes, during the 2000 U.S. election, Mercer told George W. Bush that Prime Minister Jean Poutine had endorsed him. The actual Canadian PM at the time was Jean Chretien, but not a single interviewee picked up on the discrepancy. When President Bush made his first trip to Canada, he joked that he wanted to thank Mr. Poutine for the endorsement, finally clued in to the gag. 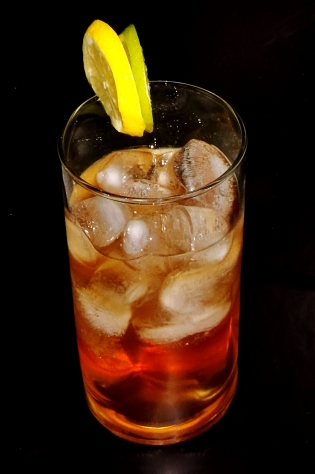 This is one of the few things we can thank the French for… that and an endless number of liquor options. Please share your favourite poutine recipe, fact, or story. Then go get yourself some of Canada’s finest gastronomic delight!

Sip Advisor Bar Notes (4 Sips out of 5):
Well, my little sippers, it happened again. I ended up with some Pineapple Juice that had gone bad and came out as clumpy as some poutine gravies. Luckily, I had some Pineapple Soda still lying around and it added a very nice touch to the drink. The always reliable (aren’t all Canadian items!) Crown Royal Whiskey tasted really good combined with the Chambord and Amaretto and everything mixed together made for an excellent cocktail.