In 2010 the world was captivated by the story of 33 Chilean miners who were trapped underground for an astonishing 69 days – kind of ironic given the title of today’s cocktail! – before being rescued. That’s three sets of digits I’ve thrown your way already and here’s some more, as we look at the Copiapó mining accident by the numbers:

August 5th – When the mine collapse first occurred, as a result of a cave-in. No souls were ever lost in my mashed potato mine cave-ins, but to this day, gravy is still cursed in the region.

15 Minutes – Duration of the claustrophobic ride to safety inside the rescue capsule… soon to be an attraction at Disneyland: Chile.

17 Days – When the first contact between rescuers and miners was made. The survivors had taped a note to a drill bit that was exploring the mine shaft, hoping to find signs of life. I’m a little surprised endorsement deals weren’t handed out by 3M or other companies claiming it was their tape that was used in the communication.

This was requested by two trapped Australian miners in 2006… whatever the Chilean miners asked for, they asked wrong!

18 Pounds – The average weight each man lost by the time the group was discovered still alive. All you little sippers out there should take note that this is a steadfast way to drop some pounds and get back into shape.

21 Inches – The size in diameter of the rescue capsule. Some might describe the shape of the pod as bullet-like, but others might come to a more phallic conclusion.

24 Hours – How long the entire rescue operation took to extract all the men who had been buried. That sounds about right, as it takes me about 24 hours to get myself out of any hot water with Mrs. Sip. 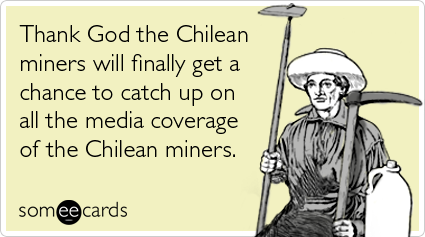 The 33 – Name of the feature film being made on the entire ordeal. It’s set to star Antonio Banderas and Martin Sheen. Jennifer Lopez was once attached to the project and despite no women being among the trapped, you can bet Lopez would have seen a fair bit of screen time (largely shot from behind!) in some sort of grieving role.

54 Years Old – The age of foreman Luis Urzúa, who is largely credited with leading the group of miners through their ordeal. He was the last man to be raised to the surface. Having a drink with this hombre would be quite the experience.

121 Years Old – The age of the Copiapó copper-gold mine, which lacked proper escape equipment such as ladders in the ventilation shafts and up-to-date maps. To be fair, all 121-year-olds operate without all the necessary faculties.

If it wasn’t 33 dudes trapped, I bet it wouldn’t have taken 69 days for a successful rescue!

540 Square Feet – The size of the emergency shelter the miners were forced to occupy. That’s smaller than my apartment and Mrs. Sip and I often get in each other’s way as just two people.

2,300 Feet – How deep the miners were trapped. That’s like Jules Verne’s Journey to the Center of the Earth, one of many books I never quite finished!

$20,000,000 – The cost of the entire rescue operation, which was paid for by private donations, the mine owners, and the government. That $20 million could have gone to funding this site with an endless supply and selection of booze.

October 13th – The rescue effort is deemed a success with the final miner emerging from their tomb. Now let’s drink to their achievement and well-being!

Aren’t numbers fun! I feel like the Count from Sesame Street right now… minus the accent, fangs, and cape. I do have the monocle however!

Sip Advisor Bar Notes (3.5 Sips out of 5):
This drink was a mix of sweet and sour thanks to the Riesling Wine/Simple Syrup and Pisco/Sour Mix, respectively. The Grape garnishes were a nice touch and I don’t get to play with them often enough.