As a last-minute addition/replacement to Mrs. Sip’s work outing to The Price is Right Live at the Abbotsford Centre, I spent an hour and a half in traffic, trying to make the show on time. My reward was a beer from the Vancouver Island Brewing booth at the arena.

How Vancouver Island became the beverage of choice all the way out in Abbotsford is a bit of a mystery, but I’m very glad that was the case. While my original choice was unfortunately already tapped out, that was for the best, as it provided an opportunity to order the Sea Dog Amber Ale. Mrs. Sip and I agreed that this was a great beer to enjoy as we watched classic games like Plinko, Cliffhanger, Any Number, and Punch-A-Bunch played out live. 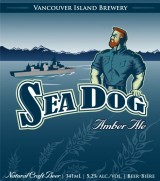 Available in six-packs and some versions of Vancouver Island’s Pod Pack variety case, this 5.2% ABV brew is a tribute to Victoria’s naval heritage and the centennial anniversary of the Canadian Navy. The beer is a little sweet with light hops, making for a well-balanced drink.

While in line for the beers, it was funny to note that Abbotsford locals were a little taken aback by the $6.50 price for beers. Meanwhile, Mrs. Sip and I were thrilled with that price, being used to paying double that when at Vancouver entertainment venues. To each their own, I suppose!