‘Tis the time of year that we bundle up indoors with a cup of hot chocolate and rewatch our favourite Christmas movies and TV specials. With that comes advertisements, where Santa has been used to sell everything from soda to snacks. Sure, we have Coca-Cola to thank for the modern image of jolly ol’ St. Nick, but other companies have done more to tarnish the legacy of Santa than build it up. Here are some of the most shameless uses of the yuletide icon:

Mrs. Sip and I just saw this Aleve ad the other day and while it seems harmless, the underlying message is concerning. To see Santa requiring medication to perform his annual duties should frighten every young tot in the world. It also takes away some of the big guy’s magic, thinking he suffers to bring joy to children all over the world. And what if Aleve is a gateway drug to more serious painkillers, causing Santa to have an opioid addiction and eventually need rehab to get his life and career back together. 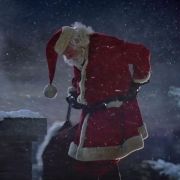 A number of companies have used Santa to market their smokes. I particularly like the one which shows Santa taking a break from his Christmas Eve activities to enjoy some smooth nicotine. This includes lighting up inside a family’s home, as he kicks back on a cozy chair, filling the dwelling with smoke. And here I thought he was more into milk and cookies… better leave a carton out for the gift-giver this year, ensuring years of good fortune and gifts.

Brands such as Crown Royal, Dewar’s, Martini, and Budweiser have all used Kris Kringle as a marketing figure to hawk their wares. The Byrrh company even released an ad in 1934 showing an very inebriated Santa – so drunk he can’t continue his epic yearly journey – taking five atop a home’s roof and drinking the wine-based aperitif. St. Nick is so blitzed that he even hallucinates an angel to share the liquor with, but she doesn’t look very impressed with Father Christmas. Maybe he’s sexually harassing her.

With all the gun violence around the world, particularly in the U.S., why shouldn’t Santa also protect himself? That’s what one Californian gun range figured, when a billboard popped up in the state in 2014, featuring Santa (accessorized with dark sunglasses, of course) with a menacing glare and proudly holding an assault rifle. The owner of the range stated: “I got guns from Santa Claus when I was growing up. Some people get toys and some people get firearms. It’s kind of just where you’re from.” Indeed…

Mixer Mania #45: All Warm And Fuzzy

What other examples of Santa Claus exploitation exist out there? Part of me wants to know and the other part would rather those examples stay hidden.

Sip Advisor Bar Notes (4 Sips out of 5):
This drink is very tasty. It is certainly boozy and that was with me halving each liquor measurement. The recipe originally called for Grand Marnier, which I had to substitute with Cointreau and Cognac. There’s a lot of flavours going on, but the end result is warmth and a little decadence!