Well, this is the last long weekend of the summer, which means it’s primetime for all the barbecue masters out there to whip up the delicacies we crave all winter long. While I’m pretty open to anything someone is kind enough to put on my plate, here are the Top 5 barbecue foods, according to the Sip Advisor:

Although Mrs. Sip and I only enjoyed this barbecued delicacy once, it’s a meal I will never forget… which is a little surprising because we were on a winery tour in the Barossa Valley of Australia and well on route to a drunken bender. The meat was prepared in red wine and was so tender and juicy that we went at the offering with a piranha-like frenzy. While I would usually never commit the faux pas of eating the last remaining piece, in this case, I even stabbed some poor dude with a fork to get it!

Corn is an essential ingredient for a good barbecue and thanks to these two serving options, can be enjoyed in different forms with equally pleasurable results. While the Sip Advisor hates getting food stuck in his teeth (the main reason he loathes popcorn), corn on the cob is one situation where that fear is thrown out the window. As for cornbread, you better lay your hands off my slice or it’s dueling time. Slap some butter on either of these side dishes and you’ll be in sweet-salty heaven.

My affinity for the potato chip has been discussed at length, but here we go again! I love my chippies and am practically addicted to the snack treat. Like a junkie, I start itching for that sweet release that comes with the first bite and the burst of flavour that will soon fill the void in my soul. Chips are an easy side for any meal, but work best when you have a big ol’ bowl of them on display for the Sip Advisor to steal, hide in some dark, dank corner and inject straight to the veins. 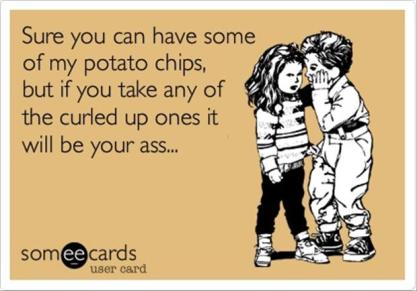 There’s nothing like smacking a glob of pulled pork down onto a fresh bun, topping it with some slaw and taking a mammoth bite out of the wicked sandwich. Preferably, you next move will be to wash down that food with an ice cold brewski, thus completing two-thirds of the holy trinity. All that’s left is to take a brief cat nap and repeat the process again. God bless the pig for all the awesomeness it provides.

Is there anything that smells better in this world than a barbecue grilling up hot dogs? Other meats are all well and good, too, but for my money, nothing tops some smokies! Hot dogs are so amazing that they can become the icing on the cake or the cherry on the sundae, even when purchased on the street in the wee hours of the morning after getting blitzed all night long. Somebody better get the grill going because I’m ready for a feast fit for a Sip Advisor! 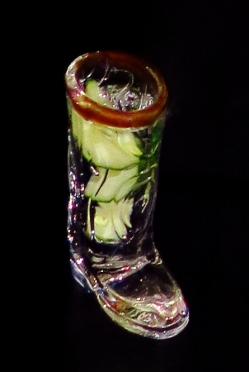 I have to throw a massive shout out and honourable mention to potato and noodle salads. Without these two brothers in mayonnaise, I don’t know how I would have survived barbecues as a little sipper picky eater!

Sip Advisor Bar Notes (2 Sips out of 5):
This could be the world’s next great punishment shot, even though on their own, in various cocktails, the alcohols are quite nice. Speaking of the alcohol, Mrs. Sip and I recently stumbled upon this entry in the Absolut City Series, which combines Cucumber and Serrano Chili Peppers… a perfect summer blend. The Cucumber Slices were a nice touch visually, but were a choking hazard during the actual shooter.

Recently, the makers of Mountain Dew began a new promotion where the company released four new flavours of its pop, asking customers to decide which was the best and the winner would stick around. I picked up a mixed pack of the new releases and decided to do my own little taste test, cocktail style. So, I present to all you little sippers, the first in a four-part series of comparing sodas, while also looking at liquors I would love to try… talk about harmony and synchronicity!

How do you bottle the essence of a city? Well, Absolut Vodka seems to think they’ve found the perfect blend to describe major hubs around the world, such as Los Angeles and New Orleans, in their Cities series. The LA bottle, for example, features blueberry, acai berry, acerola cherry, and pomegranate, a nod to the city’s healthy lifestyle, while N’Orleans brings together an interesting blend of mango and black pepper. At least the flavours don’t taste like race riots and broken levees. 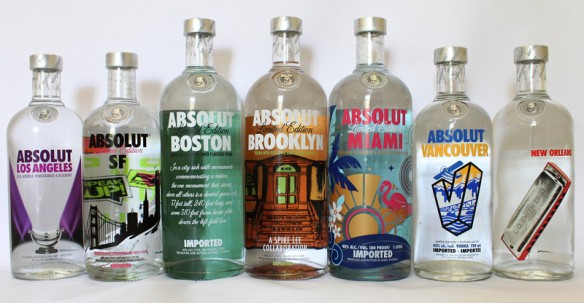 Cool! Even my hometown of Vancouver has been bestowed a vodka in its own name… the first Canadian city to earn such an honour. Take that, Toronto!!!

It is a well-documented fact that the Irish love to drink… and for that reason alone, we love them. I’m pretty sure the small segment of Irish in me is the reason I run this site and enjoy the caress of sweet lady liquor so much. This liqueur is advertised as a blending of Irish spirits (not ghosts, whiskey of course) and cognac, with a taste of honey. It may only be available in Ireland, but with popularity, the drink will surely make the Celtic Crossing, as well.

I feel like this spirit would be best enjoyed while watching Game of Thrones and cheering on Daenerys Targaryen. What exactly is a dragon berry, you ask? Well, it comes from exotic dragon fruit, of course. This Bacardi offering combines strawberry with the dragon fruit for a bold flavour that is unmatched by any other liquor. This bottle should be easier to track down than most others thanks to Bacardi’s wide distribution of it.

This may turn out to be completely disgusting, but I think if given the chance, you’d have to see what it tasted like. Fresh cut grass definitely smells good and is a welcomed sign that summer is here, but how exactly would it taste as a vodka? Along with notes of grass, drinkers have found tastes like honeydew melon, strawberry, kiwi, and aloe while sipping the alcohol. I wonder if it’s all blended together via lawnmower!?

This South African liqueur is made from Cape tangerines, brandy, plants, seeds and barks. I’m intrigued by it simply because it’s from South Africa (at the top of Mrs. Sip’s current travel wish list) and I need to have a souvenir to look out for when I’m dragged there with her. Hopefully I can get one drink of the sweet stuff in before any number of wild animals gets to me. If I don’t have a rhino or elephant charge at me, I’ll consider it a disappointing vacation!

Join the Sip Advisor tomorrow for another new Mountain Dew flavour and the continuation of liquors I want to try. Perhaps we can go halfsies on a bottle, in the name of friendship, discovery, and getting stupid drunk!

Sip Advisor Bar Notes (2.5 Sips out of 5):
This was another one of those cocktails that tasted better after the ice got a hold of the mix and diluted it a bit. The Strawberry Slices I scattered throughout the cocktail also helped with flavouring. I’m not sure what exactly was off with the drink, but something was up.
As for the Code Red on its own, it’s much better than in its cocktail form. There is a strawberry taste to the soda, so at least I got that guessing game right. I think the mixer would be better in a drink involving citrus flavours.