The Sip Advisor began his wicked ways, many moons ago, with the enjoyment of root beer. It could be described as the gateway libation that led to this endeavor and made me the booze jockey I am today. Let’s dig a little deeper and take a look at some of the companies that brought this beautiful drink to our lips:

Created in 1876 by Charles Hires, a pharmacist from Philadelphia, Hires Root Beer has the longest history of all American soft drinks. That includes Coca-Cola! Hires’ root beer business began with selling 25-cent packets of powder that would produce five gallons of the drink. I wish that deal was still available to the Sip Advisor! Hires ran into some issues early on thanks to calling his soda “beer” (in order to entice blue collar folks). The Temperance Movement looked to eliminate the pop, but Hires proved there was little to no alcohol content and even went so far as to mock the movement, calling his root beer “The Temperance Drink”. 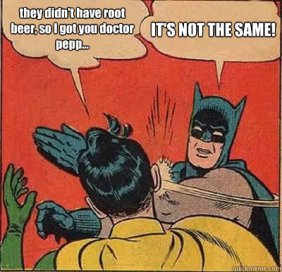 I`m a Dr. Pepper fan, but I would certainly never argue with the Caped Crusader!

When Roy Allen joined forces with Frank Wright to open the A&W restaurant chain (one of the first dining chains in the U.S.) in 1922, they had no clue how successful their endeavour would prove to be. A feature of the fast food outlet was their root beer, which originally sold for 5-cents per serving. Allen had previously operated roadside root beer stands in parts of California. The Great Root Bear has been the company’s mascot since 1974 and was first used in Canada. Nicknamed Rooty, the bear has largely been replaced by the A&W Burger Family, but he still pops up from time to time, usually with a fresh mug of root beer close by.

Officially known as Barq’s Famous Olde Tyme Root Beer, up until 2012, Barq’s has existed since 1898. I remember the brand becoming quite famous in the 1990’s upon the release of their “Barq’s has bite!” ad campaign (featuring comedian Nick Swardson). Anything was better than the company’s original slogan of “Drink Barq’s. It’s Good.” The soda was created by the Barq’s brothers, Edward and Gaston, who began experimenting with beverages in the French Quarter of New Orleans. Barq’s is rare in the root beer world, in that it contains caffeine, while most similar products don’t. That means that it certainly does pack a bite. 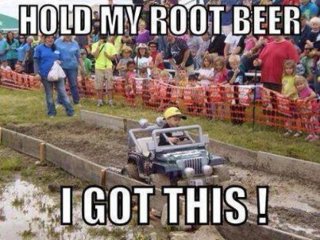 Beginning as Belfast Root Beer, brewed out of San Francisco in the 1940s, the company eventually changed the product’s name to Mug Old Fashioned Root Beer. As is common with most root beer ventures, a Cream Soda variation was also released, but is less common to find. Mug was acquired by PepsiCo in 1986, joining their long lineup of beverage options. Mug’s mascot is a bulldog named Dog (how very creative!), whose adventures are featured in an online comic on the brand’s website. I don’t know about all you little sippers, but I don’t mind sharing my drinking experiences with a cute pooch!

The Dad’s brand name is derived in honour of all the fathers out there that used to brew their own root beer for their families, back in the day. Dad’s was an innovative line, being the first beverage to take advantage of the six pack format and half-gallon bottle options. Like A&W burgers, Dad’s Root Beer also follows a family-style orientation with ‘Papa’, ‘Mama’, and ‘Junior’ products. A popular marketing tactic used by the company in the 1940’s was to sell the quart-sized Mama for only 1-cent, with the purchase of a half-gallon Papa. Dad’s ads appeared in the 1946 movie The Stranger, directed by and starring Orson Welles. 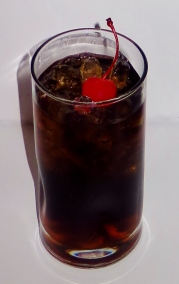 If I had to pick a favourite root beer, amongst the fine choices above, I think I’d have to go with A&W. They get the nod because I can easily combine their soda with delicious burgers and scrumptious fries. Plus, you can never take anything away from a frosted mug, which the restaurant is happy to fill for you!

Sip Advisor Bar Notes (4 Sips out of 5):
I knew from the moment I found this recipe, that it would be a good one. Sure, Peppermint Schnapps is an odd addition to the mix of Root Beer Schnapps and Dr. Pepper, but it all came out okay in the wash. There was a brief hint of peppermint flavour, but it’s very light and doesn’t ruin the other soda tastes.