The Vikings have a badass reputation and frankly, it’s well deserved. Many of these figures, hailing from Scandinavia and particularly Norway, have rap sheets that would make a writer for Game of Thrones light up, as it opens new doors to wrath and associated violence. Let’s take a look at the exploits of some of the greatest Vikings:

Erik the Red’s early life was built around repeatedly being exiled after committing murder. Therefore, he created his own Viking colony on what is now Greenland, which he also discovered. There, Erik the Red was free to do whatever he wanted. Although bloodshed is largely associated with Erik, his nickname ‘The Red’ more likely referred to his hair and beard. He was father to other Viking notables, explorer Leif Eriksson and warrior princess (not Xena) Freydis Eriksdottir. 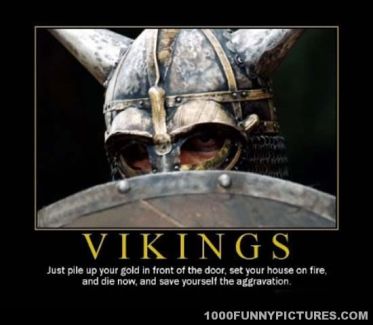 In order to prove he was a badass to a princess, Lodbrok demolished a horde of invading poisonous snakes. Karma caught up to him eventually, though, as he was executed by being thrown into a pit of serpents. Although Lodbrok’s actual existence has been questioned, he was said to be father to other legendary Vikings, including Björn Ironside, Halfdan Ragnarsson, Sigurd Snake-in-the-Eye, and Ivar Ragnarsson.

Speaking of the devil, Ivar was a ruthless warrior who used captured kings as playthings, expending them for target practice and other horrific executions. Ivar’s nickname, ‘The Boneless,’ was thought to refer to anything from an ailment causing his bones to break easily, to being impotent, to being incredibly flexible. Regardless, Ivar ruled parts of what is now Denmark and Sweden, as well as Dublin.

Eriksson is most notable for discovering North America (500 years before Christopher Columbus), although the finding was likely accidental. He had meant to return to Norway, but his ship was blown off course towards modern day Canada. Eriksson was more of an explorer and not a Viking in the classic raid and pillage sense. He was said to be quite intelligent, while also possessing the strong frame of a typical Viking. The U.S. even celebrates Leif Eriksson Day every October 9th!

Eric had a thirst for blood and power, even killing his own brothers to become King of Norway. This earned him the moniker, Eric Bloodaxe. His reign over the Norwegian kingdom was short-lived, however, as one remaining broski returned and overthrew Eric, who had angered many of the nobility with his ruling tactics. Eric turned his attention to Northumbria and became king there, before dying in battle.

Forkbeard first came to prominence by going to war with his own father and emerging as the King of Denmark, upon being victorious. Following that, it seemed he held a major grudge against England, attacking them repeatedly over the rest of his life and even ruling the realm for a time. His anger towards England was thought to be based on his sister dying during the kingdom’s massacre of Danish citizens. Forkbeard also invaded Norway and divided up the country with his allies.

While exiled from Norway, Hardrada became leader of the Byzantine emperor’s Varangian Guard. When he returned to Norway, he fought to become king. Hardrada means “Hard Ruler,” a name he received for his constant wars and harsh reign. Hardrada believed he had a claim to the throne of England, upon the death of that king, and died in battle, after being shot in the throat with an arrow, trying to make good on his perceived right.

Skallagrimsson was both a warrior and a poet, covering every aspect that makes a lady swoon (not to mention the namesake of an Icelandic brewery!). He is said to have written his first works at the young age of three, but also killed for the first time at seven years old. When the Norwegian king grew tired of Skallagrimsson’s exploits, he was exiled and began his years of terror, amassing a fortune and high kill count. He even murdered the slave who helped him bury his treasure.

I wonder what my Viking nickname would have been. I’m thinking Word Whisperer sounds alright, but I’d hope my contemporaries would incorporate my legendary boozing into the moniker and call me something like Liquor Leviathan!

Sip Advisor Bar Notes (5 Sips out of 5):
Cloudberry Liqueur is made from berries found in Norway. This is quite the complex recipe, but it is totally worth the intricate construction. I think the cocktail name is quite funny in contrast to the article it’s combined with… kitten cuddlers and raiding and pillaging Vikings don’t really go hand-in-hand. I topped this cocktail with my Bols Banana Liqueur foam and it was a perfect touch to the drink.

There are some very interesting Christmas rituals performed around the world. Some are truly baffling to me, but if I lived in the part of the planet where they occur, they might seem completely normal. I’m not here to judge… but I will anyway! Here are some of the most unique holidays customs:

This is a tradition that Ma Sip picked up from when we were on holiday years ago in Leavenworth, Washington. How it works is that you bury a pickle ornament somewhere in your tree and the person who first finds it Christmas morning is rewarded with good luck (and sometimes gets to crack open the first present of the day!) for the following year. The custom has been attributed to Germany, but is actually unheard of to many Germans. In actuality, it’s said to have developed in the United States. 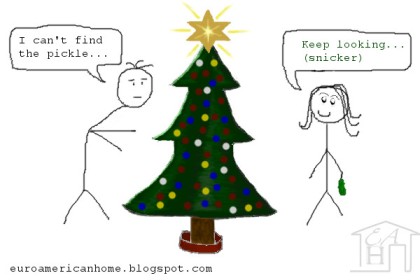 I love skating and it doesn’t matter if it’s on ice or pavement, so this tradition is right up my alley. On the morning of Christmas Eve, the streets on Venezuela’s capital city are closed off, allowing citizens to skate to morning mass. There is, however, one snag in this ritual… you have to go to church, which I view as one of the most uncomfortable settings in the entire world. I suppose I could just join the mob for a little skate and then ditch them when it’s religion time!

It’s tradition in this Swedish town to construct a massive straw goat at the start of the Christmas season… but it’s even more of a tradition for the townspeople to do everything they can to destroy the goat before Christmas Day. Since 1966, the goat hasn’t survived many times, despite it being protected by fences and guarded by security and even military. The goat has been destroyed through various acts (fire, sabotage, hit by car) and once only lasted six hours before two drunk teenagers torched it.

So, apparently the Ukraine got Christmas and Halloween mixed up, because it is tradition for them to include a fake spider and webbing in their Christmas trees. Spiders are good luck, you see… shame on all of you out there that didn’t already know that. Think of all the arachnids you’ve killed over your lifetime. That’s like smashing a mirror to a Ukrainian folk. Mrs. Sip has some Ukrainian in her, but given her fear of spiders – even itty, bitty ones – I don’t think she’s going to adopt this custom. 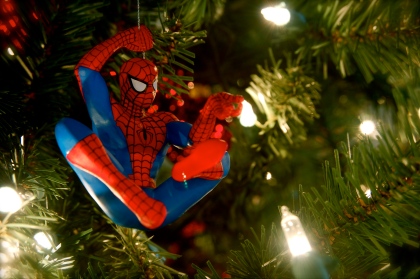 Well, this certainly wouldn’t qualify as organic. In Oaxaca, residents grow massive radishes by any means necessary, for the purpose of carving them up into sculptures depicting the nativity scene, parties, famous figures, building models, and saints. Not being a fan of radishes, I’m all for an event that doesn’t require their consumption. The Dec. 23 ‘Night of the Radishes‘ is attended by thousands of people. The winner of the competition gets their photo in the newspaper and a lifetime supply of radishes (okay, only the newspaper photo is true!).

While us westerners are opening presents and spending quality time with family, in Japan, the holiday is treated similar to our Valentine’s Day. A Christmas dessert of strawberry sponge cake is quite popular, except single women of 25 years or older are referred to as “unsold Christmas cake”. It should also be noted that red Christmas cards are a definite no-no in the Land of the Rising Sun, as funeral notices are printed in that hue and can be cause for bad luck and shows poor etiquette.

I’ve already touched on Santa’s Canadian address (postal code H0 H0 H0) in my look at Christmas urban legends, and apparently we’re not alone with giving St. Nick free housing. In New Zealand he can be found at ‘Santa’s Workshop, The North Pole 0001’, while Australian children can reach him at ‘North Pole 9999’. Lastly, the United kingdom has provided the jolly fat man with the post code ‘SAN TA1’. This brings much awesomeness to the commonwealth!

In closing, here’s one last interest custom that varies throughout the world and that involves Santa’s mode of transportation. Us normal folk claim that he rides a sleigh from house to house on Christmas Eve, but that story is quite different in other locales, where he is believe to travel via kangaroo (Australia), canoe (Hawaii), horse (Netherlands), and finally and most awesomely, by zipline from heaven (Czech Republic)!

Sip Advisor Bar Notes (3 Sips out of 5):
For this recipe, you have your choice of using Strawberry or Raspberry Liqueur. The champagne cocktail came across much stronger than I expected. The flavour was decent, but I’m still not a huge bubbly fan and as a result, there just wasn’t enough to bump this drink’s score up higher.