After stops in London and Sicily to start our European vacation, we made our way to Malta for the final leg of the getaway. Promptly upon arriving in the country, we collected our rental vehicles and drove to the ferry, transporting ourselves to the sub-island of Gozo. After boarding the ferry, Mrs. Sip retrieved a can of Hopleaf Pale Ale for me, as I waited with a sleeping Baby Sip.

For dinner that evening, we went to the Zebbug Rovers Bar & Grill. Here, I enjoyed the Zebbug Rovers Special pizza (topped with chicken, bacon, ground beef, pepperoni, sausage and BBQ sauce drizzle) with a large serving of Paulaner Weissbier.

The next day, after checking out some of the sites around Gozo, we stopped for lunch at the seaside Churchill Restaurant. For our meal, I enjoyed a Grilled Angus Burger, along with a glass of House Rose. Afterwards, upon being challenged, I performed a near-perfect cannonball into the adjacent Xlendi Bay! 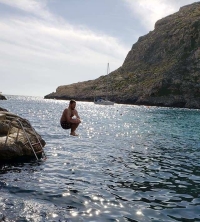 Our big stop the following afternoon was a visit to Lord Chambray Brewery. Thanks to a group effort, we all got to try everything they had on tap, with my pint selection being the Sun Blas English IPA. Other favourites included the Fungus Rock Stout and Blue Lagoon Belgian Wheat.

That evening, we managed to finally get our hands on the final two episodes of Game of Thrones – as well as a TV we could view them on – and sat back to enjoy the spectacle. My enjoyment was enhanced by the addition of beers such as the 8.6 Original Intense Blonde Beer, which I became a big fan of during the Maltese portion of our trip.

The next day, we were off to the main island of Malta, staying in the marina area. On our first night, we had a late dinner at the nearby Mamma Mia, known for their Chicken Dippers meal, which was very, very good and really hit the spot after another long day of driving and sightseeing. A pitcher of Cisk Lager was a nice, if not underwhelming, accompaniment to the feast. 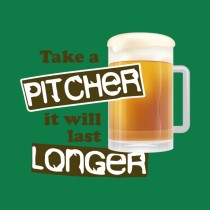 Our next attraction was the walled city of Mdina, where we had lunch at the Palazzo de Piro Café. My Clubhouse Sandwich was unique in that it included boiled egg, but that didn’t detract from the meal. We also split a bottle of Medina Sauvignon Blanc to wash down our food.

Next up, was a visit to Meridiana Winery, where for 12 Euros, we received a four-glass tasting, including the vineyard’s Isis Chardonnay, Fenici Rose, Nexus Merlot, Melqart Cabernet Sauvignon & Merlot. With a bottle of the rose coming home with us, we can recreate the serene experience anytime we want.

To celebrate the return of our rental cars and no longer having to drive, we had another late dinner at Uncle Matt’s Kitchen. There, I had another meaty pizza with the Chicken Farm option. A tall can of Blue Label Amber Ale and glass of house rose completed the feast. 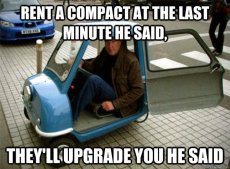 We next explored Valletta, the capital of Malta. Our day of exploring ended with drinks at the 200-year-old Caffe Cordina, where I drank a bottle of Farsons Double Red Ale. Baby Sip liked the stop, as she got to chase birds in the small square, as well as receive numerous packs of cookies from the servers.

On our last day, we bought tickets for Malta’s hop-on, hop-off bus. Our main stop was the Marsaxlokk Fishing Village, where we explored and dined at Carrubia, along the waterfront. Mrs. Sip and I weren’t very hungry, but shared a really good breaded cod and chips plate. The restaurant also offered free bruschetta for the table. A bottle of Green Label Delicata made the picturesque spot a perfect ending to the journey.

As mentioned earlier, Alaska is up next, a cruise I’ve been wanting to do for some time. I’m hoping to get some breweries in while there and the typical cruise ship shenanigans are bound to occur. I’ve made it my goal to hit at least one saloon in each port, so that should make things interesting!