The final week of 2017 offered extra time with family and friends and that led the Sip Family to doing what we do best: eat and drink and be merry! Here what we got up to while closing out the year:

After getting out of work early on Friday, I met the Sip Syndicate fellas for some celebratory drinks at The Railway Stage & Beer Café (a Vancouver landmark that has recently reopened under Donnelly Group ownership). I had never visited the original Railway Club, so can’t compare the two. I had a really good time during this drinking session, featuring six different craft beers available during happy hour for only $3. I had originally thought of drinking one of each, but opted to stick with what I liked. This included the Phillips 6IX IPA, Driftwood Fat Tug IPA and Parallel 49 Wobbly Pop Pale Ale. Outside the happy hour menu, I also selected the Postmark Winter Warmer, which I had wanted to try since gifting it as part of a Secret Santa package. To finish the outing, we ended up with a glass of Scotch, before venturing out into the Vancouver rain again.

The next night, we made our way to Coquitlam to visit a friend who had recently bought a place out there. After checking out her new abode, we went for dinner at Boston Pizza. There, I ordered the Southwest Flatbread (BBQ Chicken, Mozzarella, Bacon, Red Onions, Ranch Drizzle), which was delicious. It had been a while since we had a meal at BP, so it was nice to give it a go again.

We followed dinner with a trip to Mariner Brewing (brewery #5 for Baby Sip!). When I first visited their location in the summer, it was only a few days old and their beer lineup has grown impressively. Mrs. Sip and I split a flight of brews, which included their Berliner Weisse, Margarita Ale, Tropical Milkshake IPA, and Night Sky Mocha Stout. The latter three were all new to me, with the IPA being particularly tasty.

For New Year’s Eve, we were set to host a bigger party at Ma and Pa Sip’s place, but a number of people bailed on the plan, which seems to be a New Year’s tradition for some. I find the night to be very anticlimactic, with so many plans falling through and people being flaky. We still made it memorable, as it was Baby Sip’s first and stuck to our ‘Treat Yo Self’ theme by consuming massive quantities of food and liquor. To ring in 2018, Mrs. Sip and I brought our bottle of Viniq Shimmery Liqueur (the orange one) to mix with bubbly, which ended up tasting like a Bellini. We also split a bottle of Unibroue’s 25th Anniversary limited edition release, which tasted like a Black Forest Cake. It was so very good and what made it special was it was the last bottle available at the liquor store when Mrs. Sip spotted it. 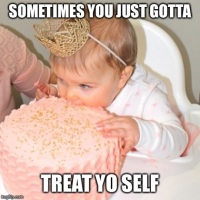 The Sip Advisor is spending the next month doing ‘No Junk Food January’ to aid in getting back in shape after a too long hiatus from the gym, following Baby Sip’s birth. It will not be easy, but I’ll be helped along by keeping booze part of my life. With a friend’s wedding approaching and a beer advent calendar to work through, there’s no way I could completely abandon my old friend!