As today’s featured mixer is the Lester’s Fixins Bacon Soda, I just can’t get the pork product out of my mind. That got me thinking about all the great fictional pigs out there. Here are some of those swine:

Porky Pig has been stuttering his way into our hearts since 1935. Although Porky can sometimes be pushed to the limits of sanity (by the likes of Bugs Bunny and Daffy Duck), he’s generally a jovial fellow. We’ll always remember him for his trademark catchphrase: “That’s all folks!”

If Porky Pig is the king of the sty, then Miss Piggy would be his queen. I’d actually like to see a crossover project of that nature, although you’d have to imagine Miss Piggy would only be using Porky to make long-time beau Kermit the Frog jealous.

This little porker was so talented, it was considered for a Best Actor Oscar… only the character was played by countless animals, so it was hard to nominate one sole “actor”. Still, folks fell in love with Babe, leading to a sequel that earned high praise from both Gene Siskel and Roger Ebert.

Following in the footsteps of Porky Pig is a daunting task, but at least at Acme Looniversity, Hamton has the opportunity to learn from the master, himself. Much like Porky, Hamton is often at the mercy of his partners, such as Plucky Duck.

A figment from the imagination of former US vice-president Al Gore, ManBearPig was something to be feared. Of course, during the Imaginationland saga, ManBearPig comes to life and is every bit as terrible as Mr. Gore always claimed it would be. 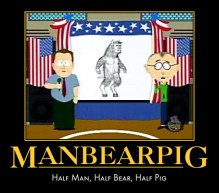 While Piglet is among my least favourite Winnie the Pooh characters, the loyal friendship he provides to the loveable honey-obsessed bear is truly touching. Piglet even got his own feature film, which featured Pooh and pals searching for the little alarmist.

Warthog Pumbaa, along with meerkat Timon, seemingly help young lion Simba mature from cat to king of the jungle through the course of one song. These sidekicks to the future ruler of the Pridelands proved so popular that they received their own cartoon series and film.

Ganon – The Legend of Zelda

Before he was changed to a human, the evil sorcerer Ganon was originally a pig-like being and a thorn in the side of Hyrulians everywhere. His tireless pursuit of the Triforce – for the purpose of malicious intent and Hyrule domination – has led to many adventures for our hero Link.

Sticking with pig-like baddies, this mutant warthog is a constant pain for the TMNT crew to deal with. Although, along with fellow thug Rocksteady, he’s mostly a bumbling temporary distraction, Bebop has been known to do some degree of damage, along the way.

The antagonists of the Angry Birds franchise have proven so popular that they even got their own game: Bad Piggies. Sure, they are evil and have stolen bird eggs for consumption – plus the pigs surly snicker when you fail a level is infuriating – but there’s something endearing about these villains.

Pigs may perhaps be the best tasting animal out there, but you wouldn’t want to eat those previous little piggies.

Sip Advisor Bar Notes (3 Sips out of 5):
Much like with my efforts to find a cocktail recipe for the Peanut Butter & Jelly Soda, this was not an easy task. I went with this idea and altered it as needed. The drink was highlighted by the Jack Daniel’s Honey Whiskey and the Bacon Bit Rim. That said, the Bacon Soda was a decent contributor, as well.