Mrs. Sip spent a lot of her youth in Hawaii and she has been able to share some of those experiences with me, since we’ve been together. With Hawaiian Punch being today’s feature mixer, let’s take a look at some of the things the islands have brought to our lives:

One of the most fascinating parts of a vacation to Hawaii is taking in all the unique culture. From being greeted with leis to luau feasts to hula dancing and everything in between, the island experience is something that must be seen to be appreciated.

Despite its name, Hawaiian Punch was actually developed in California in 1934. Originally an ice cream topping, it became a beverage when water was added. POG, however, can claim Hawaiian ties, as it was developed in 1971 for Haleakala Dairy on Maui. The islands are also famous for Kona coffee, which must be grown in that district. Hawaii is the only American state which grows coffee plants.

Hawaiian food can be looked at, in this humble writer’s opinion, as the good, the bad, and the ugly. First, there’s the delicious Macadamia Nuts, which are a souvenir every traveller brings back with them. Next up, we have the polarizing pineapple, which I like on my pizza, but don’t like in my cocktails. Then, we enter dangerous territory, with items like poi and spam, which are certainly acquired tasted. We can’t forget one of Mrs. Sip’s favourites: McDonald’s Haupia Pie!

The most famous Hawaiian is probably former president Barack Obama, while the islands are also the birthplace of musicians such as Bruno Mars, Jack Johnson, Don Ho, and even Bette Midler. Let’s not forget Aquaman himself, Jason Momoa, also calls Hawaii – and its waters – home.

Some of my favourite TV shows and movies were filmed amongst the beautiful setting that is Hawaii. These projects include Magnum P.I., Hawaii 5-0 (I’m more a fan of the original), and one of Ma and Pa Sip’s favourites, Lost, on the TV side. As for films, Forgetting Sarah Marshall, 50 First Dates, The Descendants, and Lilo & Stitch have used the island backdrop to their advantage.

Hawaii can be credited with being the birthplace of many other notable things. Some of these include ABC Stores, which can be found all across the islands; the Shaka (aka Hang Loose); the POG game; and likely also played a role in the popularity of surfing, although that can be spread across much of the Polynesian islands. 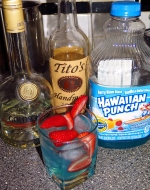 Sip Advisor Bar Notes (3.5 Sips out of 5):
Of course, this recipe is meant for the original Hawaiian Punch, but I’m going with the Berry Blue Blast version. The drink called for Everclear as a liquor, but Vodka is a quick and sufficient substitute. The taste is dominated by the cinnamon flavour in the Goldschlager, with some berry coming out, but being largely hidden.