Where is my Mind?

Blueberries are said to help greatly in maintaining cognitive functioning and fighting off memory loss – so long as you enjoy a serving of them once per week – as the berries clear toxins that gather in the brain. Clearly, the entertainment industry is unaware of these developments because it is rife with stories of amnesiacs. Here are some of the most notable memory loss cases:

If a case of amnesia resulted in the Sip Advisor being able to instinctively fight secret agent style and have a highly-functioning mind, I’d say it would all be worth it… I know Mrs. Sip would appreciate the change in brain activity! Jason Bourne awakens one day and can’t remember who he is, but he can certainly kick ass and that keeps him alive through three (soon to be four) films.

Although suffering from short-term memory loss, Leonard is still working to solve the murder of his wife. To remember the clues he’s put together, Leonard uses Polaroid photos and self-inflicted tattoos as reminders. I should do the same on binge nights! This psychological crime thriller is told in reverse order, which only adds to the building mystery.

Following the procedure which gave him his trademark adamantium bone structure, Logan struggles to remember his past (in the origins movie, an adamantium bullet to the noggin also helps) and it takes the mind reading power of Professor X to make any headway into the mutant’s psyche. We all have events we’d like to block from our memory, but I’d rather have a mix of good and bad than none at all.

Can you imagine having to remind your partner each and every day about your shared past together? Thankfully, Mrs. Sip only has to do this for me after a hard drinking night. In this case, perhaps it was working with Adam Sandler again that drove Drew Barrymore to memory loss. Anyhoo, Lucy is helped along by Sandler’s Henry to break the pattern and live a happily ever after, each new day. 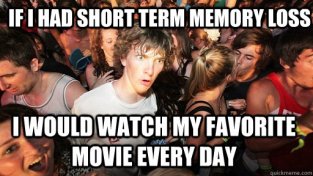 This one is a little different, in that main characters Joel and Clementine choose to wipe their minds clear of any memories to do with each other after their relationship goes awry. Regardless of this, they wind up together again, as if their love was always meant to be. Jim Carrey must be the king of playing amnesiacs, having also tackled the role in The Majestic and The Number 23.

Played for comedic effect, Dory is one of the many characters father Marlin comes across in his search for his son Nemo. Dory proved to be such a popular character that the pacific regal blue tang (thanks to Wikipedia for that!) will be getting her own movie, Finding Dory, due out in 2016. Ironically, the movie will be centered on Dory getting her memories back, leading to another adventure. 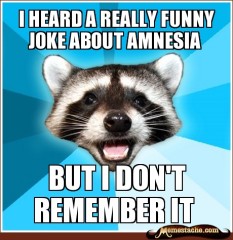 The Wolfpack – The Hangover

The one thing worse than one person not being able to remember what happened before, is three friends blanking out on the previous night’s activities. Thanks to being slipped roofies, the Wolfpack can’t figure out what trouble they got up to and worst of all, their buddy Doug is missing and his wedding day is coming up quickly.

Mrs. Sip and I love to travel, but I’m not sure we’d be into futuristic travel methods which include having images placed in your mind, while you sit in a chair. Of course, an innocent visual journey to the planet Mars, helps Quaid realize that he’s actually a secret agent operative, with crazy fighting skills. Quaid (aka Carl Hauser) now has to go to the real Mars, to figure out why his memory was wiped.

Soap Operas are also a prime breeding ground for cases of amnesia, either occurring after a death, or leading to a murder most foul!