It’s funny how much narration can add to the overall effect of a TV show or movie. That’s why over the next two weeks, we will salute the voices behind our favourite entertainment. This week, we’ll start with TV land, while next week, we move to the big screen. Let’s get things rolling!

Voiced by Danny Tanner… er, I mean Bob Saget, the audience joins Ted Mosby’s two children as we learn the nine-season long story of how Ted met their mother. I can’t help but think that most story tellers would have cut straight to the chase, especially with the rash of ADD-afflicted teens known to exist nowadays. Through Saget, we join Ted and the gang for all of their triumphs, heartbreaks, and adventures in the Big Apple. 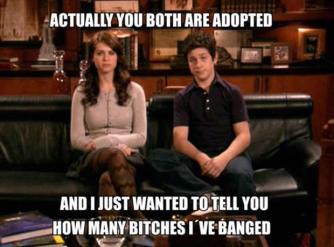 Mrs. Sip and I have just recently got into this show and are really enjoying it. One of the best elements is the narration provided by my boy Patton Oswalt, as a young Adam Goldberg traverses the awesome decade that was the 1980s! As a child of the 80’s, I can appreciate many elements of this show, including Adam’s passion for the Nintendo Entertainment System and Transformers. All along, we have Oswalt guiding us with the same childlike joy and enthusiasm as the boy he’s doing an adult version of.

Through Dexter’s narrations, we learn what’s going on in his troubled mind. We also get to see the side of Dexter he rarely reveals to the outside world. While he gives the impression that he’s kind of robotic, his inside voice tells us that he’s actually got a sense of humour and can even care for the people around him. Some of the best laughs from the series come straight from the mind of our serial killer of serial killers, as he makes quips about the victims he’s hunting and the authorities he’s eluding. 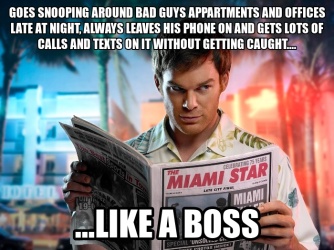 From the mind of Ron Howard (almost literally, as he delivers a perfect narration), comes the wacky antics of the Bluth family. With a growing number of characters, as the story progresses, Howard keeps us updated with each development and even manages to add in his own comedy from time to time. Howard even factors into the series, doing double duty, playing himself at some points. The former Opie of The Andy Griffith Show did well for himself and survived the transition from being a child actor.

Voiced by Daniel Stern of Wet Bandits (Home Alone) fame, this voice guided us through the turbulent 1960’s and 70’s, as Kevin Arnold came of age. From teenage love to surviving high school, we saw – and heard – it all. Although I haven’t seen it in years, I can still recall many of the bombs dropped in the final narration of the series, including the fact that Kevin and Winnie didn’t have a true happily ever after and that Jack Arnold, Kevin’s dad, only lived a couple more years, before passing away.

If I could choose anyone to narrator my life’s story, it just might be the Dos Equis Man! Next week, we move to feature films, where narrators are essential to some stories. Which movies will crack the Top 5? You’ll just have to tune in to find out…