You would think that with a big trip approaching for Mrs. Sip and myself that this week would be calm on the drinking front and more focused on last-minute errands and packing. But you don’t know Mrs. Sip and I. No, instead, we tried to balance both ideas, visiting with friends and family and celebrating a couple birthdays along the way.

The week began with a trip to Bin 941, which specializes in shared “tapatizers”. Cousin Sip had grabbed a Groupon for the meal, which included eight beers or two bottles of wine, with the selection of six different appetizers. We decided to go the beer route and I picked one round of Mad & Noisy IPA, followed by Granville Island ISA. I’d never heard of Mad & Noisy before, but apparently they are an offshoot of the Molson Brewery. Among our appies were their mountain of truffle fries, crab cakes, fried octopus, lamb skewers, and bread and dips. Some of the dishes were smaller than I would have hoped for, especially with sharing amongst a group of four, but everything tasted pretty damn good.

The next night, we were back at the Central City Brewpub on Beatty Street (wow, we’ve been there a lot lately). This time, it was to celebrate Sis-in-Law Sip’s birthday with the restaurant’s monthly feature Bacon Tasting Menu. This was comprised of a salad (with beer bacon lardon), main (double smoked deep fried bacon steak), and finished with dessert (maple bacon blondie). Each dish was paired with one of the brewery’s beers, while there was a choice for the salad between a Wheat Ale or Bacon Seraph Caesar. Mrs. Sip and I went with the Caesar, which was good, but should have gone with the beer. The main was combined with an IPA and dessert was joined by a Red Ale.

The Sip Advisor’s birthday is later this month, but we will be away for it and therefore, Mrs. Sip threw yours truly a little birthday bash with friends over the weekend. For this, we attended the BC Derby at Hastings Racecourse. The afternoon was highlighted by many beers (Parallel 49 Gypsy Tears and Granville Island Hefeweizen) gifted to me by friends, incredibly tight and exciting races, and some decent food cart snacks. Mrs. Sip and I broke even with our wagers and wins, although she did better than I did. My two big wins netted 40 and 90 cents, respectively! 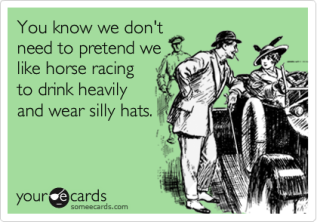 For dinner, we went to Steamworks Brewpub in Gastown, where I ordered a flight consisting of Kanadische Kolsch, Sisu Salmiakki Gose, Smokey Scotch Ale, and Oatmeal Stout. Of the bunch, the Smokey Scotch Ale was my favourite. I also ordered a pint of the Empress IPA, following dinner. The restaurant does something with the IPA that I have never seen before, combining it with Bellini mix. Usually I see this done (if at all) with a lager or lighter brew. I tasted Cousin Sip’s serving of the drink and the two opposites work together, with tastes of bitter and sweet battling it out.

With Mrs. Sip and I heading to South Africa for the next month, Sip Trips will go on a brief hiatus, but we’ll be back with a vengeance upon our return. Keep sipping, my friends!