Taking a trip through your local grocery store, you may come across one of the oddest drink flavours: Dandelion and Burdock. That got me thinking about other weird or odd soda flavours and I found that some companies seem to specialize in this. Here are some of those companies and their eclectic lineups:

Perhaps Jones Soda’s most bizarre release was Poutine. I mean, I love the Canadian cultural dish, but don’t think that drinking the essence of fries, gravy and cheese curds sounds very appealing. Other seasonal releases from the company target holidays, such as Thanksgiving and Christmas and include oddities like Turkey & Gravy, Mashed Potatoes & Butter, Brussels Sprouts with Prosciutto, Wild Herb Stuffing, Candy Cane, and Christmas Ham.

Bacon, Ranch Dressing, Buffalo Wings, and Peanut Butter & Jelly sandwiches. While these are some of my favourite things to have on my plate, I’m actually listing soda flavours from the Lester’s Fixins company. I’ve even used two of the products on previous Mixer Mania drink recipes this year. While the sodas weren’t bad, they are certainly novelty items and not repeat purchases. Perhaps they should have their soda making licence revoked.

In an divisive marketing ploy, Avery’s Beverages has released a line of sodas dubbed ‘Totally Gross Soda’ or ‘Sodasgusting’. While the intended flavours don’t sound too bad, the names alone will likely keep some customers from purchasing the drinks. Options include: Kitty Piddle (Orange-Pineapple), Dog Drool (Orange-Lemon), Bug Barf (Kiwi-Pineapple), Toxic Slime (Blue Raspberry-Orange), and Fungal Fruit (Passionfruit-Lime), among others.

Again, we have some tantalizing flavours… if only you can get over the beverage’s name and imagery produced by it. Releases consist of Pimple Pop (Marshmallow), Dinosaur Dung (Chocolate), Bloody Nose (Cherry), Dragon Drool (Black Licorice), and Pirate Piss (Banana). Some have even recorded themselves trying to complete the Gross Gus’s challenge of drinking some of these products. All the power to them, if they succeeded. 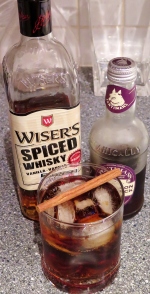 This list does not include Pepsi’s eye-popping limited edition releases in Japan, which include Salty Watermelon, Ice Cucumber, Pink (Strawberry Milk) and White (Yogurt). Only in Japan!

Sip Advisor Bar Notes (3.5 Sips out of 5):
There are actually a few cocktail recipes – although all are basic – offered by Fentiman’s, who produce the Dandelion and Burdock Soda. I settled with this drink, as I wanted to use my Spiced Whiskey. It was actually a pretty good combo with a unique flavour. I’d love to see some more complex recipes for the mixer.