The Easter long weekend found Mrs. Sip and me back in Las Vegas for another wonderful stay on the strip. With Mrs. Sip being pregnant, things are a little different than other vacations, but we still managed to have a ton of fun, despite her not being able to imbibe like the Sip Advisor.

This journey started with our Lyft driver offering to take us to the Total Wine store to pick up supplies. Not wanting to make her regret her very generous offer, I raced around the store grabbing some provisions, such as a bottle of Bacardi Oakheart Spiced Rum and a six-pack of Sierra Nevada Tropical Torpedo Tropical IPA. Mrs. Sip bought a couple non-alcoholic items, but I don’t think either the beers or wine were much of a hit with her.

After dropping off our luggage and buying some walking drinks (Coconut Water for the well-behaved Mrs. Sip), we decided to go for lunch at what has become our traditional first meal landing spot: the PBR Rock Bar. We promptly ordered our favourite dishes in the Doritos Crusted Mac N Cheese for Mrs. Sip and Bucking Bull Fries for moi. Mrs. Sip added a plate of their Cornbread Muffins, just to spice things up.

Given we had stayed up all night, driving from Vancouver to Seattle to fly out early Friday morning, both of us were in the need of a little nap. Staying at The Linq, this was easier said than done, given our room looked out onto the hotel pool and made sleeping difficult throughout the stay, thanks to the 9am-6pm thumping music. I’d stay at the resort again, but request a room as far away from the pool as possible.

Once we did get some rest in, we returned to the strip at night, capitalizing on the free burger coupons we were given in February for the Shake Shack. We both went with the Shack Burger option and split a serving of their Bacon BBQ Cheddar Fries. To drink, I tried the Shackmeister Pale Ale, while Mrs. Sip satisfied her frozen dessert craving with a Peanut Butter Chocolate Shake. 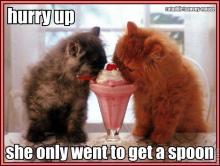 We wrapped up the night sitting outside the Bar at Times Square, enjoying the dueling pianos with a drink (at least for the Sip Advisor), before Mrs. Sip needed to catch up on some more sleep.

The next morning, it was time to see what all the fuss and thumping was about at the hotel pool. In between tanning, cooling off and people watching, I did hit the bar. I elected to try the Cucumber Kick cocktail (Sauza Cucumber Chili Tequila, Watermelon-Cucumber Juice, Lime, Cucumbers), which was pretty tasty. I did get upsold to the $24 souvenir glass version, which did come in handy for later walks with my previously-purchased supplies.

For dinner, we made our way to the Caesar’s Palace Forum Shops and put our names in at The Cheesecake Factory. With only a short wait to endure, we were quickly sat down. I really enjoyed my Southern Fried Chicken Sliders, paired with a Great Basin Icky IPA, while Mrs. Sip went with the Avocado Toast. The meals provided a decent amount of leftovers, which we were actually able to take away for a change, as The Linq has very rare fridges in their rooms.

Back in the room for the night and halfway through our vacation, this seems like a good point to wrap up part one of our trip summary. Join us tomorrow for part two, highlighted by shows and sips!