Got milk? The slogan became a pop culture phenomenon in the late 90s and early 2000s, thanks to the line of ‘milk mustache’ ads, featuring a who’s who list of celebrities during the time. Here’s a look at some of the best posters from the campaign (or at least the ones I felt like lampooning):

Why a Muppet would need milk, I’ll never figure out… aren’t they more energy drink folk? Kermit does look quite dapper in this ad, which also included the tagline: “Milk isn’t just for tadpoles.” 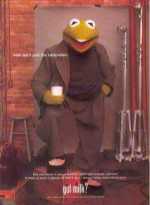 Capitalizing on the popularity of Mike Myers’ secret agent character, the ad featured the spectacled one lounging on a couch, decked out in a silk blue robe (likely post-shag) with hairy chest that simply can’t be contained. Oh yeah, and martini glass of milk in hand wraps things up.

Typically the only white substance under the Aerosmith frontman’s nose is cocaine (aka booger sugar). Tyler’s mouth is iconic, while the caption “Make your bones rock hard” could certainly be misconstrued.

The ad featured everyone’s favourite wisecracking cat with plate of lasagna. I don’t know about you, but I prefer my pasta with a nice glass of wine. 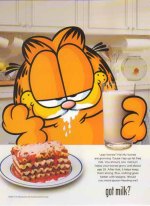 I find it ironic that Lohan’s poster featured the tagline “The height of fame,” especially given the fall from grace her career and life would suffer in the years that followed.

The Jeopardy quiz master has one of the most iconic mustaches to ever exist – with or without milk. Add in the caption “Your bones may be in jeopardy” and that is one clever, if not intimidating ad. 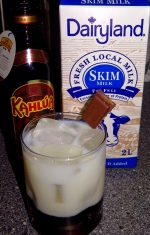 Mrs. Sip actually collected these posters and magazine ads for a time and had her bedroom adorned with them. It was fun to have them in one place and see all the stars who had participated in the campaign.

Sip Advisor Bar Notes (4 Sips out of 5):
I prefer to use recipes that are a little more complex than this, but it provided the perfect opportunity to open my new Kahlua Chili Chocolate bottle. That liqueur packs a punch and I’m happy to say it comes as advertised. I wish I had thicker milk for this cocktail, but Skim is what Mrs. Sip prefers and it worked decently here, helping to cool the spicy Kahlua.