When Mrs. Sip and I recently enjoyed a Vancouver Canadians baseball game, I took great advantage of their Craft Beer Corner, which serves up brews from five different BC breweries. There, I downed a few servings of this Big Rock Brewing mainstay.

The Citradelic Single Hop IPA uses Citra hops, of course, to deliver a citrus and tropical fruit-flavoured experience. The 6% ABV, 67 IBUs beverage was the first to be brewed exclusively at the Vancouver-based Big Rock Urban Eatery and proved so successful that it has been rolled out to Alberta and Saskatchewan drinkers. 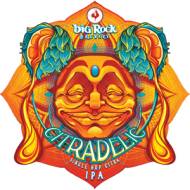 Big Rock staff suggestions for movie and music accompaniments to the Citradelic IPA include Dazed and Confused on the screen and House of the Rising Sun by The Animals on the record player. Colorado’s New Belgium Brewing also has a Citradelic IPA, but I suppose both companies are cool with that.