Moody Ales is a strong collaborator on a number of different releases that I’ve had the pleasure of drinking (1880 Export Stout with Ridge Brewing, Tam O’Shanter Scotch Ale with Bomber Brewing, etc.), so it’s no surprise they would be a contributor on this project. 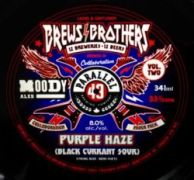 The Purple Haze Black Currant Sour is strong and tart, yet easy drinking. It’s like downing juice that is super awesome amazing. Somehow, I managed to put the two sour beers in this pack back-to-back on my schedule, but that was good in proving to me that sour beers are right up my alley… so long as they are strong on the booze content, as this 8% ABV bevvy is. I was hoping the beer would come in a ‘purple haze’ hue and I wasn’t disappointed.

Each beer is named after a classic rock song and they don’t come more classic than a Jimi Hendrix musical epic, such as Purple Haze. I experimented with the nickname ‘The Experience’ in my younger days, but sadly it never caught on… I suppose it was better left to another legend!