Each month, as part of this 366-day BC craft beer extravaganza that I will be sharing with you throughout 2016, I will highlight a specific style or theme of beers for a whole week of articles. Since March features St. Patrick’s Day and many of us largely associate the celebration with Guinness beer, the Sip Advisor thought it would be a prime month to highlight some of B.C.’s best stout beers.

In late January, the Sip Syndicate descended upon Main Street Brewing for some drinks and before we knew it, each of us was a couple beers deep before Mrs. Sip even arrived. When she did, I insisted she order this brew and get caught up to the rest of us.

The Stag and Pheasant Imperial Stout is definitely of the winter warmer variety. You do feel the 9% ABV, but I was surprised to see it come in at 65 IBU’s, as the hoppiness is nicely hidden. Tastes of chocolate, coffee and what the brewery calls “a touch of pine” are present with a “hint of smoke” on the back end. 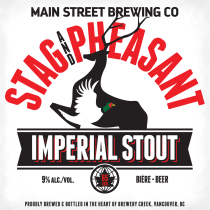 The stout is named after the Stag & Pheasant saloon, which existed in Vancouver’s Gastown neighbourhood in the late 1800’s. The establishment was owned by Charles Doering, who sold the business in 1888, in order to enter the brewing game. Doering would go on to co-found the Vancouver Brewery which all these years later has been converted into the home of Main Street’s Brewery Creek location.

Originally released in 2014, I look forward to future engagements with this beer, as well as returns to Main Street Brewing and its historical site.